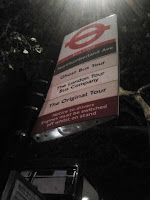 I love Halloween and I celebrated it in quite a big way this year I think, going to four different things for it. One of which was The Ghost Bus Tour. This runs all year, but it seemed a good idea to go near Halloween, an idea which clearly a lot of people share. They put on extra tours around this time of year, and our bus was sold out. Having had a drink over the road at the Sherlock Holmes, safe in the knowledge we'd get there on time as it departs from outside the pub, when we did turn up, everyone else was already there.

It didn't really matter though - I wouldn't say some seats are particularly better than others, and they have screens up at the front and back of the bus so you don't miss any of the action. And yes, there is action, for this is no ordinary sightseeing bus, though they do a good job of that too. This one comes with all sorts of extra frights and kooky creepiness. Perhaps a leetle too hammed up for my taste but it was all a lot of fun, and the children on the tour really got into it. One poor kid had to put his hoodie up and his hands over his eyes, during the really 'scary' parts lest he not last the journey.

You start at Northumberland Avenue and in the hour and a quarter that you drive through London you go all the way into the City and down into Bankside, pausing on occasion, and being told about all the gruesome and ghostly goings-on that have taken place along the way. I actually learned quite a lot on the tour that I didn't know already, for example: 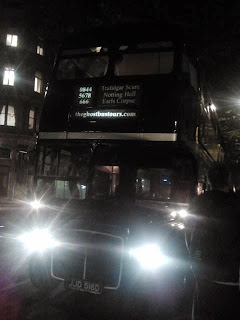 But that's not all. Interwoven along the way is the bus's OWN grisly history, which is revealed little by little. The guide himself, Marcus McGuffin was quite entertaining and clearly of a theatrical bent - his attitude is that we're all on a normal tour guide, please ignore any odd happenings - all perfectly normal... and then he'll give a worried glance to camera to ensure you know all is everything but. 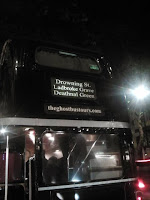 Partway through the tour we were joined by an inspector checking the bus out for any supernatural evidence. And guess what? She finds some, and this is the catalyst for being plunged into your own little ghost story, with the inspector becoming increasingly hysterical along the way, whipping up the little'uns fright quite effectively. Complete with flickering lights, strange, eerie creaking and moaning, you have a veritable mobile haunted house.

Once the true history of the bus is revealed (I won't give it away) the denouement is a seance to commune with the spirits. I'll let you have a go for yourself to see what the spirits had to say...

As a way to see the city it's actually really good, and the extra theatrics are a lot of fun. It's absolutely perfect for Halloween but I'd recommend going at any time. I thought it was brilliant.
Posted by Ginglesnuff at 3:42 PM

Email ThisBlogThis!Share to TwitterShare to FacebookShare to Pinterest
Labels: Ghost Bus Tours, Halloween, things to do