**Warning - this post is not for those with short attention spans - it is almost as long as the queues at Night Tales!***

It's always nice to be in on something from the very beginning, so I was pleased to go along to the launch of Night Tales on Thursday, a new weekend-only (cos Thursday totally counts as the weekend these days) sort of night market. Unfortunately, this is London and everyone else also likes to go newly opened events so the night was very busy.

Luckily, I anticipated this and most of my friends and I got there before 7 and got in without having to queue. Many others were less lucky and a couple of my friends turned up and took fright at the size of the line, choosing not to even try to get in.

By 8:30 the place was absolutely heaving. There was a great party atmosphere. Actually, I would describe it more like being in the kitchen of a party, or the outside of a club. You could still hear the music enough for the beats to be infused into the crowd and make you feel good, but it wasn't so loud you couldn't have a good chat to your mates. The smell of cooked meats wafted over everyone, rousing the appetite, as did the smoke from the various grills at work, and the open fires. 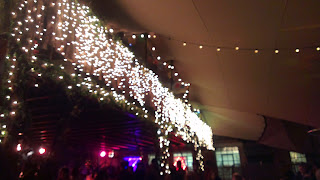 They had promised cover and warmth and this they did deliver. There was a canopy overhead and so many outside heaters that you could almost forget you were outside. Those that had 'layered up' admitted there was no need to do so.

There was a normal bar at the very back, a dedicated Negroni bar, and upstairs a Tales of Mezcal bar from the people behind Qui Qui Ri Qui which was on Hackney Road but now pops up at things like this. They were one of the reasons I wanted to come here. 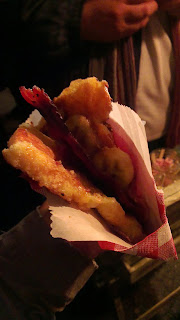 Foodwise you could choose from Young Foodie winners Bao's steamed buns, Rainbo's gyoza, Patty and Bun doing what Patty and Bun do best (burgers) and Smokey Tails (more on them below). For dessert Le Petit Paris (the only other food stall I hadn't tried before) were serving French Toast with either peanut butter and jam, or bacon, banana and speculoos spread. I have just looked up what this is and it's a caramelly, gingerbreadlike crunchy spread, based on the Dutch biscuits. I had this latter one for dessert and it was truly amazing. Sweet, salty, slightly crunchy. What a find.

I had a drink from the Tales of Mezcal bar to start with - what a lovely crew was running that bar. We went up when it wasn't so busy and they were happy to chat through the various Mezcal-based cocktails on offer. They had reams and reams of mezcals to choose from but I wasn't quite ready to dive into neat alcohol yet so I went for a cocktail that was a take on a Margarita - you could choose to have it with cucumber for a cool drink or spiced up with chilli. I couldn't resist spicing it up and the girl behind the bar asked me what level of spiciness. I said I wanted to be able to taste the rest of the drink but that I liked it spicy. After proclaiming her love for me (don't tell her boyfriend) she put some tabasco and some green chillies in it. Delicious! I went back at the end of the night and ended up having a glass of their cheapest straight mezcal, which honestly did sound like one of the nicest. It was much smoother than you might expect, had the typically smoky mezcal taste but also a hint of sweetness. All of us who tried it thought it was really drinkable. 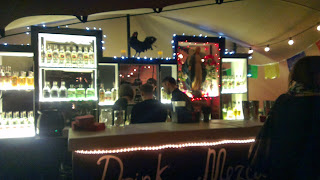 I also tried my second Negroni ever. And again, didn't like it so much at first, but it's pretty much all alcohol so halfway through it had really started to grow on me. The Negroni bar has about ten different variations - I went for the English one with Gin, Kamm & Sons and Punt e Mes. I had a sip of someone's Sbodaglio (or something) which had prosecco in it - that was really good.

I did have a couple of gripes with the place - firstly we all thought that entry was free but when we got there we were asked for a £3 'donation'. Night Tales didn't mention this anywhere in its promotional stuff or on the FB event. It was such a paltry sum that I didn't protest, or point out that if it's a donation then I should be allowed to get in without giving it; it was pretty obvious that no donation = no entry. And then, when I met up with my friends it turned out that some of them got 'Night Tales membership' cards for their 'donations'. No one really knew what this meant but I hope it doesn't mean that future visits are free if you have one of these cards, but not if you don't, because I wasn't even given the option!

My other overall gripe would be the size of the cocktails. They're so dinky. I'm not saying they're not boozy - they are - they are concentrated booze. Which is good in one way, but in practical, sensible terms, having such a small cup means you finish it very quickly, and it takes a lot of willpower to pace yourself. Cynical moi thinks they rather hope this is the case so that you buy more than you normally would. 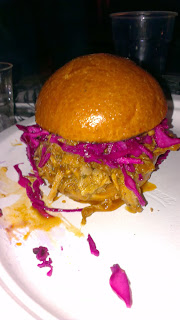 Not having made it to Seth Troxlers place in Hackney Wick over the summer, I was delighted that they were upping sticks to Night Tales for the winter. Again, I timed it well - putting my order in for the pulled pork and being served instantly. A short while later and there was a 20 minute wait. My friend ordered the smoky mac and cheese. He was disappointed with his dish - said it wasn't very smoky and nothing to write home about. (Had he had it later in the evening when smoke was clinging to everything, it might have been a completely different dish.) I absolutely loved my pulled pork bun. It was served with a tangy red cabbagey coleslaw on the top. The pork was ever so juicy and tasted great even on its own - I made sure to have a forkful - but was even better with the cabbage. The brioche bun was perfect for it and just about held up to the juice, though the edges did get quite deliciously soggy.

What I would say though, is that the serving was pretty small, verging on slider size. Not quite slider size - more like slider's older sister, but a little too small for the £7 price tag. I definitely had room for more after finishing it. 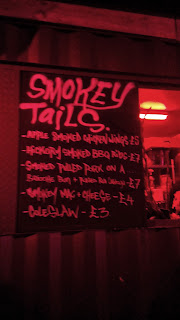 A couple I was with shared ribs and the pulled pork and the ribs were declared even better than the pork. One of my friends got the chicken wings but didn't manage to finish them so I had a half a one. These were quite heavily coated in a spicy sauce and were also delicious. Smokey Tails know what they're doing.

I had a good evening here and could be tempted back for some more of the Mezcal and Negroni drinks on offer, and also the ribs from Smokey Tails (and to hear Seth Troxler if he makes an appearance). But the food trucks here are static - there will be the same people each week, although I don't know if their menus will change, which makes coming back less of a draw, especially if I have to pay £3 entry each time.  Street Feast have returned at Hawker House in Bethnal Green where the entry is free (before 8pm) and there are more food trucks on offer (and it looks like they may have different menus each week) meaning you can get something different every week (I haven't been yet, but intend to on Friday - Watch This Space). So if I were to go back to one time and again for a food-based visit, my hunch is that I would end up returning to Street Feast.

But if you take into account the DJs Night Tales are lining up, which will be different each night, then that could provide the variety you need to keep coming back. I would say Night Tales is well worth a visit, and if you haven't tried any of the food trucks parked up there, it's a must.

And I haven't even mentioned the creepy exhibition in the dank bunker...
Posted by Ginglesnuff at 2:49 PM