As I suspected, the We're Gonna Need a Bigger Boat film quiz wasn't a walk in the park. When they give you clues ahead of the day, you already know that if revision is required you're probably not going to waltz in and be victorious. But neither was it completely out of our league and I was quite pleased with our efforts overall, even if we did think we had done slightly better than it turned out we had.

We're Gonna Need a Bigger Boat is a pub quiz that actually only takes place in one pub out of the three venues it travels to, and is a film-based quiz. If you've ever played the board game Scene It, you'll have quite a good idea of what the night entails. We went to the one at The Boogaloo in Highgate, which is a cool pub that has lots of indie nights on normally. I plan to go back for one of these. 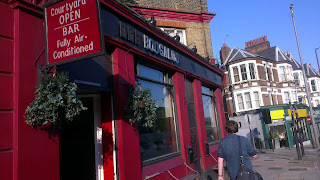 So, the film quiz is on every first Wednesday of the month at the Boogaloo in Highgate. It starts at about 7:30 and when I got there at about 6:30 almost every table was full. It's a popular night. Entry is £4 which is a little steep for a pub quiz but it does mean that the materials on which to record your answers are top quality, and shiny, and it's obvious that a lot of time and effort goes into the AV of the quiz. You can have as big or as small a team as you like. Bigger definitely seems to be better, but with five on our team I think we did well for our size. The team that came in third had eight or so members and something like 13 more points.

I duly did some revision on all of these, but of course it wasn't that straightforward - the clown picture round was probably the most tenuous. Every picture was a still from a movie, and yes, featured a clown. You just had to say what the movie was, you didn't even have to name the clown. But while I had revised clowns in films, some of these clowns weren't even the main focus of the film. I'm not going to give *any* answers away as I know this same quiz has two more outings this month, but as an example, I came across the 'clown' in The Game in my research. I didn't think that would be likely to come up as it wasn't a) real and b) a main character. And it didn't come up. But judging by the ones that did, it easily could have. I must say I was rather proud of myself for, at the last minute, pulling two of the correct answers from the deepest recesses of my mind.

There were about ten other rounds besides the picture round, starting with Posters. You're shown the poster of a film, but with the title stripped out. This was fairly easy, except for the last 'wildcard' B-movie poster, but even that was guessable if you just 'say what you see'. Unfortunately we overthought it and got it wrong. It didn't help, for this and other rounds, that we had one of the worst tables in the place  the screen was on a sideways slant from where I sat, which meant I could barely make out what was actually being shown on there. The last poster had a crab on it apparently. I thought it was a kraken. 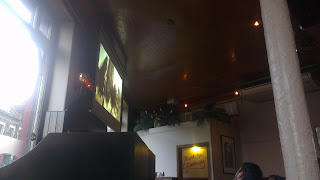 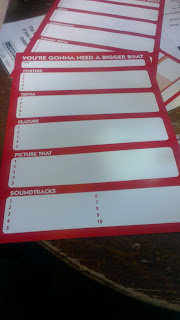 The hardest rounds for us were definitely the Picture round which was Sci-Fi based - probably my weakest subject when it comes to movies - and the trailer round at the end. They played nine trailers on screen, with a tenth playing over the top. Not having been to the movies in a while, I pretty much guessed at what the trailers might be for, based on ads I'd seen around the tube. It didn't help that, like I said, I could barely see the screen, or that on first play, I completely didn't understand what was happening. I thought they were going to show each trailer (or snippet of) in turn but actually they mashed them all together, chopped up into one long trailer. I kept wondering when the one for World War Z was going to end and the next one start. (I know I said I wouldn't give any answers away but if you don't get this one, then you're in desperate need of a free answer). Thankfully they played them all again and we could have a better stab at guessing them, as guessing is what we were doing.

Even though the quiz wasn't a walk in the park, I enjoyed taking part and think we could do better next time. The MC was quite generous with the clues along the way, so while it did get your little grey cells working, the whole quiz didn't feel so hard it was discouraging.