I think I only found out about this night when one of the girls who runs it started following me on twitter! I love twitter - such a good way to discover things I might not otherwise have known about. I took a little look at their website and thought this was just the sort of thing Stephen and I would enjoy. I couldn't make their first one and it took a while for them to get another night together but finally I had the opportunity to see what they were all about  in the flesh.

Afterwards, I asked Stephen if he had enjoyed a night of erotica clearly aimed at the discerning lady. He claimed surprise that it was women-centric considering the amount of female flesh on show. But that didn't surprise me in the slightest. I would wager a lot of sexually charged women would admit to finding the female form sensual and attractive. The clue to the female friendly focus was what you didn't see - in the hour or so I was there there was only one bj clip, and the penetration was limited to short bursts, leaving you wanting more rather than finding it dull and repetitive. There were quite a lot of shots that 'teased'; a shirt being pulled halfway up, a hand going down the front of someone's knickers before cutting away to something else. After all, half the fun of sex is in the anticipation and the foreplay. 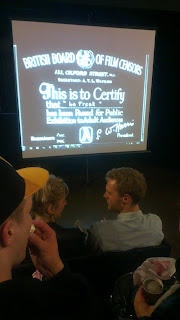 I thought the music which accompanied the montages was excellent - quite stirring in itself (one song I remember in particular was The Horrors' Still Life). It was music that would make it on to my 'Mood music' playlist even without being combined with such sexy scenes.

The people running it are super friendly and they even had popcorn and love 'O' bags for singles and/or couples on sale for your immediate and delayed enjoyment respectively.

There were a couple of gripes I had about the night however and it turned out Stephen had the same ones. One was the location. It was a little far from where I live and so some of the lusty side effects of watching all that 'smut' had worn off by the time I got home! No, not really - while that is kinda true, that's not something I consider worth moaning about.

What I really mean by the location was the comfort element. The theatre part of the Lord Stanley was tiny, the seats were hard and very close together. Watching that kind of material, you really want to be able to lean back and relax, get comfortable and snuggle in to whoever you've come with to really luxuriate in your voyeurism. Somewhere that felt more like the bed you were no doubt thinking about getting in when you got home - somewhere with sofas rather than hard backs jabbing in your knees.

But, I know this was only La Freak's second coming, so they're only small and probably can't get their ideal venues just yet. Hopefully that will come in time. Having never even been there I don't know if my visualisations are accurate or not but I can imagine this night working well at the Aubin cinema in Shoreditch for example which apparently is quite a glam cinema.

The other thing I thought could be improved lie in the format of the night. And perhaps it was because I knew we couldn't stay the whole night and so I wanted to see as many clips as possible in my short time there, but I felt there didn't need to be so many intervals. They lasted too long compared to the video montages, sometimes being as long or longer than 'the good bit' I'm sure! (Not including the 20 minute half-time interval.) I understood their purpose - the idea is to drop in and out of the viewing, and the intervals provided points where you could do that - to feel free to have a chat or go and get another drink etc, without disturbing anyone. But they still felt too frequent, and the images were somewhat repetitive (although pleasing to the eye admittedly). I guess if we were in a larger venue people wandering in and out wouldn't be so disruptive to the main movie and the intervals wouldn't be as necessary.

But on the whole, I would go again, and I would recommend it to anyone who likes a bit of public arousal. I would love to see them teaming up with other risque or sexy nights as well. I can imagine them having a screen at a Last Tuesday Society event for example. And they certainly wouldn't have gone amiss in the dark room at the Dark Circus party I was at on Saturday.

So, keep up the good work girls, hope it keeps getting better!

Posted by Ginglesnuff at 1:14 PM