I had quite the Bourne & Hollingsworth weekend.

Firstly, on Friday I went to their roving bar 'The Fourth Wall'. This is a replica of their bricks and mortar establishment in Rathbone Place, which pops up in all different places. If you are on their mailing list, you are emailed a couple of days in advance of them popping up and given a clue as to its whereabouts. So, on Wednesday when I got an email written in semaphore, I decoded it to give an address and booked me and my friends in.

Now, I knew that B & H were doing a summer-long affair called Kitchen Party which promises good food, drinks and happenings, and also the Fourth Wall as its bar, but I didn't realise that it was the same Fourth Wall bar (i.e. I thought there would be one at Kitchen party and another which travelled). I must admit I was a little disappointed when I turned up and it was the one at Kitchen Party, as it rather rendered the clues pointless when anyone can look up where Kitchen Party is residing over the summer. And, also, unlike other Fourth Walls, this one is clearly there for quite the long haul.

Perhaps that is why it wasn't very busy at all. Most of the other drinkers there seemed to just be having pre-dinner drinks before heading into the dining area which made the Kitchen part of the party. Or maybe the semaphore was just too much effort for most to bother decoding.
As it got a bit later and the diners drifted into the sit-down section, the bar was rather quiet. I do like a bar where you can sit down and hear yourselves talk over the din of fellow drinkers but I do also like there to be some fellow drinkers.

Still, quite enjoyable, and it did deliver the 'granny chic' I had promised to my friends, in its chintzy wallpaper, faded and peeling at the edges. They also had one cocktail that was served in a teacup which I had looked forward to having but it did have a tea element in it which put me off. So I didn't. Instead I had one served in a cute little jam pot.

I had several cocktails which were all quite nice. I made sure to have the famed Re-Bourne cocktail as my first. It was light and refreshing, constituting of gin, lime juice and elderflower, topped with lemonade but it didn't make me sit up and take notice. The Rose 75 - rose and raspberry syrup mixed with gin, lemon juice and topped with bubbly was more interesting. At first sip it tasted like Turkish delight but in a nice way, and as the cocktail matured this became quite subtle. Very nice and different to any other cocktail I've had. For my third and final drink I had the margarinha which was also a tasty cross between a margarita and a caipirinha. My favourite was definitely the Rose 75 though.

Admittedly, they didn't have the showmanship or inventiveness of some other cocktail places I've been to (Opium or Purl for example) but then again, you don't always want that from a cocktail. Sometimes you just want something straightforward and reasonably priced to sip at (these were all £7.50-£8.00 compared to £10-£12 at other cocktail joints). Stephen's complaint, as ever, was that they were so small and he is right - you have to be very judicious with your sips to make the ones served in martini-esque glasses last.

They had a DJ set up in the corner where we were seated, playing some hip hop and smooth soul. Very appropriate for background lounge music but up-tempo enough to be good music to get you going if this was only your first stop on a night out. I recognised the DJ as the same guy who'd been incredibly enthusiastic at the first Belle Epoque night I went to and he was no less into his music this time either. 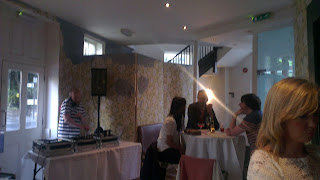 I got there a little later than my friends and apparently there was just one weird thing that happened. I'd made a booking for four you see, and when they got there they were ushered towards a table which was clearly only big enough for two. When Stephen explained we weren't going to fit, the hostess said that we didn't all need to sit at the table together. Stephen rather disagreed and managed to get us a table where we could all sit at the same time. Bit of an odd approach to reservations and seating!

I'm glad I've crossed the Fourth Wall off my list but I doubt I'll be making a repeat visit - I'll just stick to their themed parties, which often serve similar drinks - The Gatsby makes an appearance at Prohibition, and a version of the Re-Bourne was on offer at the Blitz party. 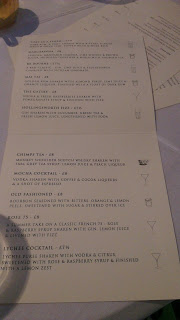 Posted by Ginglesnuff at 7:35 PM