I knew Opium was tricky to find. I already warned my companion to keep her eyes out for signs of it, and I had the exact address on me. And we walked right past it, standing on the corner near where we were sure it must be, unable to see it. And then, I spotted him. A lone burly man standing in front of a door. A door to Opium.

We walked up and saw the discreet sign. We said hello and informed the doorman that we had a reservation. A word in his mike and a response from his earpiece and the door was swung open and we were told to head to the second floor where we were greeted and lead up a further storey. We were seated by the window and our waiter came along to furnish us with menus. Three storeys high, we gazed down on the hustle of Chinatown, feeling smug that the people walking by had no idea we were up here or what lay behind that innocuous door. Around us on the shelves were title upon title of books pertaining to the art of alcohol and behind us was what would be described as the "chef's table" had we been in a restaurant and not a cocktail bar where the drinks were mixed up.

The menu: two pages of speciality cocktails, one giving a rundown of the classics, several pages of "prescriptions" (spirits) and on the final page, the dim sum. There were two cocktails that stood out for me for being intriguing. The first one I went for was the Royal Plums, mainly because it sounded a bit risque, but also because the use of plums in cocktails isn't something I'd come across before. It had a tequila base with chinese plum wine, poached black plum and rosemary syrup. It was served with a sprig of rosemary as a garnish - sooo aromatic to drink. The top had a thin sheen of broken ice and there were specks of the black plum in it. 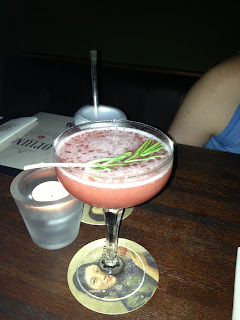 My friend couldn't quite make up her mind and asked for a recommendation. Our wonderful waiter Oscar suggested she go for the Opium Cocktail No. 1. This was quite a spectacular cocktail that came with a side of theatre. Two types of rum and absinthe, mandarin juice, lime juice and a ginseng capsule. The receptacle was placed and the ginseng poured into the capsule, then the rest of the cocktail and then the mist began. And continued for the duration of the drink being consumed. It was beautiful. As was what it was held in. With it's little metal pipe sticking out we were of course reminded of the cocktail bar's namesake (not that we have any experience of smoking opium ourselves). 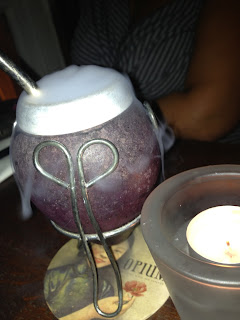 For round two my friend went for some bubbles in the form of a kir royale and I joined her, by ordering the Kung Fu Fizz. What a drink! My favourite of the night by far with a completely unexpected taste to what I imagined from the ingredients. A champagne base with parnsip puree, honey and sweet black asian malt, I thought it might be quite a thick, sweet "dessert cocktail" with two such sweet components. But it was lifted by the champagne and malt I suppose and was incredibly refreshing. It did taste of parsnip but in a way that made you think parsnip in a drink was completely normal; it belonged. This was served in a cute teacup, continuing the Chinese parlour theme. 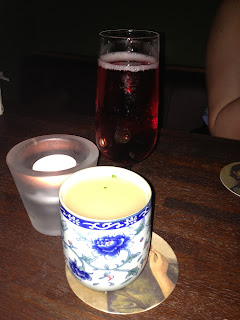 To accompany our libations, we ordered some of the delectable-sounding dim sum. To start we had the crab and fennel dumplings and the lobster prawn toast. Both were delicious, but we felt that just two more dumplings wouldn't have gone amiss for the price tag. Although, it has to be said, they were far cheaper than the cocktails! The crab dumplings were 7 pounds, the toast 9.50 (well, it was lobster). Both were tasty but my favourite was the lobster toast which was really plump and juicy and the spicy tomatoey dipping sauce went well with them. 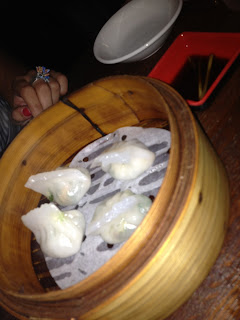 To follow up, we had the scallop, coriander and pea dumplings. These were tasty but not quite as tasteful as the crab versions. The scallop was slightly masked by the pea flavour. Again, I thought there could have been  more filling. And if I were to be very, very picky I would say that maybe the dough was a little thick - at least at the top where it was pinched together, which wouldn't have been as noticeable if there had been more filling.

We spent a couple of hours there which was enough to lighten our wallets considerably and also fill our stomachs satisfactorily. The bill came to a whopping 86 pounds, so this is definitely a place for a special occasion, or when you want to impress someone. I was kinda doing a bit of both.

Find the menu & restaurant information on Zomato
Posted by Ginglesnuff at 3:36 PM