Taking place in the daytime on Shrove Tuesday, as it does, and me not willing to take time off to attend, I only this year managed to be a spectator of the Great Spitalfields Pancake Race.

The whole thing lasted barely half an hour - it's really for the people who work in that area, or who are students hanging out in the Big Chill anyway, as it takes place in Dray Walk off Brick Lane.

I actually got down there a little later than planned so missed the beginning of the race and probably all of the rules and regulations being set out. However, it was fairly easy to surmise what was going on. Each race was between four teams of four. It's a relay race with the first person racing up to the other end, pausing at two intervals to flip their pancake, and then passing the frying pan over to their teammate, and repeat. 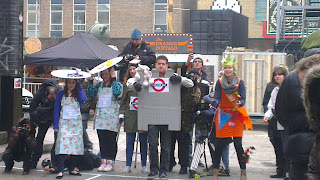 It really is quite silly fun to watch people running the short distance bearing these unwieldy cooking instruments, with the crowd lining the track cheering them on or groaning when a pancake ends up on the floor. To add to the merriment, many of the teams dress up in fancy dress, often to reflect their silly team names. The 'referees' are also dressed somewhat exuberantly. I wouldn't quite call them clowns, but their garb wasn't far off. Colourful, with bits sticking out of everywhere, only minus the over-sized shoes. These guys were there to make sure participants did their two flips at the allotted points (although I did notice that some of these flips didn't quite make it all the way over). 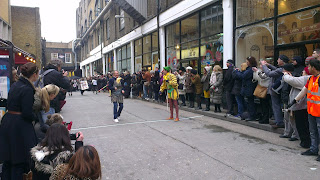 At the end of the race there were prizes for the first three teams, plus a prize for the best team name, best costumes, and, rather bafflingly, best behaved team! 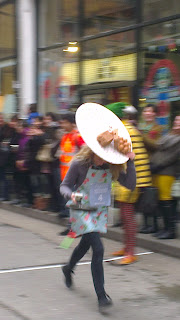 And of course, there was a crepe stall set up right by the event, to take advantage of it being Pancake Day and seeing all those pancakes sprint past you making people want one of their own.

I wouldn't advise taking time off to go and watch the event, but if you're in the area, it's definitely worth a look.

Posted by Ginglesnuff at 3:39 PM