When you go to as many cabaret/burlesque nights as I have done, you do start to wonder if you’ve seen it all. And then you watch performances such as those I witnessed the other week and you realise that those at the top of their game can still wow you.  I think the difference between the artists who entranced us on the 16th (and I’d put those at Boom Boom in this category as well) and other more run-of the-mill acts is the way they have a bit of a story to their act – the way the music that they perform to complements the moves. It’s choreographed, it’s stirring. There’s attitude. These aren’t just circus acts. 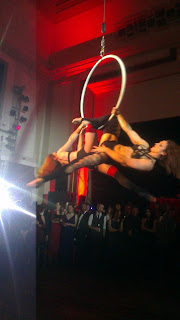 The only disappointing thing about the aerial acrobatics at Belle Epoeue was that there wasn’t more of them! Although I suspected the last act would be at around 11 to ensure those wanting to get the last tube could do so without missing anything, I still would have loved for the entire evening to be peppered by them.

Having said that, the rest of the clientele probably wouldn’t have been so happy. Unlike other vintage nights I’ve been to, this one had a decidedly school disco feel to it. It wasn’t just the music being played, it was the lairiness of the crowd; by 11 pm people were raring to concentrate on the cocktails and champagne, rather than the acts. One girl, out for her birthday, fell over while she was seemingly just standing there, some guy dived through the hoop while we were waiting for the act to start. At the end of the night people were copping off with each other like it was Sixth Form revisited! It was slightly surreal – everyone dressed in a variety of styles from burlesque to vintage to lion tamer, yet all most definitely dressed to the nines, getting down to, at one point, gangster rap, and snogging. I wouldn’t have been at all surprised if Gangnam Style had been played at the end, but I’d left at that point.

It’s not that I didn’t like the music. For the most part I thought they were all pretty good party tunes, designed to get people moving on the dance floor and that they did. There were only one or two selections that were a little too cheesy for my taste. But it was definitely very mainstream, which wasn’t what we were expecting. When we arrived they were playing 50s and 60s sounds – Little Richard, The Kinks, Aretha, and we assumed this was the theme for the rest of the night. Even though it probably wasn’t what the Belle Epoque era was soundtracked to, it was at least retro. But they very quickly moved through the decades to the present day – I appreciated the Jamie XX remix of Rolling in the Deep they dropped.  But we wondered where they would go from there.  The answer was, all over the place!

I rather enjoyed the DJ’s antics – he was almost a caricature of a DJ, his arms waving all over the place as he conducted us on the dance floor from Song 2 to Skeelo and back again through a variety of mashups.

So, the music was what you could find on any highstreet but I would happily return for the aerial acrobatics. There was 'silk rope' work with a couple practically dancing like ballet together through them. 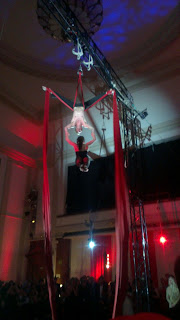 There was a duo hoop act, portraying an S & M lesbian relationship. The first act used a bungee harness! 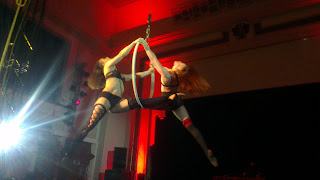 And there was another 'rope' act, only this time using netting which the performer could tangle himself among. 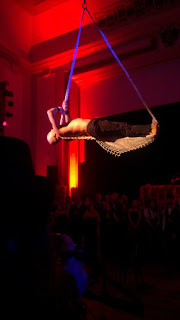 And the finale were three girls on bars choreographed to perfection. 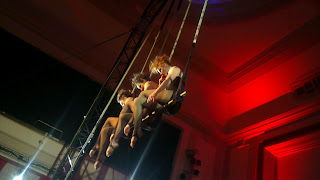