Apologies in advance for the quantity and quality (or lack thereof) of photos in this post. We were the youngest diners in the restaurant by at least twenty years, and with my fellow patrons not being of the blogging and tweeting generation, I felt conspicuous, in such an esteemed establishment, taking the few photos I did.

Le Gavroche is the opposite of contemporary in decor, but without being staid. You feel comfortable in your surroundings, as if you're sitting in a favourite wealthy uncle's library. There is no background music - Le Gavroche gets booked up months in advance and so can rely on there being a soundtrack of chatter and clinking to distract you from the sound of your companions eating.

We were offered a glass of champagne each on the house (perhaps because it was so close to Valentine's Day?) and soon after our canapes arrived. An egg salad 'tart' adorned with three coral beads of caviar and a finger of chorizo wrapped in pastry. This was my first taste of caviar and I must say I liked it although even such a small amount was so fishy I can't imagine eating it by the scoopful. It made me feel like I was eating sushi. The chorizo pastry was gorgeously salty and meaty. Wouldn't have complained if there had been one or two more of those.

Next up was our amuse bouche - smoked eel with the lightest, subtlest horseradish cream I have ever tasted (because I dine on this kind of stuff all the time don'tchaknow). And the eel was another first for me but this was fine dining and of course it bore no real resemblance to it's natural form. It was just a perfectly shaped piece of fish and quite a delicately flavoured one at that.

At about this time our order was taken. We had decided to treat ourselves for Valentine's Day by coming to Le Gavroche but that doesn't mean we were suddenly flush with cash - we had decided to choose lunch here for a reason. They do a set lunch for only 52.60 which includes three courses and half a bottle of wine. (Bear in mind that a main from the a la carte started at around 30 pounds and you see what an excellent deal this is.)

There was a choice of three for each course. For some reason the set menu was all in French, whereas the a la carte menu gave you the translations. This wasn't really a problem as my French is pretty up to scratch (at least when it comes to food) but there was one item I couldn't puzzle out even with the context. Our waiter was more than happy to help and I ended up ordering this for my starter -  the veloute de topinambour, or Jerusalem artichoke. This came with iberico jamon and more artichoke in the bowl and then the velvety veloute is poured over them.

What a deeply rich, buttery and savoury taste this was. If I hadn't know it was artichoke I probably wouldn't have been able to place it, it just tasted delicious and 'rooty'. The mouthfuls where I had some of the ham with it were fabulous - the touch of saltiness it added working perfectly. I think this was actually my favourite dish of the meal! 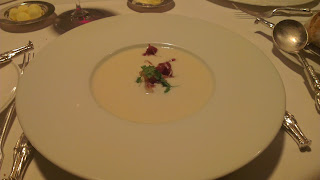 Stephen chose the pan fried seabass with chive butter and said it was a very fine dish, though he commented that once again, in a high-end establishment, the skin wasn't crispy! We surmised it had been fried only on the one side as you could see the bottom was cooked through and it grew more translucent towards the top.

We both ordered the lamb neck on beans with wild garlic for our mains. Our first bites of the lamb were a little on the dry side but it soon gave way to pink, slightly fatty, tender meat. The bean and puree provided a worthy accompaniment, and there was some token green stuff to make us feel marginally healthier. 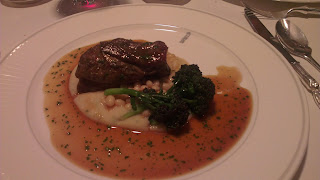 By this point I had availed myself twice of the bread basket yet still didn't turn down the chance to complete the hat trick - there were three varieties of home baked bread on offer, and therefore three I had. With a choice of salted or unsalted butter that was replenished as soon as a dent was made in it, each kind was moreish; a rustic campagne, a French bread and a light, chewy rye.

I made an unusual choice for dessert for me - I went for the ice cream and sorbets option. They wheel over their cart of ice creams and scoop the flavours you want at the table. Taking the advice from our neighbours who were very friendly and obviously seasoned fine diners, I had a scoop of each - wild berry, pear, blood orange (my favourite), milk chocolate, vanilla and one other I can't remember! 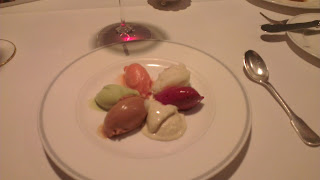 Stephen had the cheese platter, instigating another trolley being wheeled over from which you can make your selection. I was too timid to take a picture while it was at our table, but I took one from afar. Cheese trolley? Cheese 16-wheeler more like!

Cheese was served with yet more butter, and some wholemeal 'melba toast' studded with fruit and nuts. Quince, a chutney and celery were served as relishes. I can't remember exactly which cheeses he chose, but all were, predictably, lovely. (I'm almost never going to say anything different about cheese.) 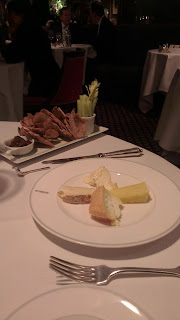 To finish we had the customary petits fours - a sweet marshmallow, a brandy snap, a candied kumquat and a miniature perfect pistachio brownie. Our kindly neighbours tried to encourage us to order a second serving of these, as we seemed to like them so much, and although I was tempted, if only for that brownie, we had eaten quite enough by then!

Service was polished and attentive, mostly with a smile and a willingness to answer any questions, though for some reason the man devoted to keeping our glasses refreshed was rather stern.

Eating at Le Gavroche is obviously not something I can make a habit of, but it was perfect for a celebratory occasion. I loved Pollen Street Social for its laid-back, accessible feel, but when you really want to spoil yourself, you want a place that feels grand and special. Le Gavroche is definitely that.

Find the menu & restaurant information on Zomato
Posted by Ginglesnuff at 9:53 PM