After my breakfast at Maltby Street Market, I strolled along up the Southbank, taking in a few of the spots on my Map of London Peculiars, and working towards Westminster Bridge Road, another thing on my list from Time Out’s 1000 Things to do in London. I was already beginning to feel a bit peckish and remembered that Engine hot dogs is now perched outside the National Theatre. I’d wanted to try them so I stopped by and got myself a regular hot dog. They had three other variations with various toppings, but I thought it was best to keep it simple to determine how good it was. All I added to it was ketchup and the interesting-sounding lager and lime BBQ sauce. Alas, even these two basic condiments were too much for the Engine hot dog. They completely overpowered the flavour of the dog itself. Now, you might think that it is my fault for choosing sauces with their own distinctive flavours, but I think if you’re going to have a choice of condiments, you shouldn’t be serving hot dogs that are all too easily masked by them. I tried a bit of the frank on its own and it wasn’t up to much – it seemed like a typical English attempt at a hot dog: weak and watery in flavour. The bun itself was quite dry. Rather than waste calories on it, I actually threw half of it away! The other versions you could order had stuff like coleslaw and chilli-salt pickle spears, or teriyaki sauce and wasabi mayo. Perhaps the hot dogs are intentionally bland and in fact the main event is the unusual toppings you can put on them? I’m not sure, but I’ll be sticking to Big Apple Hot Dogs in future. 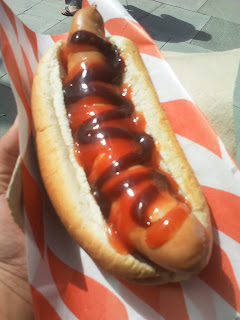 So I went up to Westminster Bridge and walked south down it. Soon enough I came to no. 121, a gothic looking building that doesn’t disguise the fact that it looks a bit like a railway arch. This is because it used to be the terminus for the London Necropolis Railway, which opened in around 1850 to transport corpses from London to the outercity cemetery in Brookwood. The London Necropolis Company hoped to be the sole transporters of bodies to outer London but it didn’t really take off, and after the London station was bombed in WWII the line was closed down and the terminus reinvented as an office. 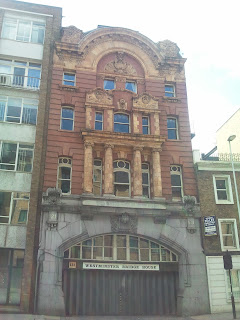 I then wandered a few feet further up and came to no. 100 Westminster Bridge Road, a building that is the antithesis of the ex-railway station being all modern, curvy and shiny. This is a block of flats called The Perspective Building and used to be where MI6 called home, and instead is now where Kevin Spacey and other rich people live.  I was actually quite underwhelmed by this building. I was expecting something more imperious. Perhaps the façade hides lots of ‘spy’ type touches inside. 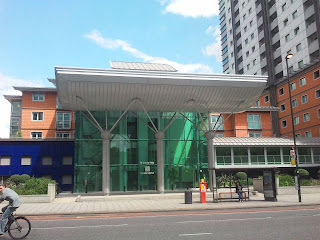 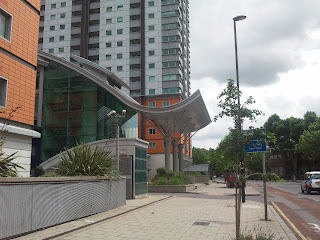 Posted by Ginglesnuff at 1:52 PM