I shall keep this entry relatively short and sweet as there’s not a whole lot to say on this one. 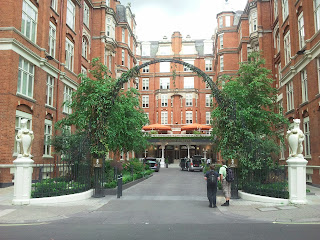 After my little sojourn down Westminster Bridge Road, I crossed the bridge, and in keeping with the government/spy theme walked through the crowds near Parliament and made my way to St. Ermin’s Hotel off Victoria Street.It is said that this hotel was privilege to several covert conversations – a place where real spies used to meet to discuss their trade secrets, and also where MPs used to gather, being so close in proximity to Parliament. In fact, the bells that summon MPs back to Westminster to vote still rings here. And apparently, how did they make their way over there? Not by street, like a common person, but through an underground secret tunnel. Which apparently you could get to through a door in the stairs.

I was a little nervous walking in to such a grand building as St. Ermin’s Hotel, knowing that I wasn’t even a guest there and not really knowing what I was looking for. However, I gave the doorman a friendly nod and smile, as if I was just popping in to fetch something from my room and had a quick glance around. About halfway up the very grand staircase, which splits in two, there is a little landing, and in it, a little door! This had to be it. Naturally, I didn’t feel I could go up and have a peek inside, so I satisfied myself with taking a picture and then leaving slightly hastily. 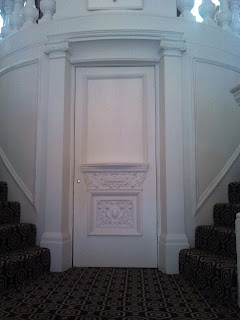