Polpo Smithfield had its soft launch last week if the number of people inside as we walked by was anything to go by, but it officially opened yesterday, and to kick things off they were offering a 50% discount on the total bill. Drinks included! This was too generous an offer to pass up considering I had been wanting to try one of the branches in the Polpo kingdom for some time.

I think Russell Norman was probably at the vanguard of creating these stripped back, shabby-industrial areas for eating, and he has done it again in Polpo Smithfield. We arrived at about 5:45 and were immediately seated at the window table, all of us commenting on how impressed we were with the décor and ambience. I love a place that lets you eat at the bar, yank-stylee. Within 20 minutes the rest of the restaurant had filled and there were people waiting at the bar, or outside with drinks, and we were feeling very pleased with ourselves.

Thanks to the discount, and there being three of us, we were able to sample quite a few of the dishes, choosing three each but sharing most of them, and also getting dessert. Instead of listing them all here, I’ll just dive straight in to what we thought of them. 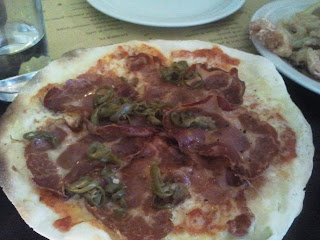 The favourite dish of the evening was unanimously the cured pork shoulder with pickled peppers pizzetta (above). That truly was delicious. But then, when you think that for a pound less, you can get a huge pizza from Franco Manca, you appreciate it a little less.

I also really enjoyed the rabbit, chicory and radicchio salad – it had shaved radish and thinly sliced red onion and the dressing was fresh and pleasantly tart. It was like having a chicken salad but leveled up. I could easily eat that again. I thought the arancini were pretty good too – nice and crunchy on the outside, a pleasant surprise of some creamy mozzarella (I’m guessing) in the middle, and very herby – thyme and oregano I think. But it needed something to dip it in, some aioli would have gone down a treat. I think the same can be said of the fritto misto (squid, prawns and octopus) – Stephen kept dipping his into the meatball sauce, which suggests it needed something to give it some moisture.

The steak flank with truffle cream, which sounded the most luxurious of all the dishes, was in fact a bit dry and boring. (Not a patch on the one I had on Friday at Flat Iron.) I didn’t really partake in either of the seafood dishes enough to judge them thoroughly. The one prawn I had was nice, and the potato and celery I had from the octopus salad was also fine. But the fact that the guys didn’t feel the meal was outstanding probably shows that I wasn’t missing too much by not eating them. 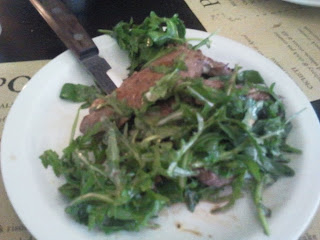 Of all the various things you can do with meat, making them into meatballs is my least favourite, second only to meatloaf. However, Polpo’s pork and fennel meatballs were on Time Out’s 100 best dishes so I thought ‘when in Rome’ and ordered them. Stephen ordered the veal and porcini versions. They both came slathered in the same tomatoey sauce which Stephen and Ifran thought was underwhelming but which I quite liked. And my veridict on one the 100 Best Dishes in London? Well, I guess for meatballs they were nice, but they didn’t wow me or convert me to a meatball lover. But what do I know? I don’t really like the form. The guys, however, who do, much preferred the veal and porcini, which they seemed to really like.

The cotechino sausage with borlotti beans tasted it good but I thought the texture was too mushy. This didn’t bother the others who gave it the thumbs up though.

And after all that we managed to squeeze in dessert. I had the tiramisu pot, which I loved. I love Tiramisu anyway, but this was a really good version. The guys shared (aww, sweet) a strawberry and pistachio cake, and a couple of cannoli with strawberries. I didn’t try either of these, but when I asked Stephen how the cake was, he said I wasn’t missing much.

So, a bit of a mixed bag then for Polpo. Maybe if I hadn’t already been to Salt Yard last year I would have loved it. As it was, it didn’t quite live up to my expectations, though my expectations were extremely high, given all the hype. With the discount applied (and tip only added on to the final discount amount) I was happy with the meal. (It came to £20 a head.) If I’d been paying full price, I think I would have been more irked with what we got.

I may not go back for the food, but they have a Negroni bar downstairs, which we didn't visit, and I'd rather like to give that a shot. 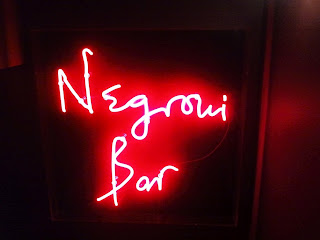