The Shacklewell Arms was revamped and taken over by the people who run The Lock Tavern in Camden (also on my List) and regularly holds nights in association with Eat your own Ears or Bugged Out! which is how I came to hear of it. I always thought of it as a live music venue (even though I hadn’t yet been) rather than a pub, but I was mistaken. It is equally both and does both equally well.

But first, we ate. Just down the road, practically opposite the Dalston Junction station is StreetFeast, another outdoor arena for the hottest food stalls to congregate and tempt you. I had been craving a Big Apple Hot Dog for a few weeks now, so that was my reason for going but once there, the variety on offer did much to tempt me away. I decided to try a stall I hadn’t yet tasted and got some pani puri from Horn OK Please. Unfortunately, they didn’t live up to expectation. They are little pastry shells filled with potato and lentils and a salsa verde. I asked for spicy but they weren’t at all, and they were also rather unpleasantly cold. Stephen had some ribs from the Rib Man, when normally we go for the Rib roll. He was also disappointed and not as full as he expected to be. What could we do but get a hot dog anyway! Normally when I get one from Big Apple I get the beef frank at about £3.50. So I ordered the Big Frank. It was £5 and it was massive! I ate it all because it was sooo good, but I really did not need that much meat in my stomach. StreetFeast is there every Friday and has different vendors every week. I often go to Eat Street and there is definitely some crossover, but with the addition of a bar and being in the middle of Dalston, Street Feast feels very different – much buzzier than a lunchtime crowd. There’s also a marquee so that you can actually sit down and eat. “Waitresses” take your order, alert the stall in question, and then take it over to you when it’s ready. Very handy if it’s raining, which it seems to be, constantly, this summer. Unfortunately, we weren’t in this seated area, so as soon as we’d eaten, we were off!

We walked up Kingsland Road and up Shacklewell Lane. And just as I was beginning to wonder how much farther it was, and whether this was about to turn into a dodgy area in which we had no business being, I saw what looked like the building from the photos. It was strangely quiet considering there was supposed to be a band on, and from the outside it wasn’t much to look at at all. We tried the nearest door to no avail. We then heard a “Hullo, over here!” type noise and turned to see the two bouncers beckoning us over to show us the way in. I really don’t think I’ve ever come across a nicer pair of door security staff. Yes, they checked our bags, and even frisked Stephen (which worried me a little – do they get many clientele who actually need to be frisked?) but they did so very courteously. One of them, obviously being a bit of a detective, slyly deduced we had not been before (I think going to the wrong entrance may have tipped him off) and when we confirmed, opened up the door and gave us a ‘tour’ directing us to ‘the back’ for the outdoor beer garden and ‘the back’ for the Dance Hall. We then went inside. It became pretty obvious once we were in that we would have managed to find both the beer garden and the Dance Hall without any hints as the actual pub is quite small and there is nowhere else to go but ‘the back’. They also have put up helpful signs directing you to each area of the building, and back again to the front. Lost people wandering around aimlessly is clearly a concern of theirs. 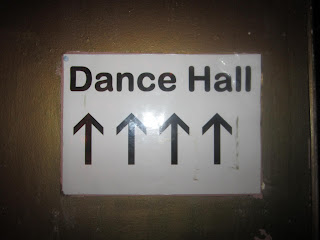 I was delighted by the pub itself; it had a warm and intimate ambience, and also, a pool table, which pleased Stephen. If we lived closer, this would definitely become a regular haunt for drinks. They have Frank’s hot dogs in residence at the moment but as we’d already just had one from Big Apple, we didn’t sample. I’ll have to go back to compare though. We had a wander around and a peek in the Dance Hall which is where the live music takes place. Nothing was happening yet, and it was too  wet to go outside into the garden so we propped ourselves up at the bar and had a drink. Mine was a large wine, and I was even charmed by the wine goblet I was given and how it was filled absolutely to the brim.

The pub bit was busy but not crowded – all the seats were taken but there was space at the bar and you weren’t constantly jostled as you stood there. This is probably because the Arms is so far off the beaten track that it is unlikely to get passing trade – the people there have made the effort to be there. And that effort is well rewarded.

On our side of the bar there was a door that opened into the Dance Hall so we knew as soon as the band started. We wandered in and enjoyed the support act (I didn’t catch their name) who were pleasant enough. This back room is great for a live act venue, although the stage is tiny. Any more than four of you in the ensemble and extras have to be relegated to being at the back of the group, hidden in an alcove. God knows what a band would do if they had a drum set. The rest of the band would probably have to perform from among the audience. I don’t know what the capacity for this part of The Shacklwell Arms is but, for the types of acts they tend to have – lesser known/upcoming or unsigned, it seems perfect. With only a smattering of people lining the walls it doesn’t feel too empty, but if you have an act that’s a real crowdpuller, there’s plenty of room for people and plenty of room for dancing around as well (as witnessed on Friday). Gorgeous George themselves were quite fun. They have a very current sound – a bit vintage in style and an act I can imagine playing at something like White Mischief with trombone and fiddle. If I was at a festival and I was drunk and Gorgeous George were playing, I’d pass by and probably have a bit of a dosey-do to their gypsy swing. But I wouldn’t go to said imaginary festival in order to seek Gorgeous George out. They clearly have a bit of a following though so I’m sure they won’t notice my absence.

The gig on Friday was free and they have a lot of free nights there, as well as better known acts that require paid entry (normally entrance is under a tenner). The gig on Friday finished before 11 but then they had a DJ playing and the Shacklewell itself stays open until 3 am. Now that I know I like it, I will definitely keep an eye out for more reasons to head back, or if I’m going to something in the area, it will be worth going slightly out of my way to pop in for a drink on my way or way back.