Having reasonably recently been to Red Dog Saloon, going to Duke’s Brew and Que was inevitably going to invite comparison. And yes, they are broadly similar, but there are some important differences. They’re both in trendy areas (Red Dog is in Hoxton, Duke’s is in Haggerston) but Haggerston is decidedly more down-at-heel than Hoxton and consequently Duke’s had a higher hipster to normo ratio than Red Dog. In fact, I think my party were the only normos in there, with the girl in the shiny lycra pants and neon trainers lifted straight out of an 80s aerobics video, and the superhairy Serge from Kasabian lookalike at the next table only marginally standing out from the rest. That was inside, anyway. On the tables outside some men of the older generation were happily supping pints and braving the unpredictable weather.

Duke’s is a lot more stripped back than Red Dog, the vibe a bit more laid back. It has various sizes of wooden tables and benches/seats, a small bar in the corner and few decorations save, for some reason, a pram at the back with a doll sporting a Jedward hairstyle. It feels more Wild West than Red Dog even though it doesn’t have ‘Saloon’ in its title, especially when you go to the toilet and wash your hands in the metal tub with a foot pump.

To go with the bare vibes, the menu is also pretty pared back. There are no starters and only a handful of mains, plus one special written on paper with marker (fried chicken. For some reason I suspect it is always fried chicken. And what’s wrong with a chalk board? It’s easier to see and surely more environmentally friendly?). There are no American-style challenges here, like the naga viper chilli hot wing challenge. In fact, there are no hot wings at all. Or starters. Or variations of burger. That didn’t matter. Almost everyone went for the same thing - pork ribs, with Stephen going for the beef ones so we could see what they were like, and his friend ordering a burger. Ribs come with a half pickle, some coleslaw and pickled onions (I love pickled onions!) but we ordered some sides as well. We got some beans with burnt ends, some friend pickles and okra, some seasoned fries and some mac ‘n’ cheese.

The sides weren’t amazing – I think there could have been more meat in the beans and the mac n cheese, while very gooey and cheesy could have done with a bit of a crust on the top I think. Stephen wasn’t too fussed with the fried pickles and okra but I thought they were quite pleasant and light even though they were fried. The only thing was I think they were supposed to come with some chipotle mayo but we didn’t get any. I didn’t mention it though, as I was happy to dip them in BBQ sauce. 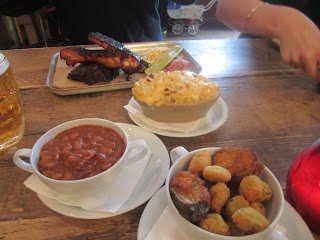 And so, on to the main event. The ribs at Duke’s are as different as ribs can be from those at RD. They came stacked, a bit like a meat jenga and lookswise, they were the business. Tastewise they did the same. There was a lovely smokey flavour throughout, a bit of a char on the edges, and the marinade coating them had formed a lovely sweet, sticky tar but also had a bit of a kick to it once you’d had a few bites. This goes for the beef ribs as well, meaning that they had achieved what I thought the beef ribs at Red Dog lacked – the essence of barbeque. Their texture was also quite different from the Red Dog ribs. While some were soft enough to slide easily off the bone in one go, you did still have to put in some effort to tear the meat with your teeth to get bite sized chunks; the meat didn’t fall off into your mouth at the slightest touch. To be honest, I sort of wished they did so in that respect Red Dog was superior. The general consensus at the table was that the pork ribs were the better rib but I preferred the beef ones! The friend who had the burger said it was a decent burger, nothing to write home about. He does, however, say that about every burger. In this case his only real criticism was that the patty was a bit crumbly.

Unfortunately no one went for the sliders but I saw them being taken to another table and they looked fabulous – the brioche was so shiny they looked like little meat candies perfect for popping in your mouth. I’d like to try them, although they looked so dainty I don’t know if three would be enough. Another good thing about Duke’s was that the portion sizes were very sensible. You get four pork ribs or three beef. After polishing off two pork ribs and half a beef one I was most definitely full but knew I had enough room to try a dessert. 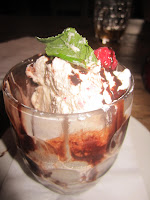 These were also written on the paper roll. When we arrived the choices were sweet potato pie, cheesecake and bread and butter pudding which all sounded exciting. While we were there though, the roll was moved on and new desserts written which rather disappointed the cheesecake fans – the choice was now Hackney mess, brownie, or bread and butter pudding. The Hackney mess apparently changes every night and our waitress wasn’t sure what was in it, but I quite like a surprise so I ordered it anyway to share. As did the other couple. Even though it didn’t have any meringue in it, it was definitely the sort of mess I appreciate. Not being a fan of berries, I was very happy that this one had made only the slightest gesture to Eton mess and its usual berry swirl. There was a raspberry on the top and the occasional dot of it throughout – not enough for me to really notice the horrible pips that I’m so against. Instead there were chocolate chips! So it was more or less an ice cream sundae – cream, ice cream, chocolate chips and chocolate sauce – but that was fine by me. The same black sheep who had gone rogue and ordered a burger, ordered the chocolate brownie, but I was too far away to sneak a taste. It came with cream and ice cream and looked pretty good though.

So, Duke’s has its merits and I am sure I will be back, not least because their brunch looks fantastic. A word of warning though: book ahead because a) it's a novelty these days for a restaurant to let you reserve but most importantly b) it gets crazy busy. We only got in because there was a cancellation and they were getting plenty of calls and walk-ins that they had to turn away. The downside to being able to book is that they only give you a slot of an hour and a half. Personally, I think this is a small price to pay for not having to wait for upwards of an hour for a table. We finished our meal within that time without being rushed, and while we may have hung around and had a few more drinks normally, it was no hardship to repair to a local pub.