Whirl-y-gig, being very much of the Planet Angel style of raving, was therefore, of course, an incredibly fun and friendly night. Borne out of a dancing self-expression event for the Association of Humanistic Pscyhology, they outgrew them and now host an almost monthly clubnight in London and their own festival Whirl-y-fayre. It has a bit of a festival feel to it – like Wonderland – lots of decoration and colours everywhere. They try to keep the music eclectic but dancey. This didn’t work for me quite so well as it meant they chopped and changed styles, so you didn’t know if you would like what was playing one song to the next. And the sound levels in the Camden Centre, I felt, were woefully low. You could easily have a conversation at the back of the dance floor, which is not what I want from my raves.

However, I had a brilliant time. When the music I liked was played, it was great, and I have to say it did veer towards my style of thing as the night wore on. Everyone seemed so up for it and so happy to mingle and chat to people they didn’t know. I lost track of the number of people I befriended. They have interesting bits and pieces around - such as a board to stick messages on (someone wrote something very kind about me!) which makes the night feel a little more interactive and encourages getting to know people. I came away from the night with a huge smile on my face. 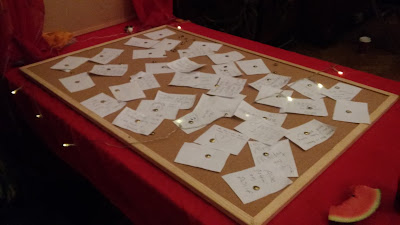 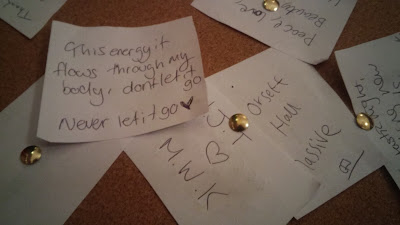 They finish each night with a parachute – you know, like when you were at school. This does feel a bit random as you all just sit underneath it and natter to yourselves, but the visuals are really quite cool!

One other small niggle would be that it ends at 4 am which is, of course, far too early. But there are always afterparties…
Posted by Ginglesnuff at 12:09 PM