KaraUke was a little shambolic but I think that’s part of its charm. No formal screens with the words lighting up as you go for KaraUke. Not even printed sheets of paper to sing along with a la Hip Hop Karaoke or Reggaeoke. No, you can hold an iPad and sing along to that, while the words are put up on a screen behind you so the audience can sing along, but the entire song is displayed at once which makes the words rather difficult to see.

I was also surprised that the ukulele band was in fact a proper band – not only were there several uke players but there was a bass guitar and a drum set. I was a little disappointed at first as it wasn’t quite as quaint as I was expecting but it was pretty cool to have a full band supporting you and made for a rounder sound. 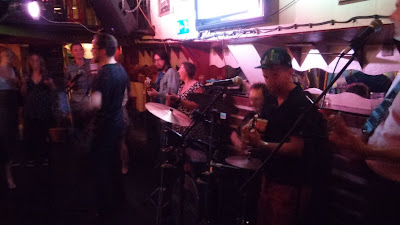 They hold karaoke on the Tamesis Dock which has to be one of the quirkier pubs/venues around – a permanently moored boat decorated in a lively manner. In fact, I was chatting to a friend of the band and she said none of them live anywhere near it but they love it too much to switch to a different venue. The karaoke is held in the belly of the boat which made for a slightly stifling evening but it didn’t seem to mar people’s enjoyment.

There are no prizes but every performer gets a badge.There’s clearly a few regulars as jokes were made about the number of badges ‘Pete’ had accumulated and whether he could make it through the entire song menu in a year. That would be quite a feat but not as daunting as you might think as it’s limited to about 50 songs. There are a few classics and also songs they clearly just like (Tenacious D has two songs on there which you don’t find in most karaoke songbooks). The opening singer for tonight delved right in with one of these actually – Fuck her gently. In fact, thinking about it, there was quite a lot of swearing in the evening. That one... I did Creep... and another girl did Fuck you by Ceelo. It’s that kind of crowd.

They do two sets which have 9 singers each and while they’re not short on volunteers this seems about right and a few people were even able to sing twice. Quality was… variable… but  your own backing singer is there to help anyone out and carry the tune if it ever falls off a cliff. Everyone is encouraged to sing along and many people were dancing around too. 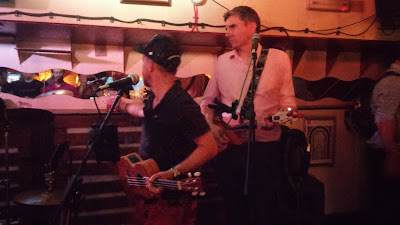 And all this for FREE!! Of course, they do very much appreciate donations and dedicate a bit of time sending round the ‘begging bowl’ as they do have rehearsal space and expenses and tings to deal with. Any monies they receive are well deserved.
Posted by Ginglesnuff at 11:30 AM