Let it never be said that Carolyn and I do not know how to bar hop. For we most certainly do.

As with other parts of the city, Dalston/Stoke Newington is ever changing with bars closing and opening all the time. We knew there was a bit of a backlog of new places to explore and so, one Friday, we set off to conquer them.

The main aim was to try out Silk Stockings, the newest bar from those behind Satan’s Whiskers, and to hopefully try out Haunt and La Cabina as well. Both achieved. And more than we expected in between.

The fact it was a cold January night worked in our favour to begin with – we had made no reservations but were able to slip into a space for two at Silk Stockings with no trouble. On another night I dare say there would have been a wait as the place was pretty full anyway. For our first cocktails of the night we had a blood orange margarita for me, and an airmail for Carolyn. Perfectly tasty, and the bar was a very welcome offshoot of Satan’s – could have happily whiled away the whole night in there, listening to their similar soundtrack of old school hip hop. 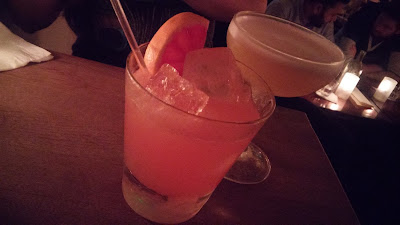 But instead on we forged, popping into the newly expanded Ruby’s to see what the Lounge area was all about. This had a fun, relaxed vibe but we were a little put out by the fact they stop doing their cocktails at 10:30. Isn’t part of the reason you go to Ruby’s their cocktails? I was upset I couldn’t get my hands on a chilli apple martini. Also, this was the first of many times we realized January was now working against us. We could see the potential but it could have done with double the number of people in there. 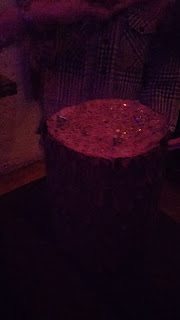 The same could be said and more for Hammerschlagen which we stumbled into next. This bar is centred around the Scandinavian drinking game of Hammerschlagen which the only 4 punters in the place were playing. You hit a nail with a hammer (or not) and it is supposed to lead to one of you drinking. We weren’t sure how this worked exactly and neither did those playing it but it didn’t seem to stop them having fun. One drink in here and we were off.

To Victory Mansion, another unscheduled stop on the way. It was time to cocktail it up again but if you think I can remember what we were drinking by this point, or indeed much about the bar you are mistaken. I remember I liked it but that’s as far as it goes.

For some reason Haunt sticks out more in my head, possibly because as we approached the door, we were pretty much dragged in and shoved downstairs by a very merry guest. We went down and had a little dance. Again, very empty but I would venture back again to see if it improves once people had got over their January blues.

Our final stop was the reincarnation of Manero’s, now known as La Cabina and sporting a ‘secret’ entrance in a phone box. Except that at this time of the night the door is just open anyway and rather ruins the mystique. And lo! THIS is where everyone was! It’s funny what a rebrand and a bit of PR can do – both Carolyn and I had been to Manero’s before and it was nowhere near as busy. But La Cabina was heaving! It didn’t feel too different to before, but had less of the house party vibe it had before, and more of the feeling of a proper bar. Which I kinda think is a shame, but it’s always good to have a bar that stays open late and attracts customers so it gets a thumbs up. We had one cocktail between us (which I have to admit I don’t recall being particularly spectacular) but that’s not really the point. Let’s hope it keeps bringing the revelers in.
Posted by Ginglesnuff at 10:24 AM