I do love it when a Time Out offer comes along and coincides with a place I’ve had on my List anyway. And thus I got to try out Chop Shop on Haymarket for the princely sum of £25 for three courses and a cocktail. And trust me, with the food they are serving, this was a hell of a steal.

I booked for 7 pm which happened to be happy hour so we started with a cocktail that was not included in the set menu for half price. I had the creamy Rosemary’s baby – a cocktail subtley laced with rosemary and bulked with ‘custard’. A creamily good start although I would ordinarily order something like this later in the night.

However, it did work very well with the smooth and creamy artichoke and truffle mousse I ordered to start. It came with lightly toasted sourdough, and for once I felt there was enough bread to go with the mousse, without ending up with loads to eat on its own. I have had artichoke veloute before and thought it was wonderful. This was similarly so, with heady truffle making it feel very special indeed. 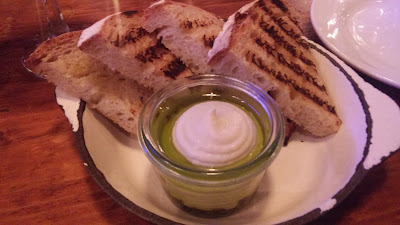 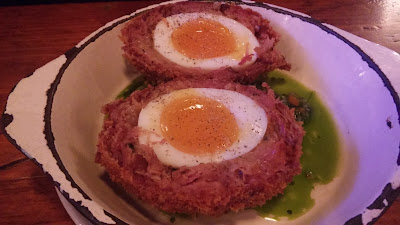 We both ordered the steak for our mains and made sure to order different sides and sauces. The choice on offer was impressive – rosemary fries, creamed spinach, mashed potato, cheesy leeks. Finally we settled on fries and leeks, and we ordered béarnaise and red wine bone marrow sauce to accompany it.

Those leeks – oh my! They came in a thick, almost béchamel sauce into which their oniony flavour had seeped and on top was a layer of grilled cheese. 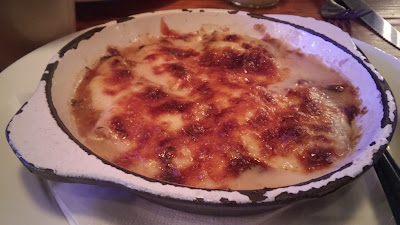 I could wax just as lyrical about the bone marrow sauce which had a deep, glorious flavour and I gladly sloshed it all over my meat which was cooked to a perfect medium rare as requested and had a slight char about it which was very pleasant.

The béarnaise was had a lemon tinge we both appreciated and the chips were perfectly crunchy and seasoned. This was a faultless meal so far.

The desserts, in my mind, did not quite live up to this. They were both very heavy and felt a little ordinary compared to what we’d had before. I dived into the brownie sundae first and then tried the butterscotch pudding which I thought was bland. But it was just more delicate compared to the chocolate and in the end I much preferred it and ended up eating quite a bit more of it than I had intended given how full I was. 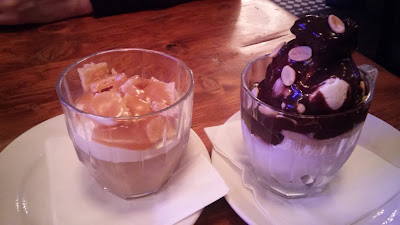 Service was perfect throughout – attentive and friendly but not cloying. We left with a very high estimation of Chop Shop indeed.