Trade is, I think, a bit of a local’s secret. I was meeting a friend for brunch (my breakast as I had only just got up, his lunch) and had planned to go to Hotbox but just thought I’d check out the menu for Trade and suddenly thought I wanted to try that instead. When I arrived I walked right in and was just behind two other people. There wasn’t really a queue. Two minutes later and one practically stretched out the door!

It was a balmy day so we sat outside. Eventually I made my decision – avocado on toast with chorizo on the side. My friend had the reuben because they are not that ubiquitous over here.

When they arrived I had total food envy. His sandwich was huge! My dish looked paltry! But Trade knew what they were doing. Mine was more than adequate for a breakfast (as indeed mine was, even though it was 1 pm) and it meant I had room to try one of their delicious baked goods at the front. 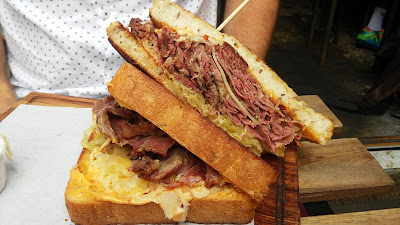 It also tasted great. The avocado was mixed with feta which gave it a very pleasant tang and the chorizo was a fine example of what is almost always a sublime sausage. My only quibble would be that the toast should have been given more of a grilling as I wish it had been more crisp. This picture makes it look better than it was. 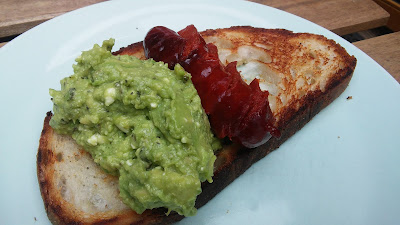 My friend really loved his sandwich, and a bite from me confirmed it was a spot on reuben.

I am keen to make this a regular haunt!