Just when I thought I was about to have visited every new place under the arches in Bethnal Green, another place opens up. That would be Paradise Garage, from the people behind The Dairy in Clapham and it is too expensive for me to be heading down there soon. So, I was at the other place with Paradise in its name – Resident. On a Tuesday evening it had a few people having a bite but wasn’t by any means busy. I think it deserves to be.

As it was my first time here I wanted to try a few things so we got a few dishes from the small plates selection. All of which sounded delicious but it was the fresh pea arancini with habanero sauce I had been fantasizing about all day so I had to have that. Our waiter told us it was a very good choice. Added to this I ordered the chorizo with rosemary pinto beans and we also got padron peppers, maris piper chips and a pork spring roll.

My date for the night proclaimed that arancini was in his top two favourite foods (along with mac and cheese) and so if anyone could judge whether these were on the money it was him. He declared they were great – very light and fluffy (but with a good crispy coating). I had expected the pea to be incorporated throughout rather than the actual odd pea here and there so was a little disappointed but they were tasty. The habanero sauce was in no way as fiery as I thought it would be but the habanero was discernible and we preferred dipping our chips in this to the ketchup we’d asked for. And the chips by the way were excellent. 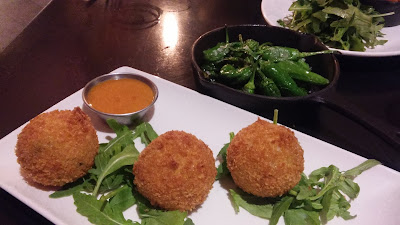 I hadn’t expected the chorizo dish to turn up the way it did but I cut it up and spooned it up with the beans. You can never go wrong with chorizo (or if you do someone is a very bad cook) so this was predictably delicious. 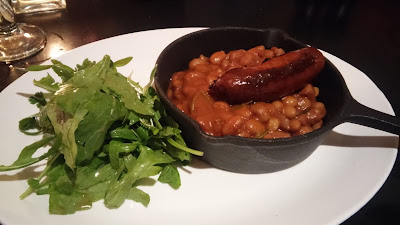 Most impressive I think was the spring roll which contained actual chunks of pork and came with a really tasty soy-based dipping sauce. I would get this for myself another time. 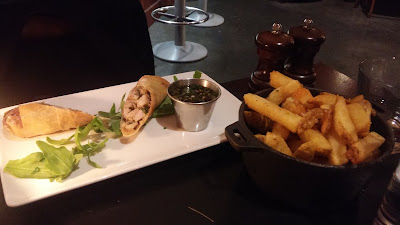 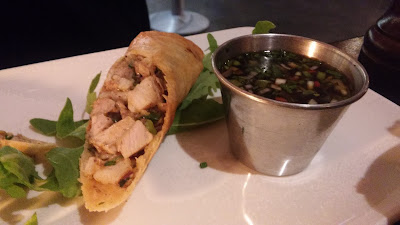 House cocktails are only £6 but be warned that even though they do have a beer on tap, they still only give you a bottle-sized serving!

This is a great, laid back bar/restaurant that is perfect for stopping in for a few dishes to line your stomach for any drinking along Paradise Row later.

Posted by Ginglesnuff at 9:52 AM