That Natural Philosopher is a charming, ramshackle little cocktail bar that I liked very much. It’s just a shame no one else seems to. Or perhaps they just don’t know about it. Even though it isn’t hiding itself you could probably walk past it and not quite realise it was there. It looks humble. Inside it is split into three levels with the bottom one being nothing more than a cubby hole where you and a small group of friends could hide away. It’s done by the same people who ran Manero’s (now closed) and it’s just as cool with the same kind of ‘being in someone’s house’ vibe. But as there was only me, my friend and two other people in there when we went at 10pm on a Friday night, it rather lacked atmosphere. A girl and her mum turned up when we were halfway through our drinks but I would hesitate to guess that was it for the night. 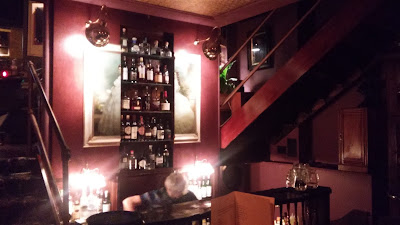 It doesn’t help that it’s not near the other bars on Hackney Road – I expected it to be near Mr Buckley’s but it’s very much the Cambridge Heath end. Our cocktails were very nice and the sausage roll menu sounded delicious but we moved onto other pastures after just the one drink. That one drink being the Zabarella, a cardamom-infused tequila with lime juice, vanilla sugar syrup and pomegranate. An interesting blend – I don’t usually like cardamom that much but this was really nicely balanced. My friend had the special (I can't remember what it was called) which came with an ice lolly to dunk into the cocktail! 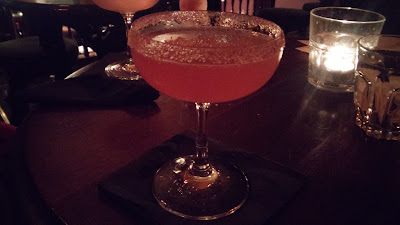 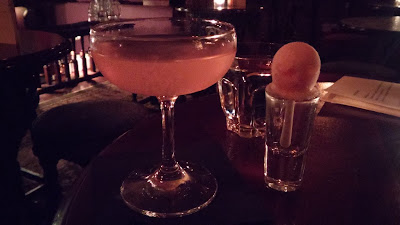 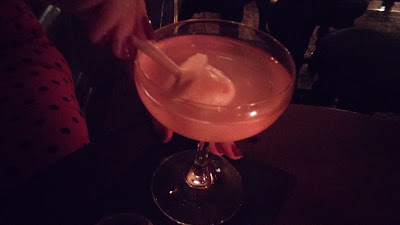 And I appreciated that the menu was short enough not to cause total choice paralysis, even though every cocktail sounded intriguing. 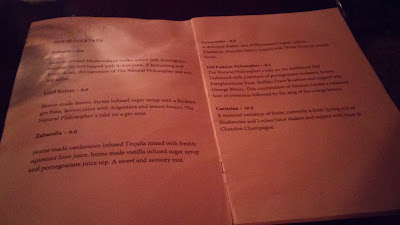 Posted by Ginglesnuff at 1:22 PM