Even though I went on the very last night of this pop-up I thought it was worth writing about as they have promised to return in September with a permanent place. So, for an idea of what to expect when that opens, read on…

Their pop-up place was in the venue formerly known as Factory 7 where I once went to an absolutely ace rave hosted by Krankbrother. But I digress. You go in and either pay for entry or confirm your tickets. They will then give you your starting time and you are free to go in and make use of the bar area, which in this case overlooked the ‘course’. It was set up a bit like a chalet and was a nice enough bar to hang out in even without playing golf. 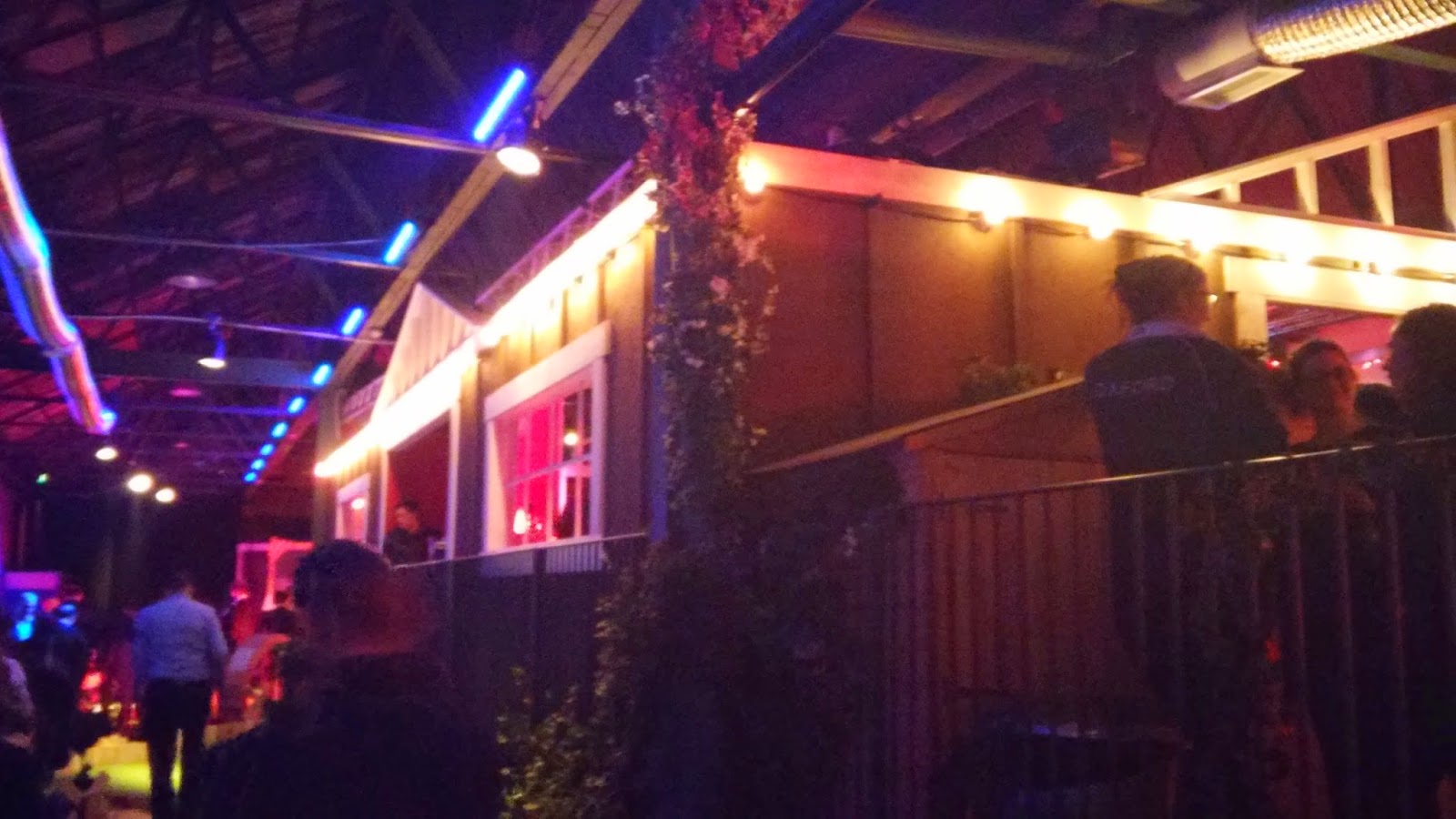 They had two choices of street food available – when we went it was Pizza Pilgrims and Butchies, both of which I’ve had before. I didn’t really like Pizza Pilgrims when I had them ages ago but must admit their pizzas do look good. I had Butchies again, which was just as good as the first time. I do love fried chicken in a bun and it’s so nice to see it being pimped up the way burgers have always traditionally been. 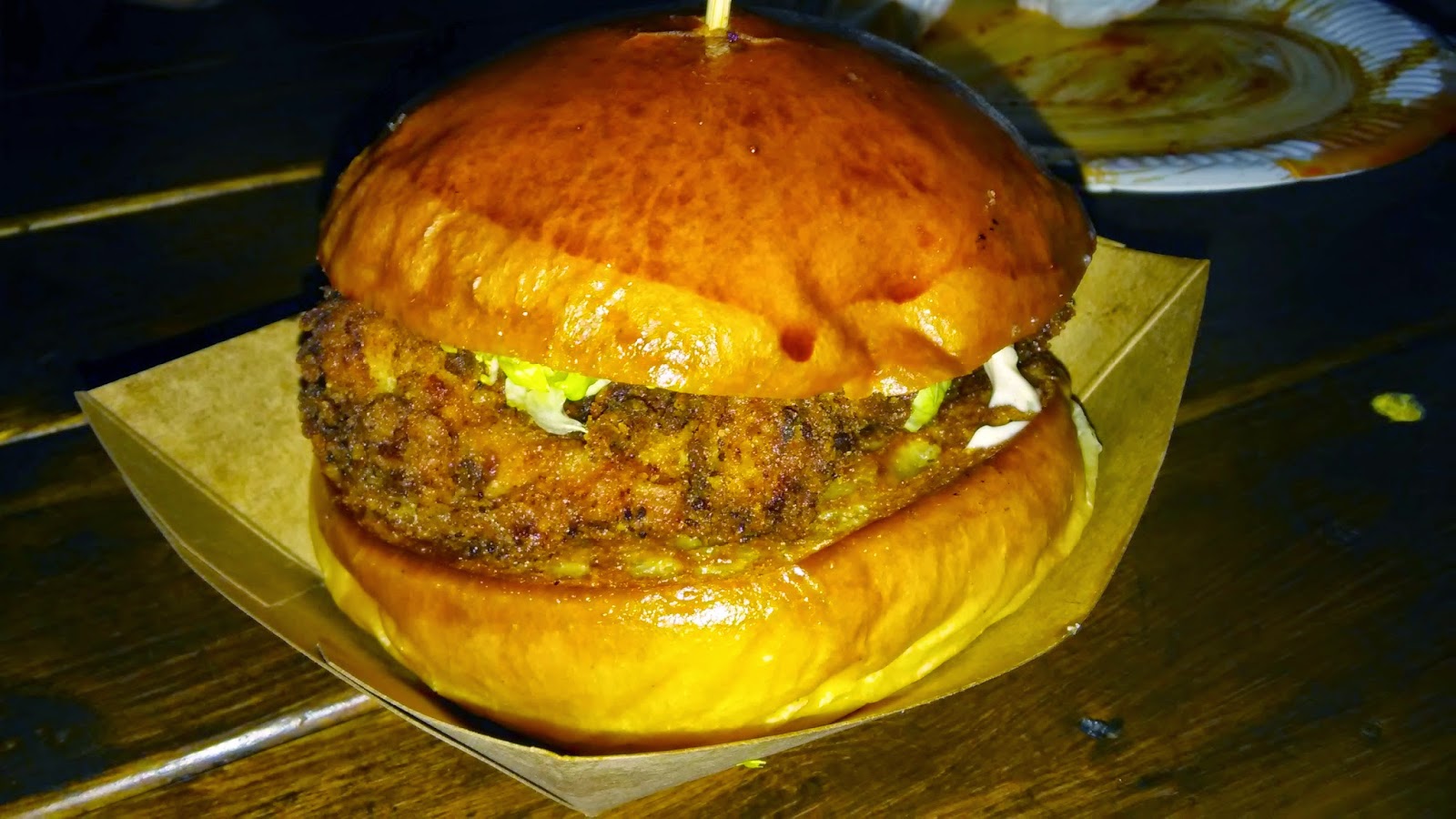 At our allotted time we walked over to tee off and get our scorecard, balls and clubs. There’s maybe 5 or ten minutes between each group but the whole course is so tiny that you’re effectively forever in a queue. However, it means you get to watch the people in front of you play and you quite easily and quickly become very friendly with the people in front and behind and it just feels like you’re all playing together. I really liked this and 9 holes is just the right amount of time for it not to feel like play is taking forever. 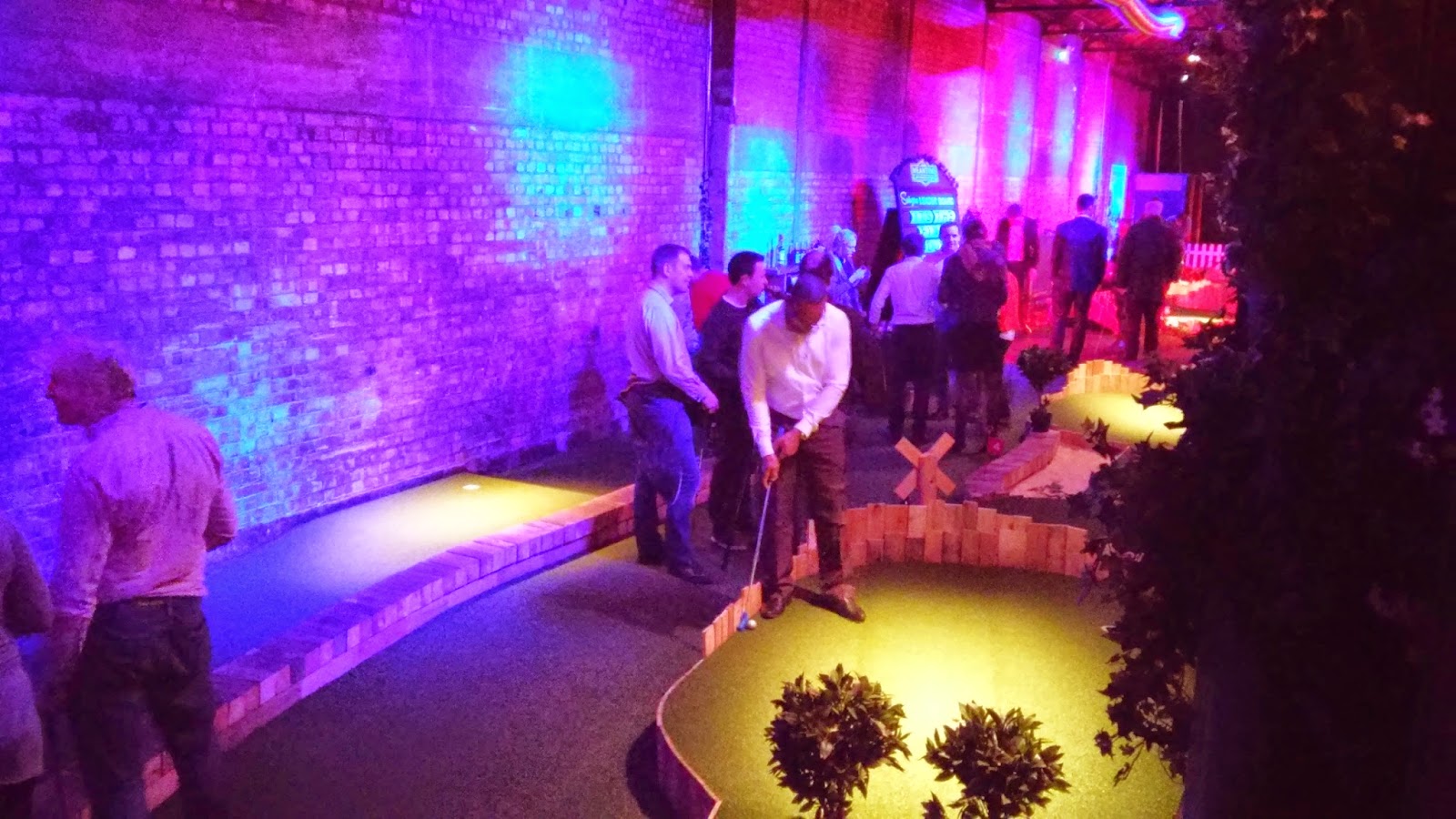 I am already a pretty big fan of minigolf so they were kind of preaching to the converted, but I think, fiven the limited space, they did a really good job of creating a fun course with each hole different enough to the others. There was a ‘sandpit’ feature, a water feature and some areas you could consider the ‘rough’. Most holes were par 3 and you were supposed to have 6 strokes max before cutting your losses in order to keep play moving. Most of the time we didn’t need this but occasionally one was just darn tricky and we had to take the full 6 – sneaky slopes and hidden holes sometimes got the better of us! Both me and Stephen were way over par in the end but what mattered was who won out of the two of us and I’m happy to say it was me! 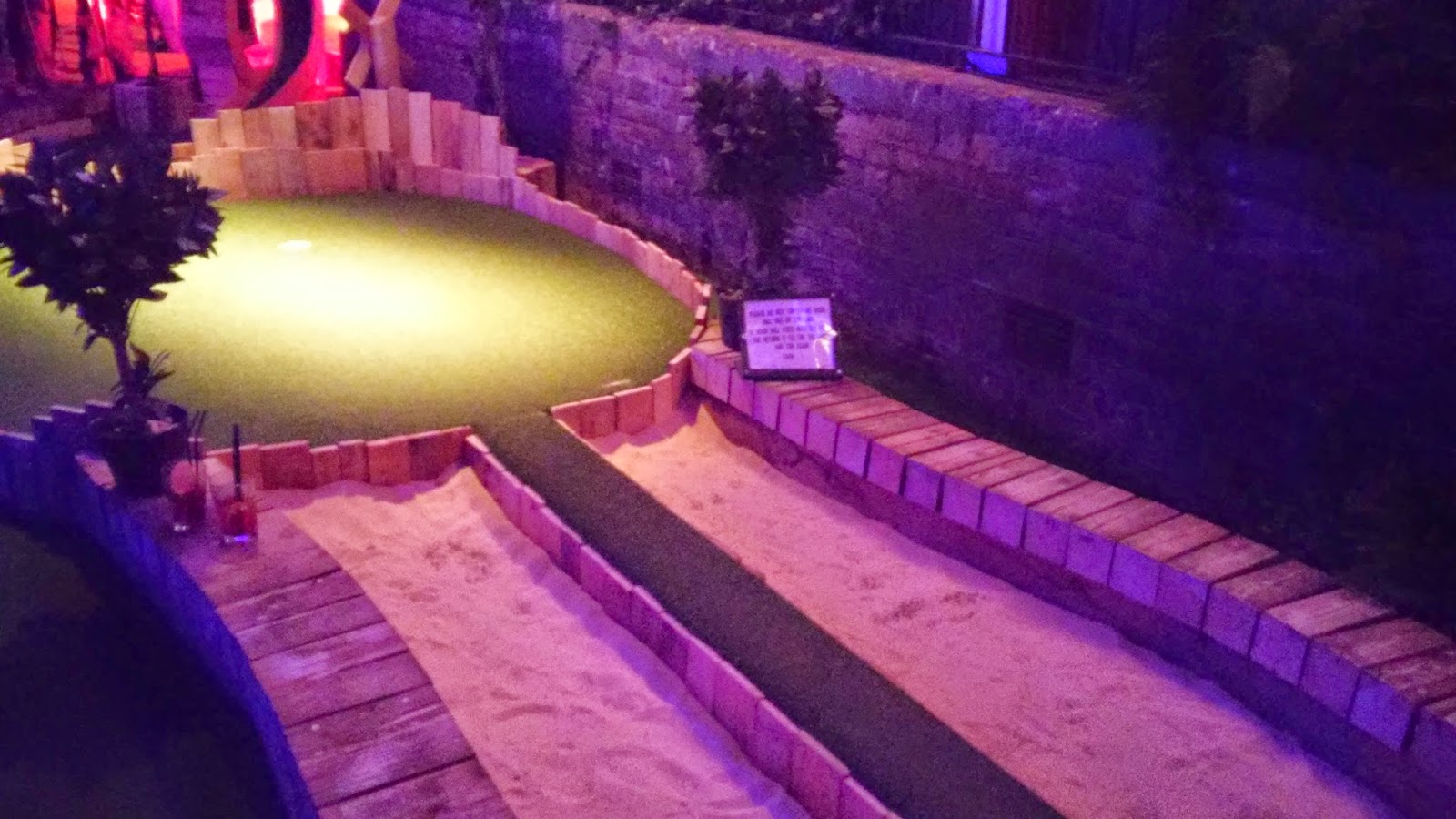 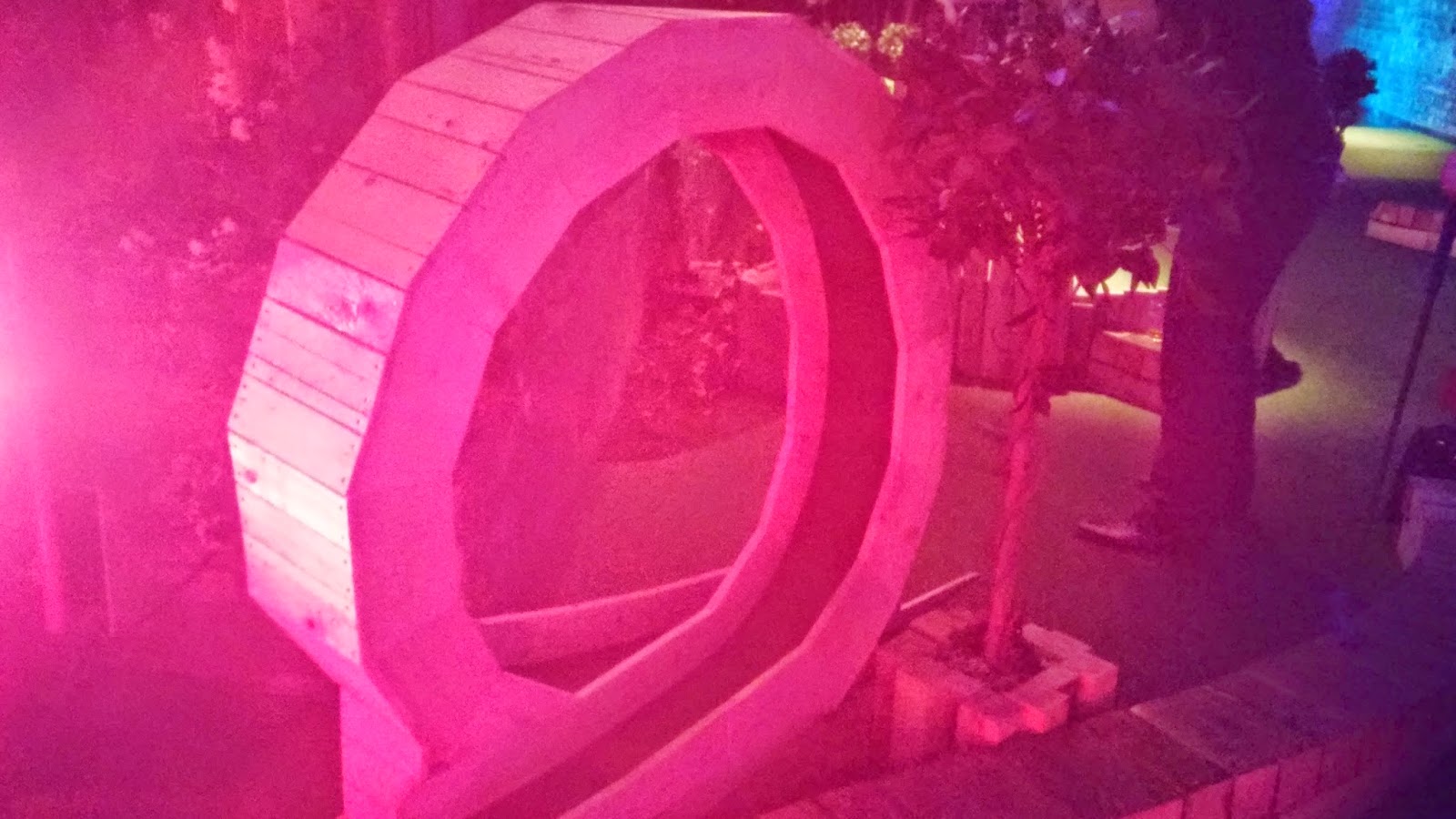 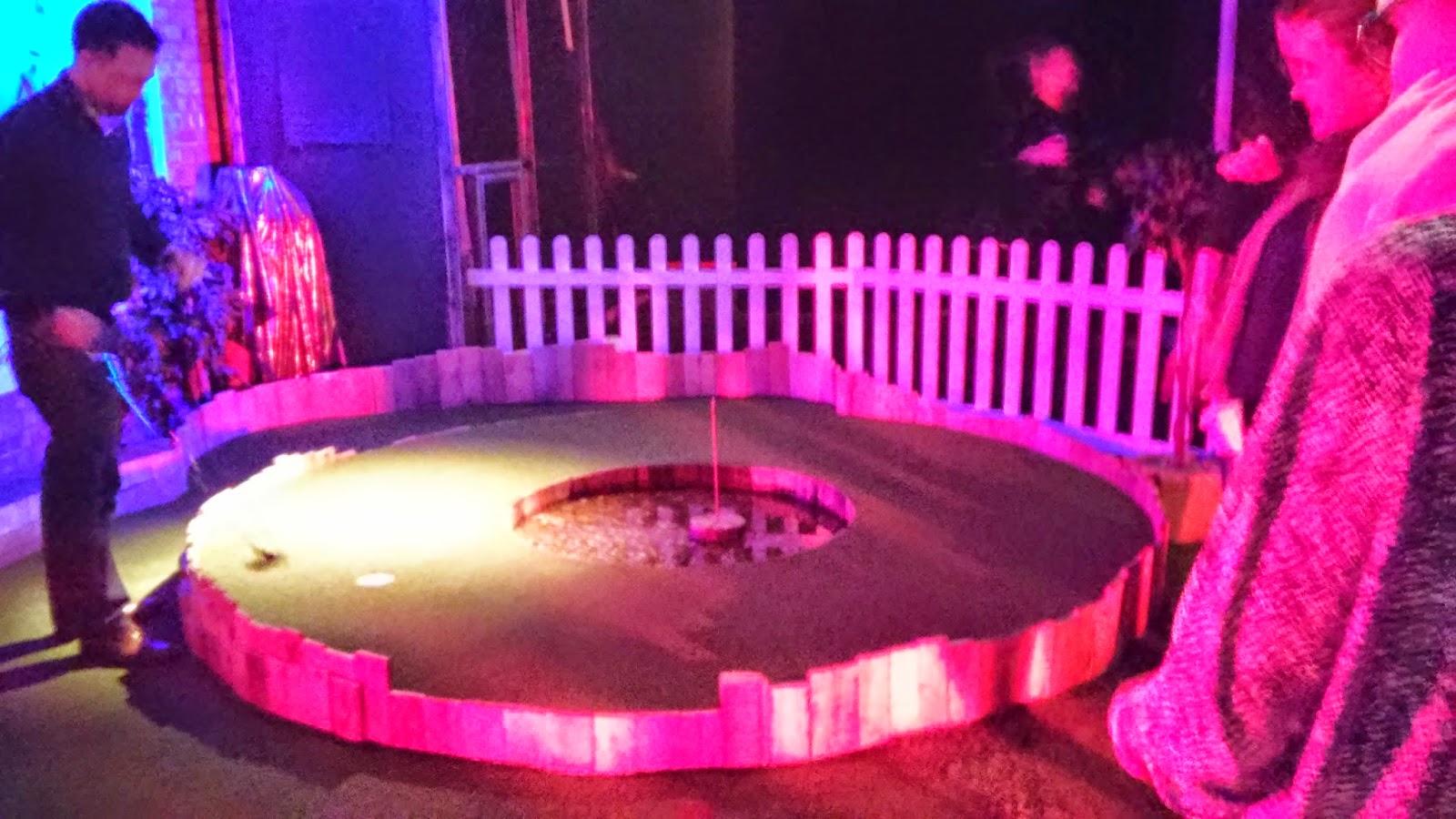 So I really enjoyed my City putting and will happily go back to their permanent home in the autumn. But probably without making use of their bar. Me and their pricing policies just did not get on…

One of my pet hates is feeling taken advantage of at a bar. It happened at Little Yellow Door when they automatically included service charge and I felt similarly at Swingers. While beer prices seemed in line with other bars in the area, the wine was really expensive! I asked for a medium white wine and was given a thimbleful – I said it seemed a little small and he topped it up to the ‘large’ size and then charged me £6.50. When looking at the menu I realized their ‘mediums’ were the 125ml and a large was 175 ml. Considering 125ml is the smallest measure you can serve of wine, it seems strange to call it a medium. 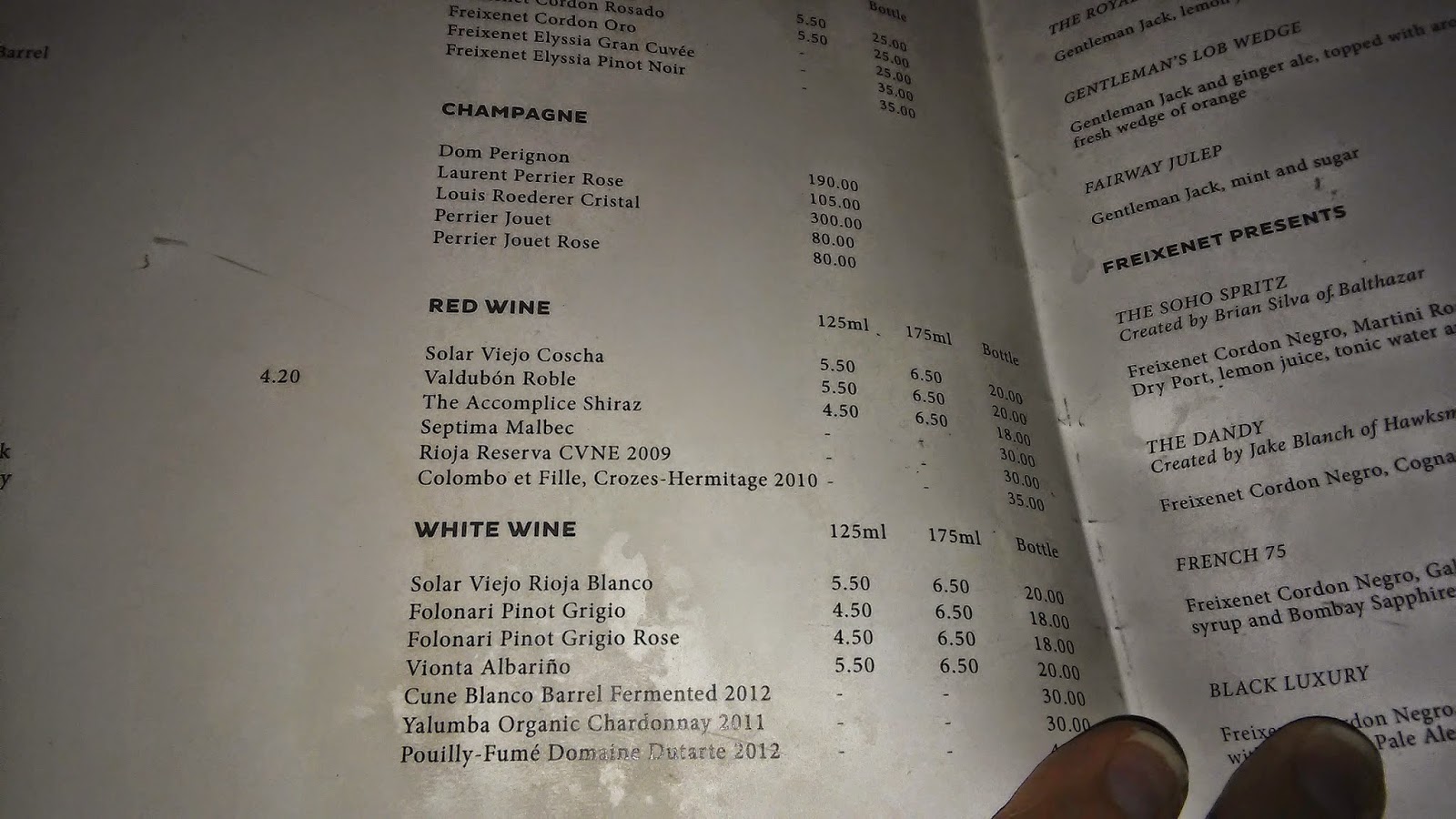 Now besides £6.50 being what I would expect to pay for a 250ml glass, what really annoyed me was the pricing structure. It seemed designed to catch you out. The pinot grigio was the house wine and if you bought the 125ml you paid £1 less than for the other wines. If you bought a bottle of the house wine, you paid £2 less than the other wines. But if you bought a ‘large’ (which I suspect is what most people would order and Swingers know this) you paid exactly the same as the other wines! Same with the reds. Having realized this after buying my first glass, I decided that if I had to pay the same price, I might as well get one of the ‘good’ wines. But then I was told they only had house because they were getting rid of stock (as it was the last night). I said I didn’t want that one as it wasn’t good value for money. “But the house wine is cheaper!” she said. And then I pointed out that it wasn’t. So then I asked for a red wine but they only had the ones they sold by the bottle. So finally I had to get a cocktail and pay an extra £3. It made me wistful for American service where they probably would have just knocked a quid off the wine, opened a red anyway, or given me a cocktail for the same price as the wine I wanted. No such initiative in England. The cocktail was nice enough – a sour made with Gentleman Jack but even so I thought £9 was a bit steep given what you can get elsewhere. So, by all means go, swing away. Just approach the ‘10th hole’ with caution!
Posted by Ginglesnuff at 1:58 PM