There is nothing like rich, moist, fatty duck with which to celebrate, even a minor occasion such as Valentine’s Day. And duck happens to be a speciality for Comptoir Gascon so of course we availed ourselves of it, twice over for me!

Comptoir Gascon is a French bistro in Clerkenwell, the more casual, much cheaper sibling to Club Gascon over the road. Stephen and I wanted to do our usual of going out for a nice meal pre-Valentine’s but we didn’t want to go overboard on the spending this year. Comptoir Gascon perfectly fit the bill, and we had a really delicious, hearty meal. 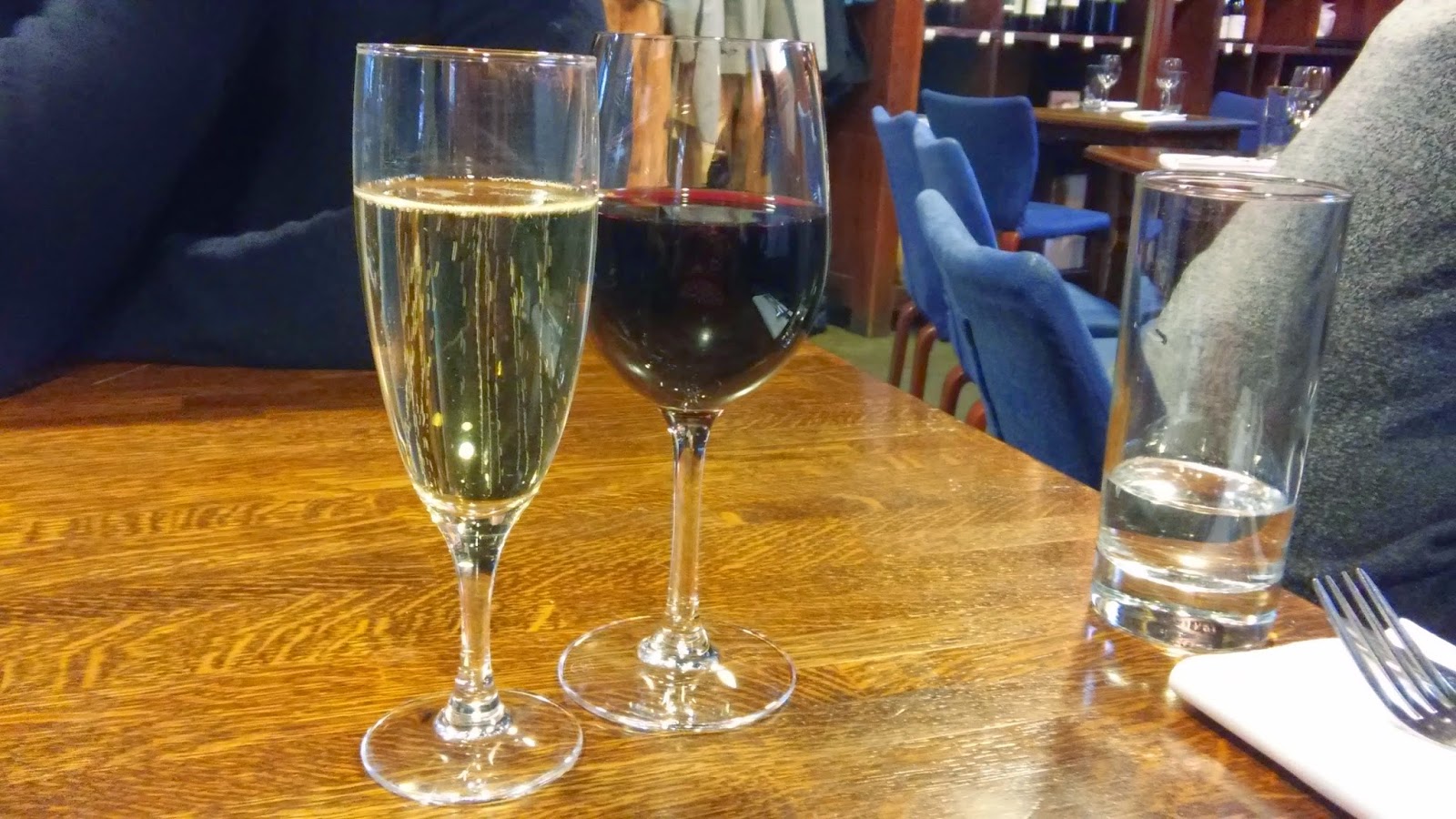 We started with a glass of bubbly, and then rather greedily ordered a whole bottle of juicy red wine as well. We weren’t sure we would be able to finish it all in the time it took to eat our meal but we needn’t have worried – it was so easy to drink we polished it off without much effort.

To start, I had the duck rilletes which came with sourdough toasts. This was gloriously fatty, shredded duck which I was happy to plough into on its own, as well as piling it upon the bread. More bread would have been nice but eating it on its own was no chore, especially with some crunchy cornichons to lighten it a little. 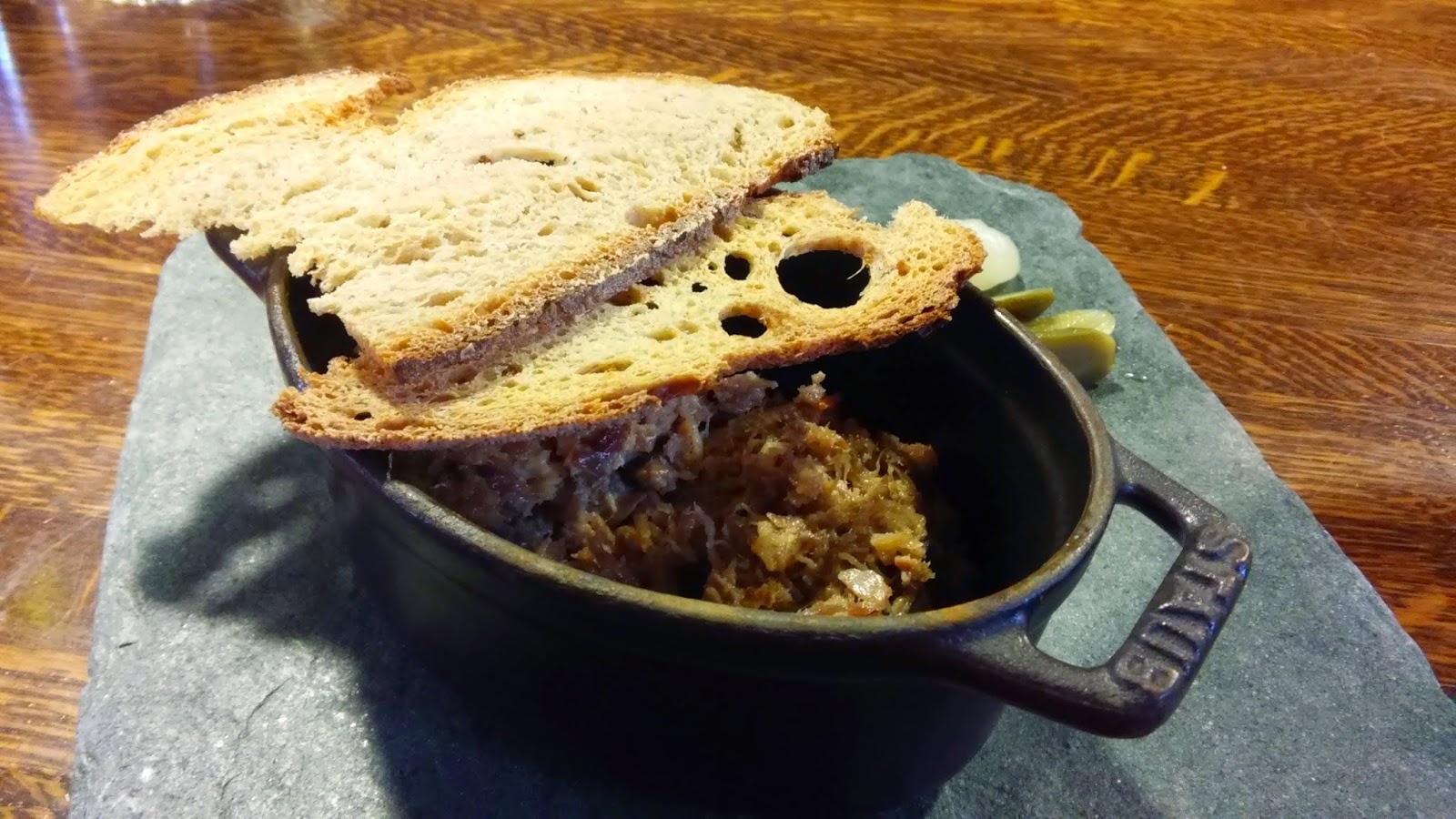 Stephen had the ‘piggy treats', which I warned him didn’t come with any bread. He said he wouldn’t need any but then regretted he had none for his pates. Still, it was quite filling so from that point of view bread was probably unnecessary. There was so much there I can't quite remember it all - charcuterie, pancetta, terrine, black pudding - even pigs' ears. A treat indeed (maybe not so much the ears, still find them weird). 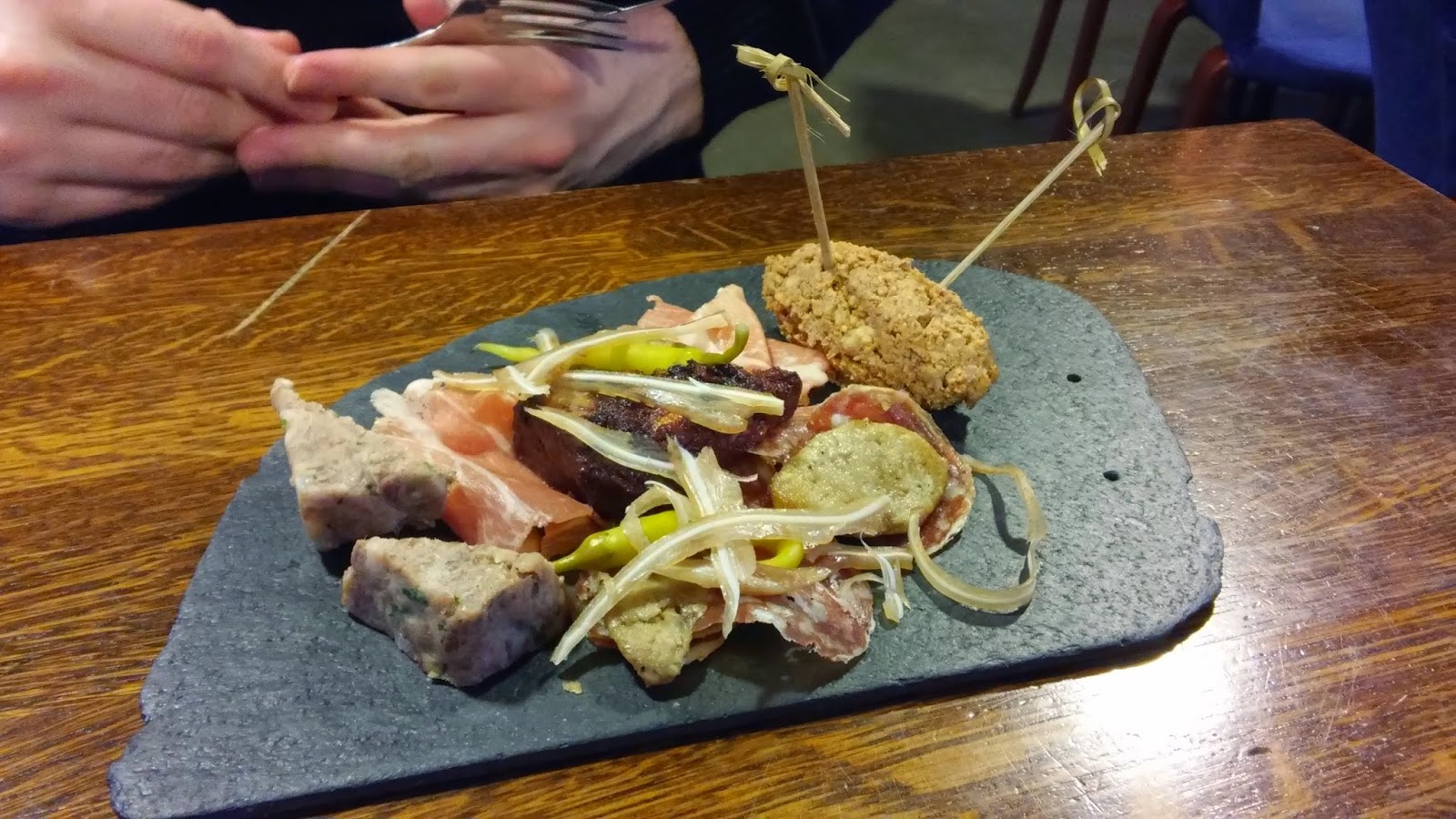 Stephen had the cassoulet and I had the confit duck with garbure. My vibrant sauce was very garlicky and salty and I very much enjoyed swishing my melt-in-the-mouth duck with its crispy skin in it. The veg was a waste of space and not particularly nice – they could have been canned potatoes and carrots for all they added, slightly too mushy to be pleasant.I know garbure is traditionally a veg stew but I say ditch them and just keep the soup! 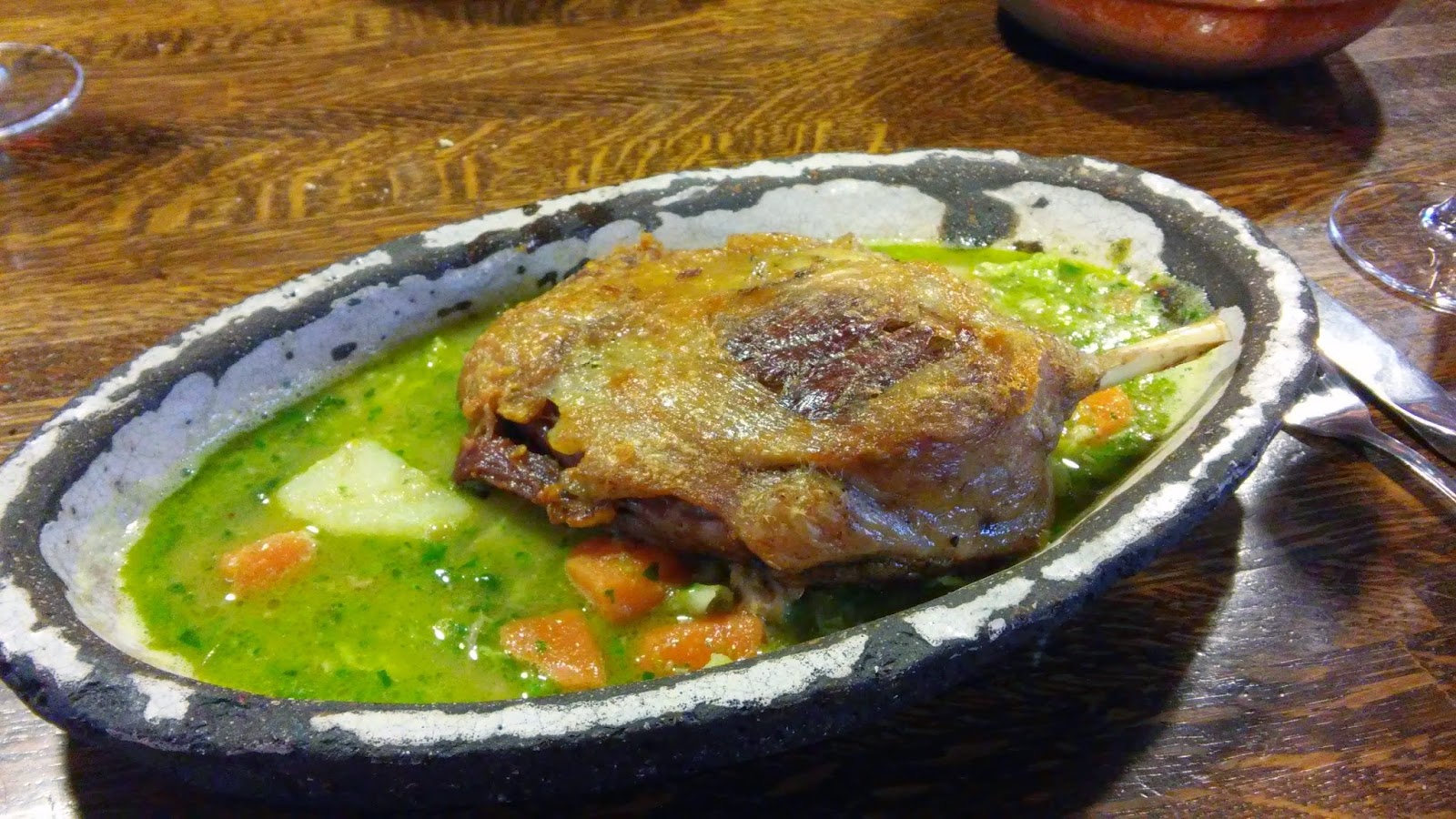 Stephen’s cassoulet was a thing of stodgy, meaty, juicy beauty. The duck was every bit as good as mine, and the sausage added some earthiness to it. Beans were perfectly cooked. Food coma was induced. 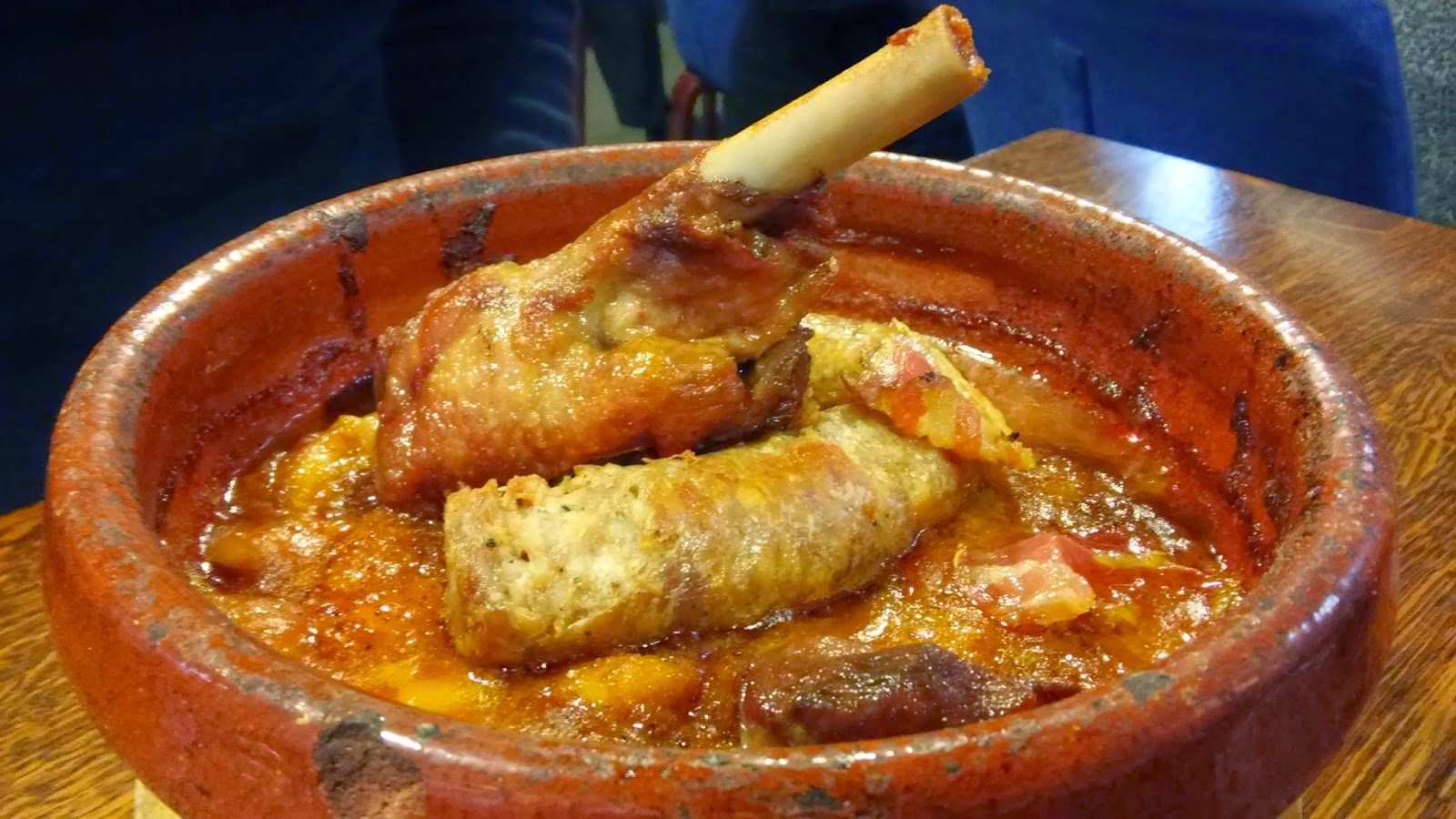 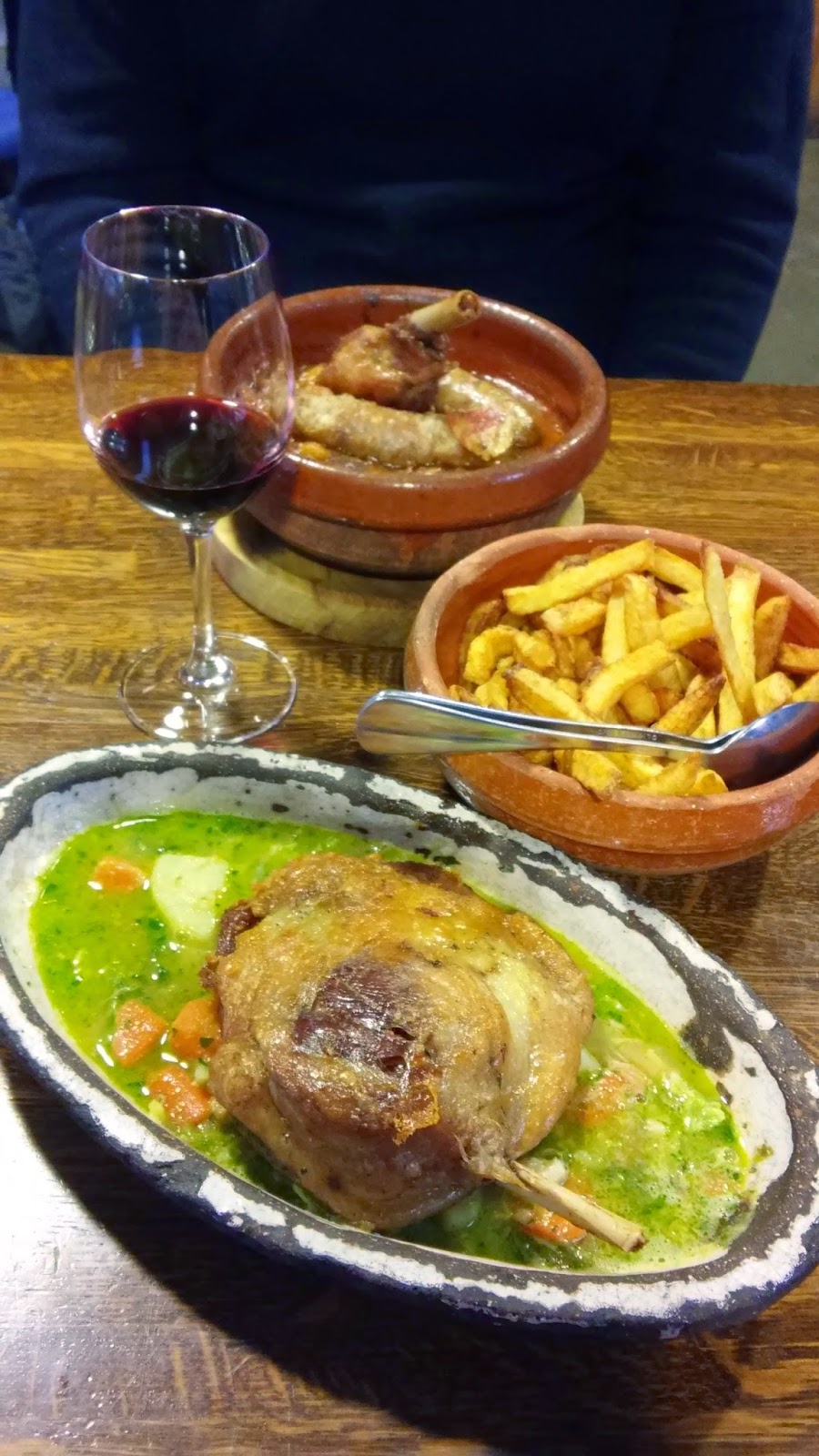 Almost literally – after waddling out of here I went straight home and slept the meal off before I went out for the night – we didn't even have dessert! of course, we had also shared a portion of chips - these regularly appear on 'best chips' lists and it's easy to see why. They were obviously freshly made in-house, with duck fat (more duck!) and 'crazy salt' which just seemed to be salt with a bit of spice to it. Anyway, they were delicious and moreish, though I let stephen eat the majority as I was so stuffed from my food. What a meal!

Posted by Ginglesnuff at 1:53 PM