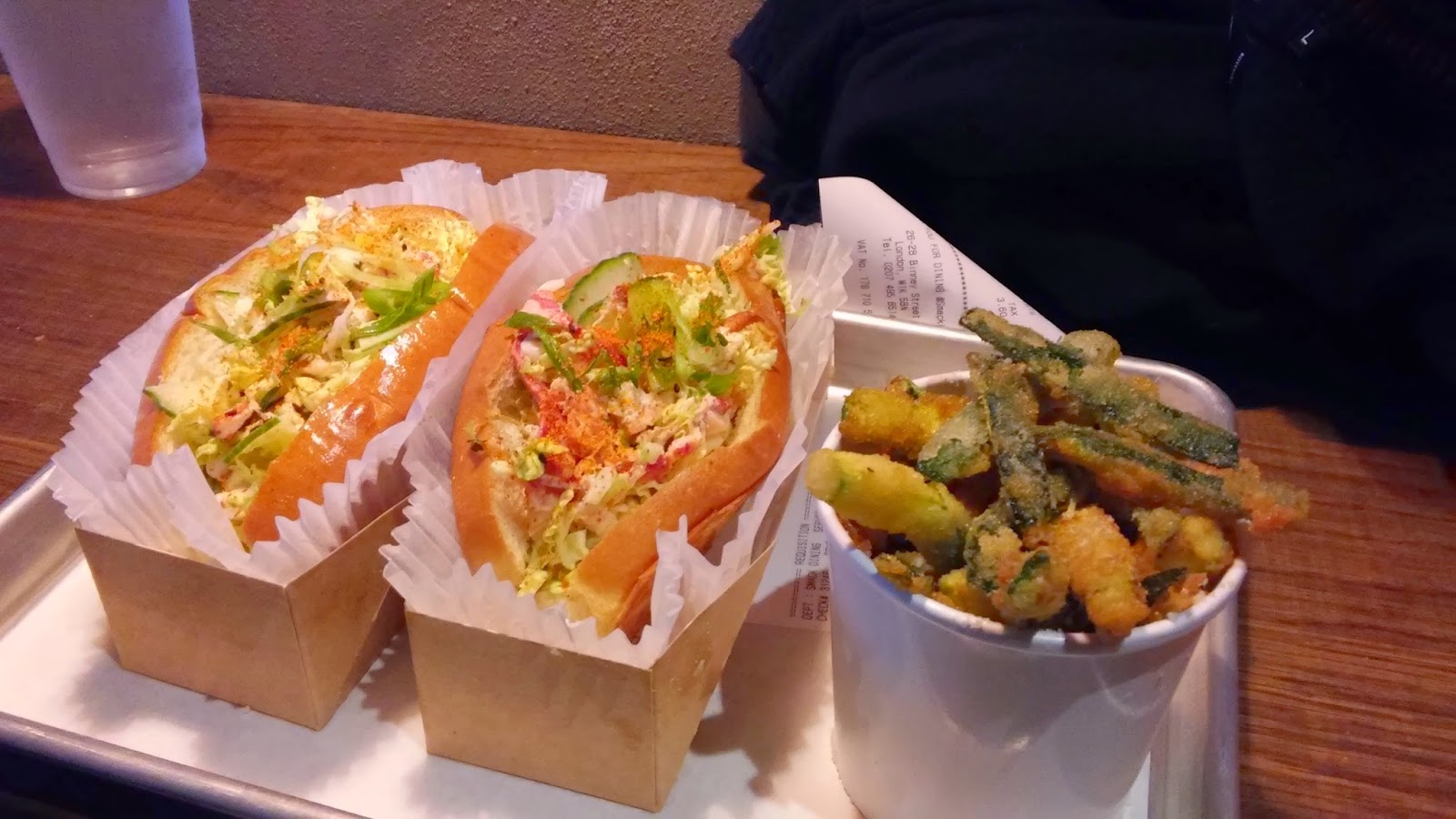 You’ve got to hand it to the people behind Burger & lobster – they like crustaceans and they want you to be able to have them in some form no matter your budget. They went uber high-end with Beast and now they’ve gone the other way with Smack Deli where you can pop in for a lobster roll for £8. Add some courgette fries to that and you won’t top £12 (compare to their £20 for lobster roll and chips and you see how reasonable this is). It’s also really tasty. They have four different types of rolls but Stephen and I had the same so I can only tell you about one. It’s the one I’d heard the most about – the Seven Samurai. The delicate Asian flavours work really well with the fragile lobster taste. The roll is more like a big slab of sweet bread folded in half, almost challah-like rather than the standard brioche bun. I seemed to have far more lobster than Stephen so amounts may vary – you do need a generous portion to compete with all that bread, lovely though it was. 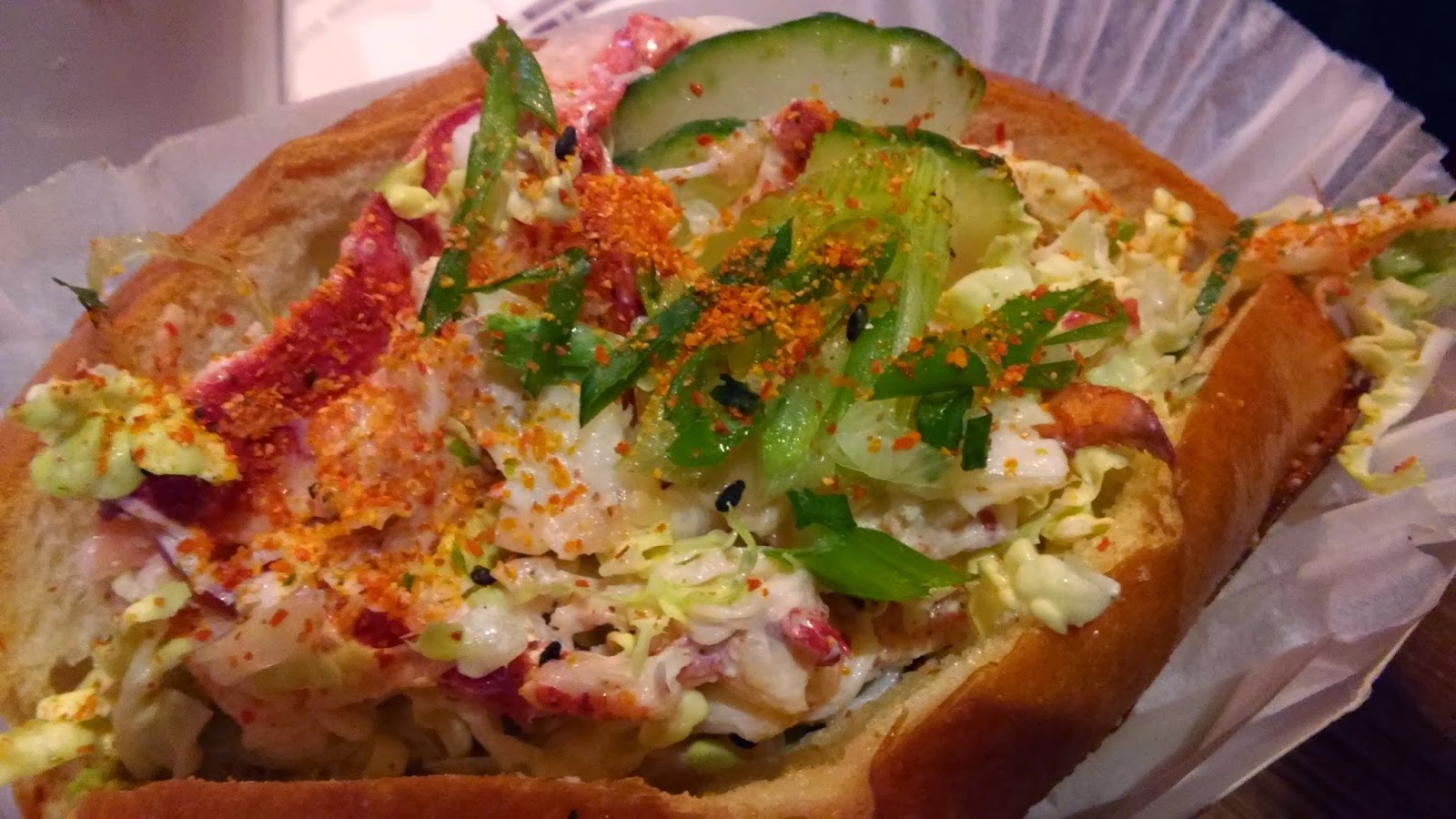 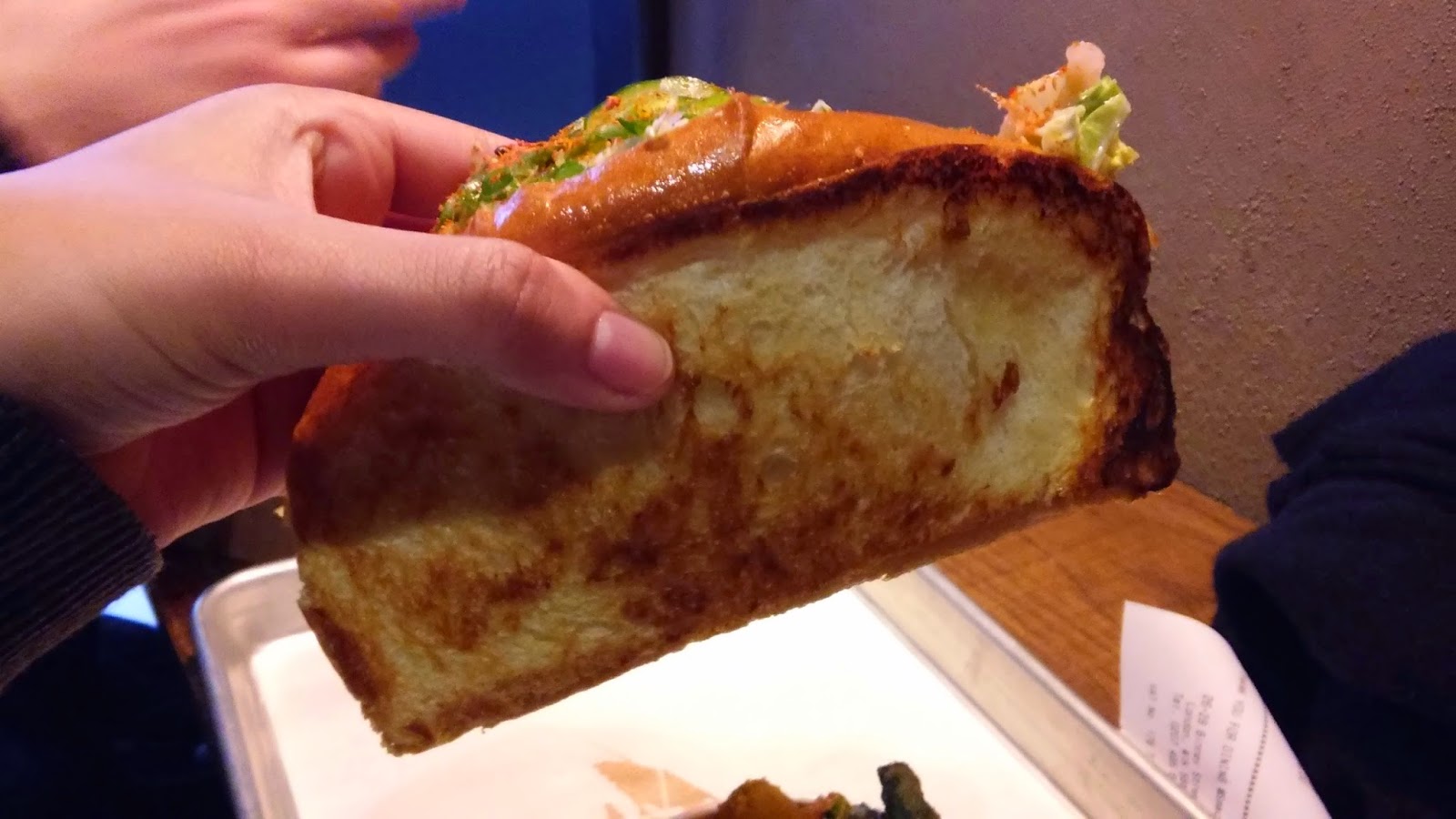 The courgette fries are worth a trip as well. Crunchy, and addictive. I would have appreciated some sort of sauce or dip to go with them but the courgette was juicy enough on its own for that not to be a dealbreaker. I’ll definitely pop in here again when I want a quick bite to eat and I’m in the Oxford Circus area. Lip-‘smackin’ good!

Extra brownie points for the pour your own beer tap! 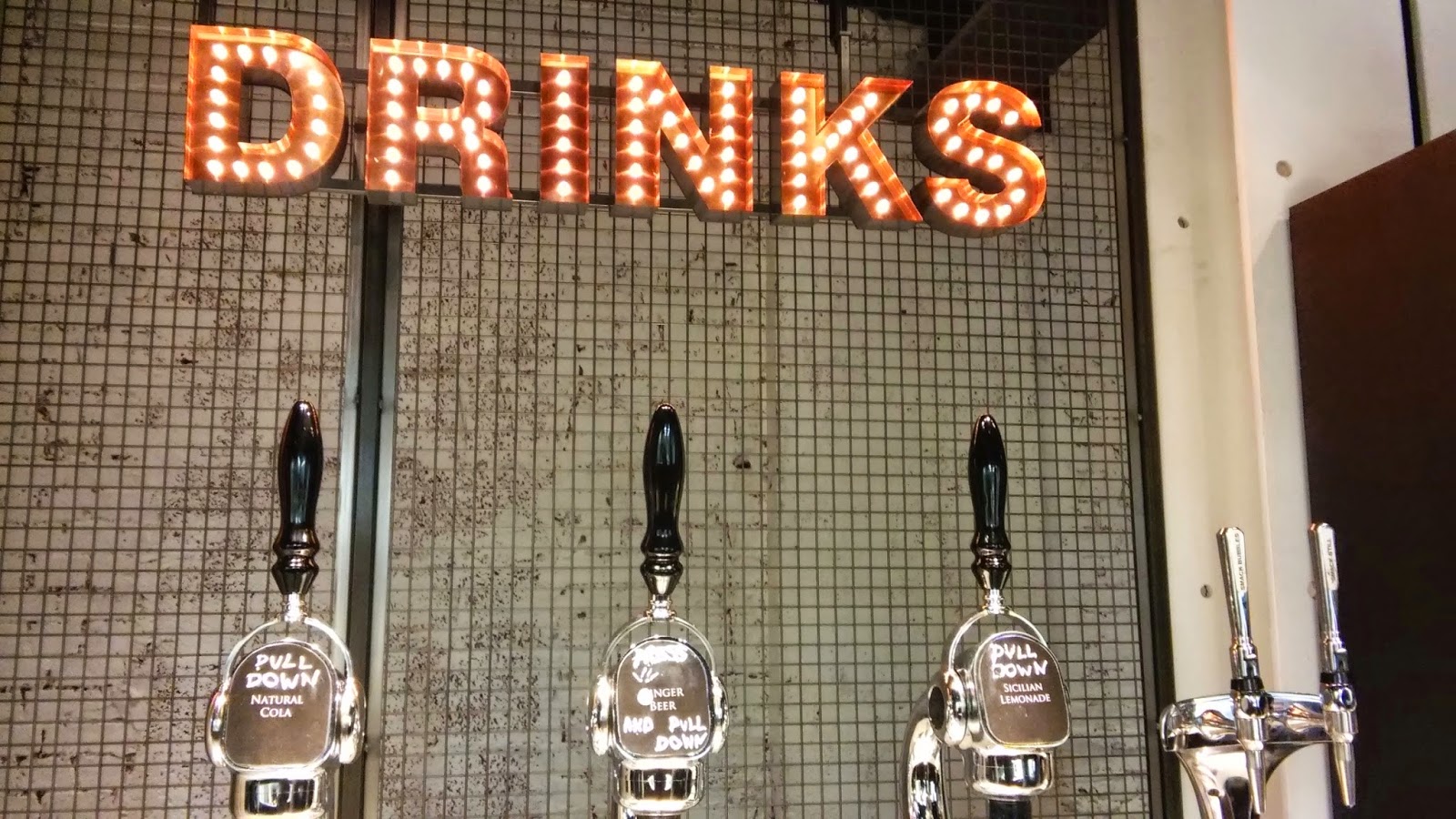 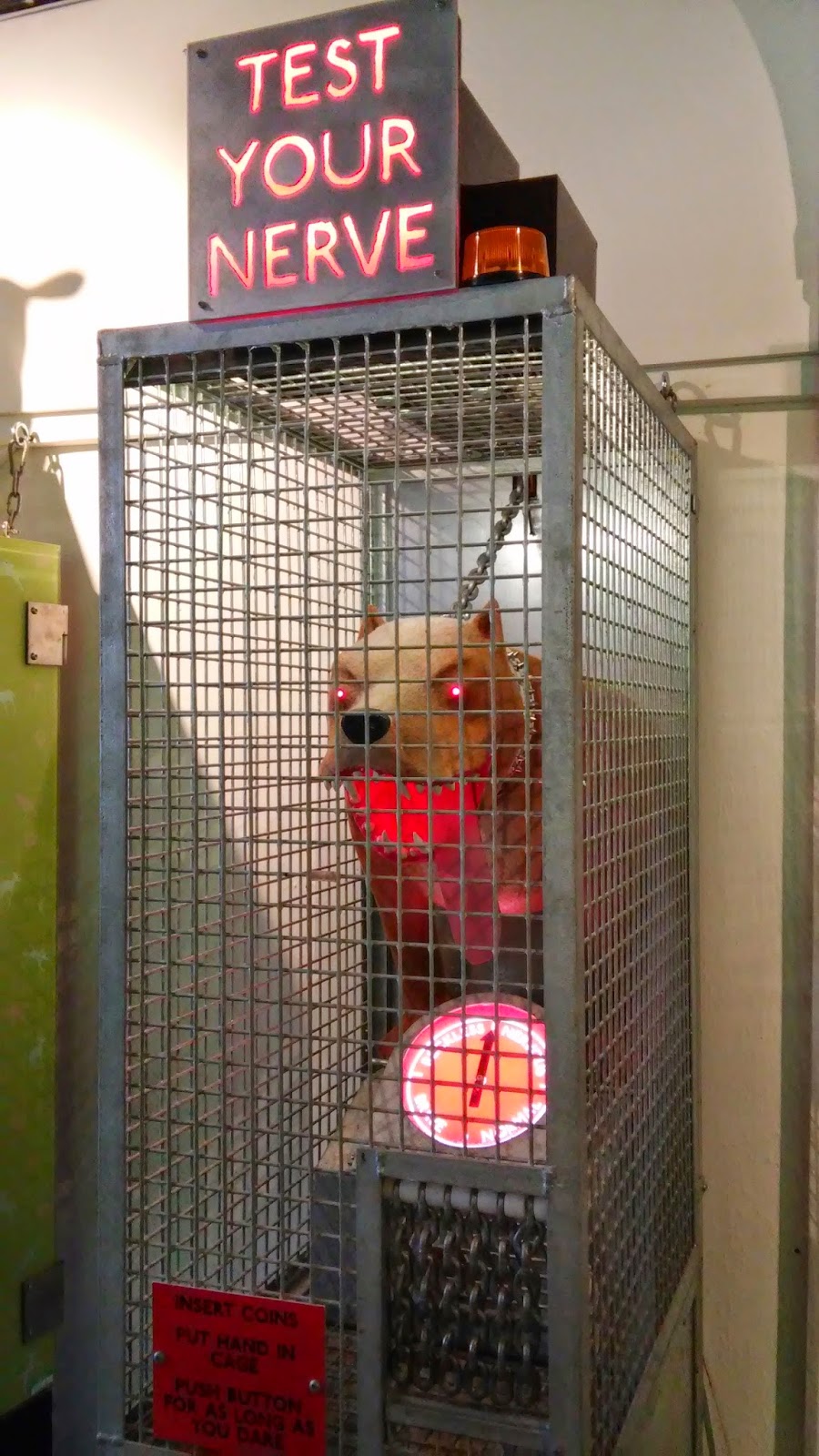 After this we strolled round to Holborn to check out the new Novelty Automation gallery from Tim Hunkin. It’s free to get in but if you want to operate one of them yourself it’s £1-£3 depending on the complexity of the machine. The kids there absolutely loved them but they’re amusing enough even for child-free adults, with quite a lot of them being darker in tone or humour than you might suspect. Stephen strapped himself into his own private, instant eclipse (probably better than the real one the other day) and I got felt up on the Autofrisk. We watched someone else brave the rabid dog in Test your Nerve, and chuckled dryly at the machine that offered you a holiday without all the nuisance of travelling, too much sun and annoying fellow tourists.

Well worth popping by for a few giggles but you probably wouldn't spend more than an hour there if that.
Posted by Ginglesnuff at 12:31 PM