Another Friday, another bar crawl. Quite an extended one this time – it was time for some list ticking in Stoke Newington/Dalston.

I met Stephen at the relatively recently opened 125 Church Street where White Rabbit Cocktail bar was previously, and before that it was the Baby Bathhouse. I don’t know why but places that open on this spot don’t have much longevity. We shall see whether the folks behind the Blacksmith and the Toffeemaker have better luck.

The place looks very different from the last time I was there – it is clean and bright, and feels more like a café than a bar. We had just the one drink here and some food. Their food menu is short and simple – American-style sandwiches: The Cuban, The Reuben, a Grilled Cheese and a sandwich of the day. Being that reubens are somewhat proliferative in London now, I gave the Cuban a go. Stephen, still in his pescatarian month had the grilled cheese. They each came with crisps and some coleslaw that had a very light touch on the mayo and included mint; a simple twist that made a big difference. 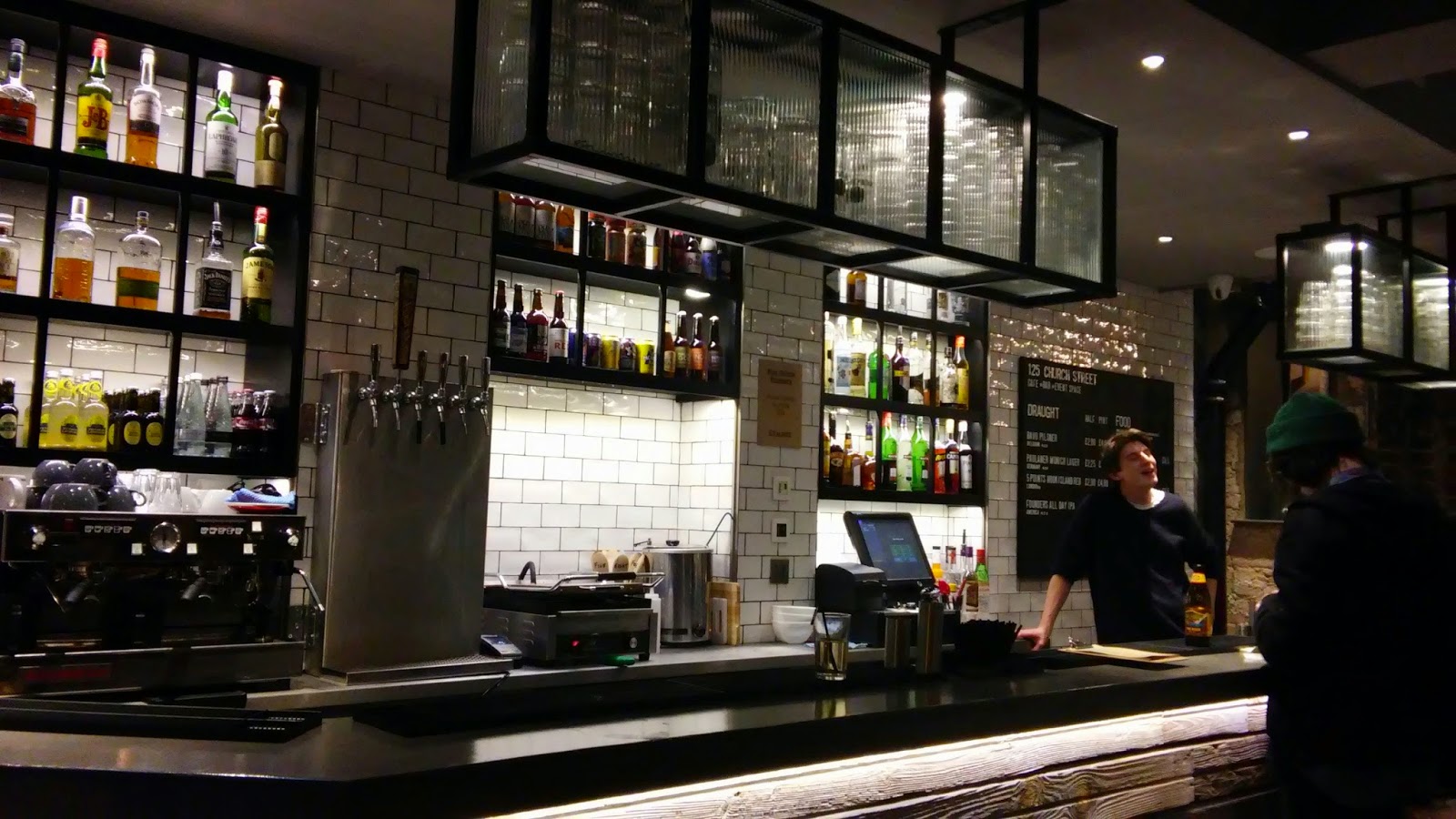 The sandwiches were lovely. Mine had gherkins and American mustard giving it a nice tang, and had a decent amount of pulled pork in it along with the ham and cheese. Stephen’s sarni was so full of cheese it cascaded down the side of the basket. He was duly impressed with the taste – it had everything but the kitchen sink: mozzarella, swiss, cheddar and an American-style cheese. Pretty good value at £5 for his and £6.50 for mine. I also had a fruity but dry white wine at £5 for 175 ml. Would happily revisit but it’s a little out of the way for me, and I suspect many others, and this could lead to its downfall. I hope not though. 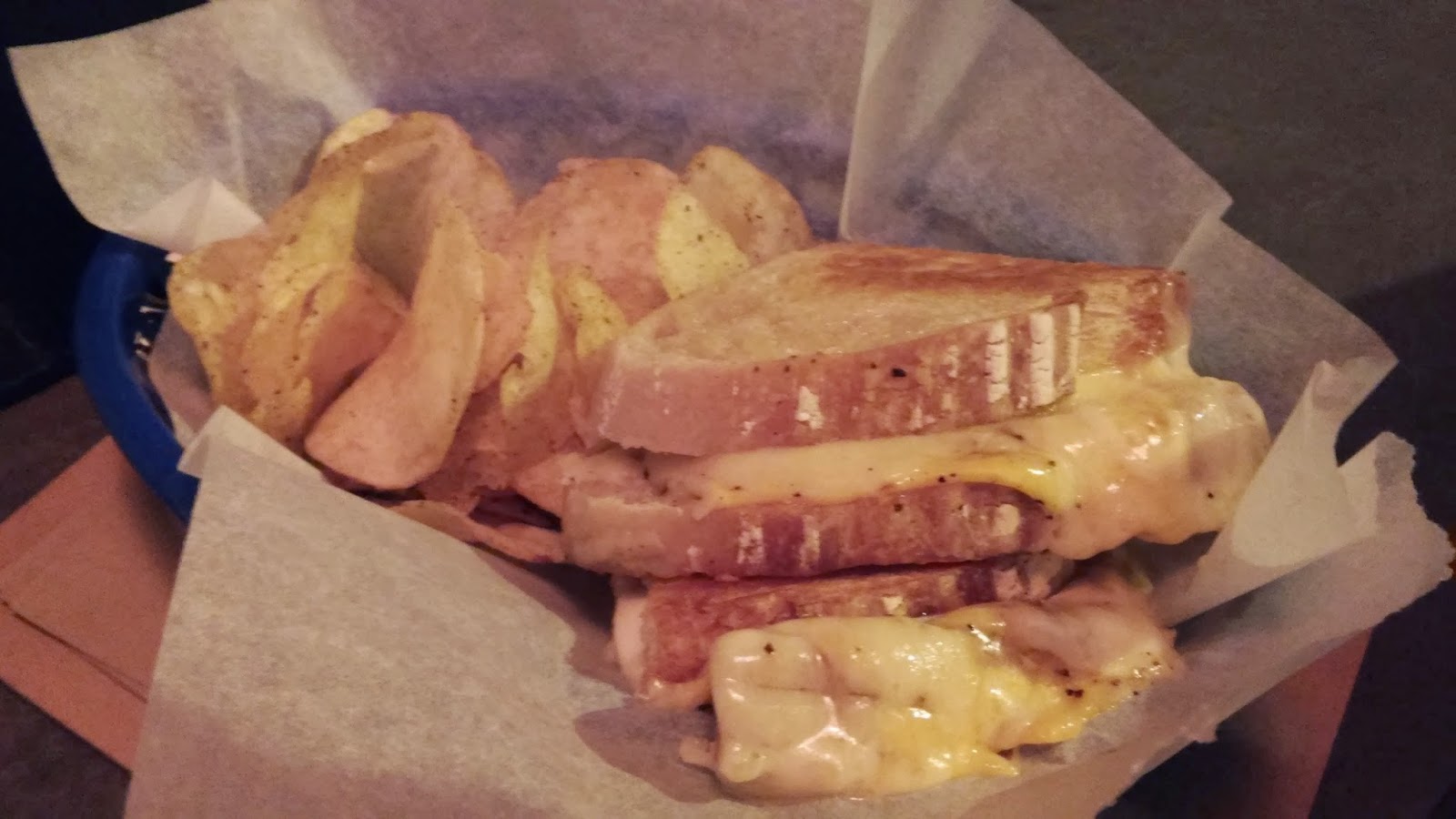 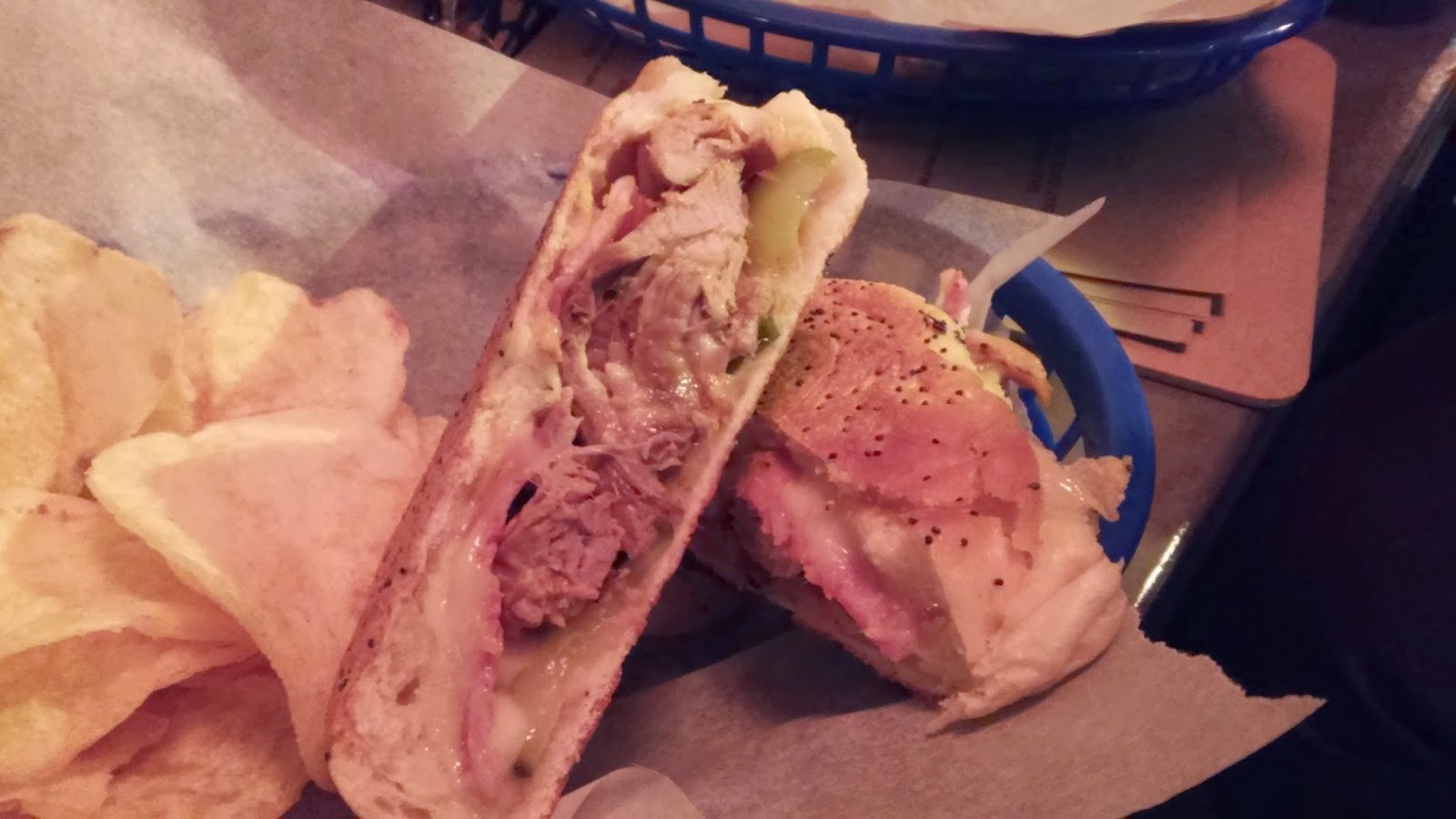 Then off we went to Original Sin, the new cocktail bar from Happiness Forgets which just oozes American at you as you enter its subterranean sepia setting – it’s a bit like walking into an Instagram filter. A long bar down one side and booths down another plus a pool table (with brown felt) at one end create a sophisticated but fun ‘Mad Men’ atmosphere. And the pool table is free! I was surprised at how big the place was, especially compared to Happiness but it soon became quite full so the space is needed. 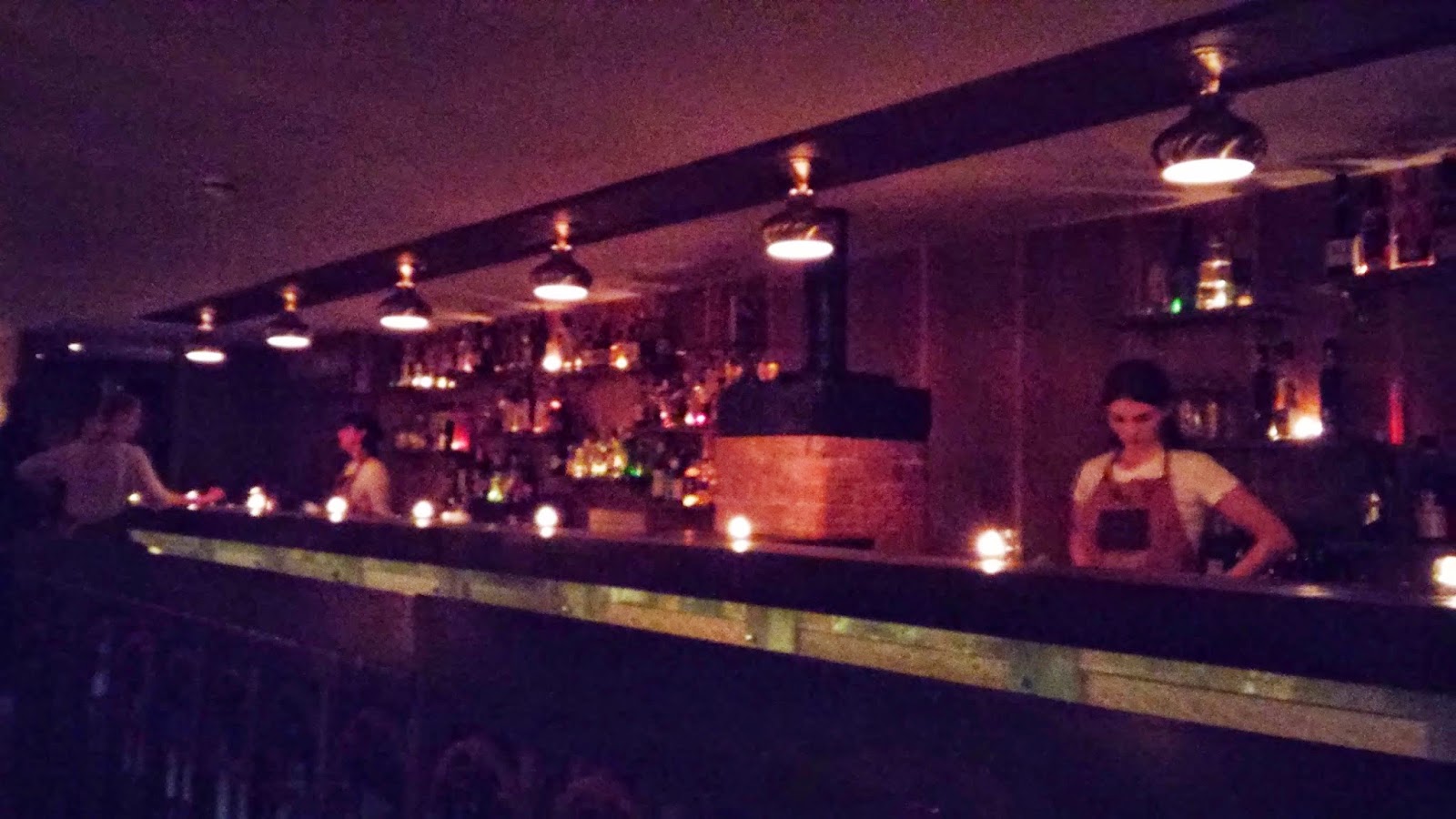 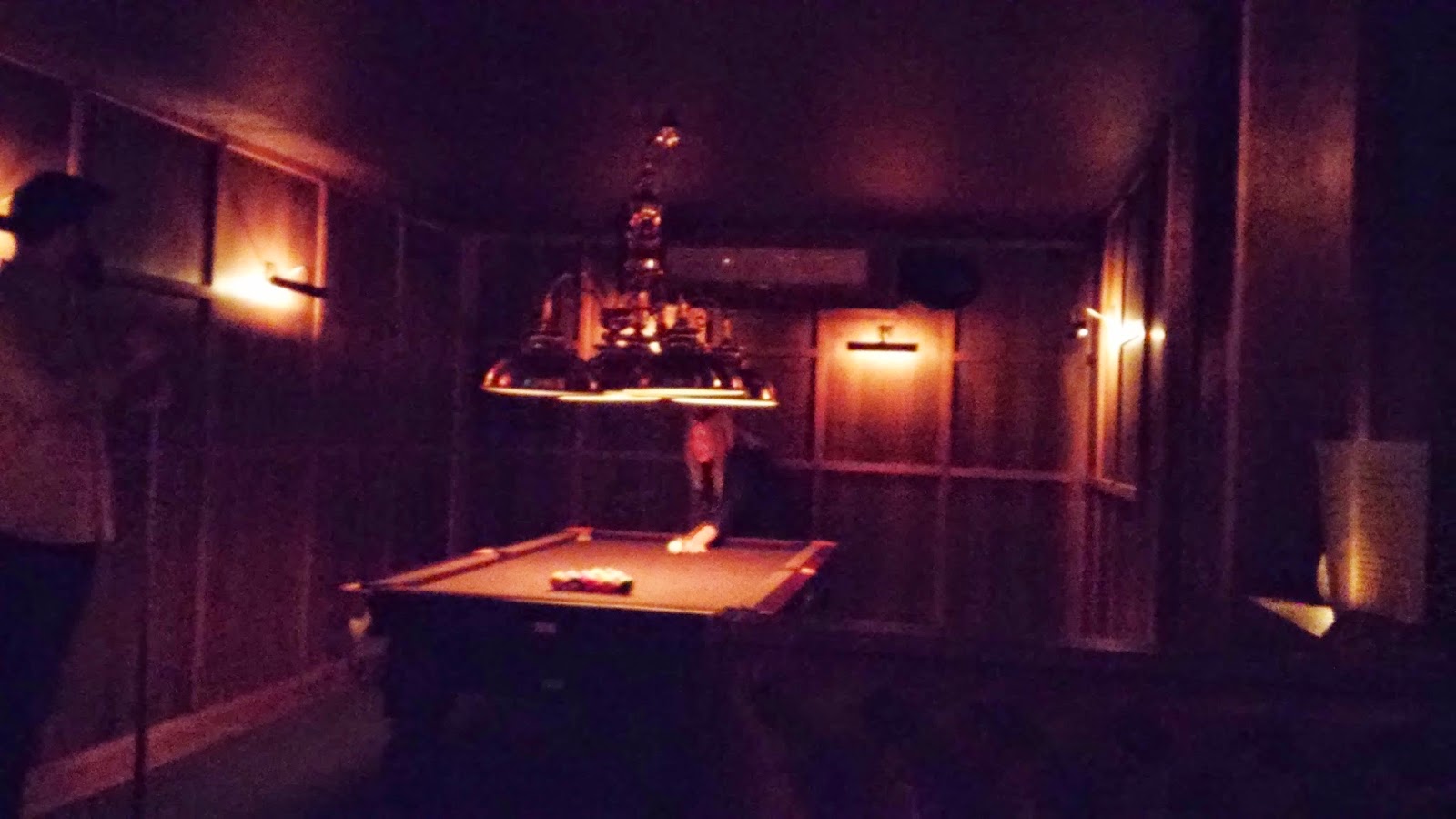 We had two drinks in here but I would have happily stayed longer if I didn’t have other places to try. The cocktail list is not overwhelming and prices are a pleasing £7.00 for highballs and £8.00 for the rest. My Mr Sandman tasted strongly of the all spice it was flavoured with, which I liked, although it felt more appropriate for the Christmas season, to be drunk with a ginger biscuit. (Funny I should end up ordering a drink made with Remy Martin when it was Remy that got me to Happiness forgets in the first place.) Stephen’s Perfect Storm was fiery with ginger and sweet with plum brandy and I loved it. 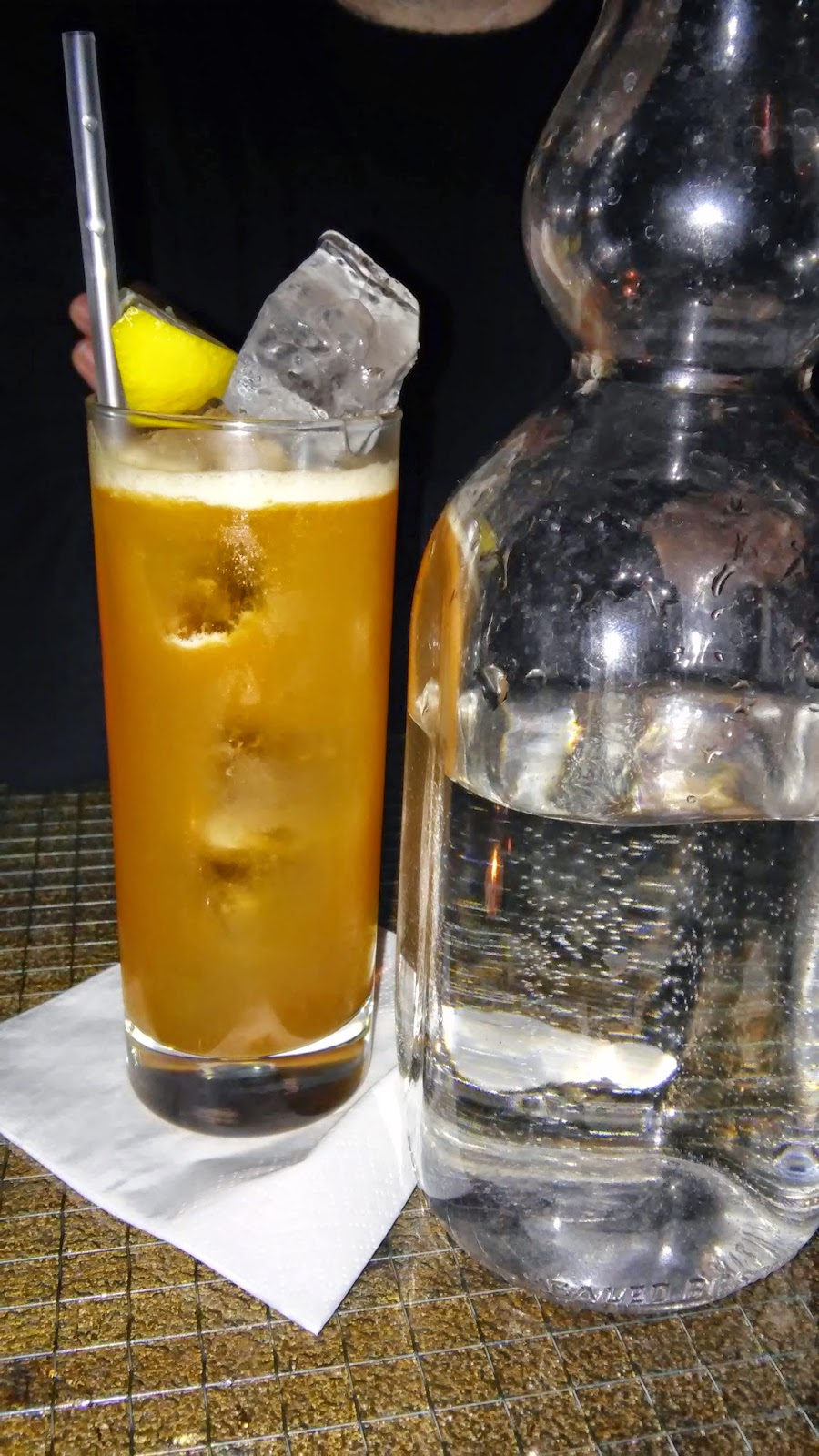 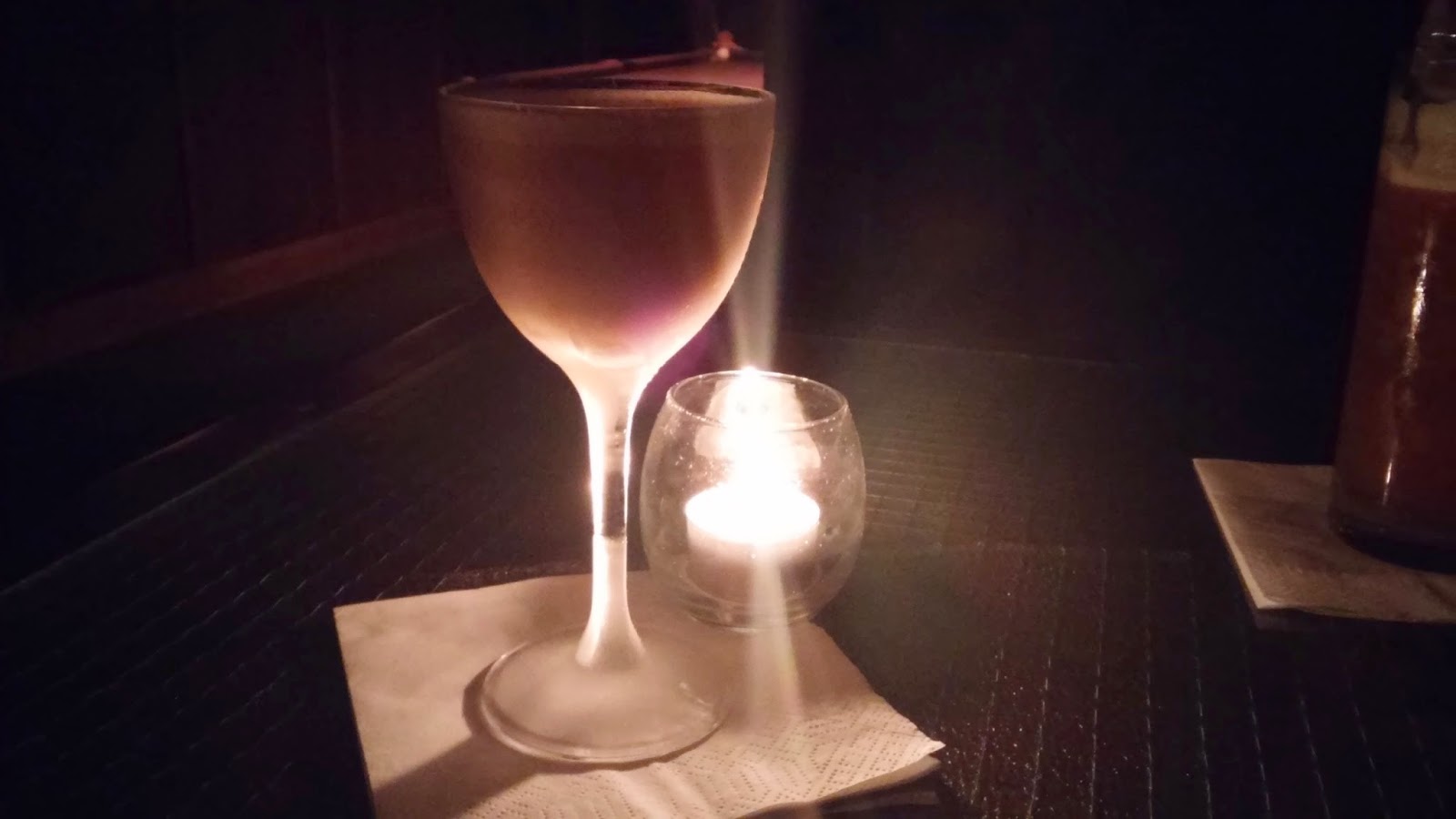 He liked his second one, the Kashmir, even more though it was a bit too heavy on the cardamom for me. Actually, my second drink was a misstep for me as well – the Sea City didn’t have enough of the smokiness I associate with mescal for my taste and was way too salty for me. It was a bit too much like drinking the sea, rather than the refreshing drink I’d imagined. 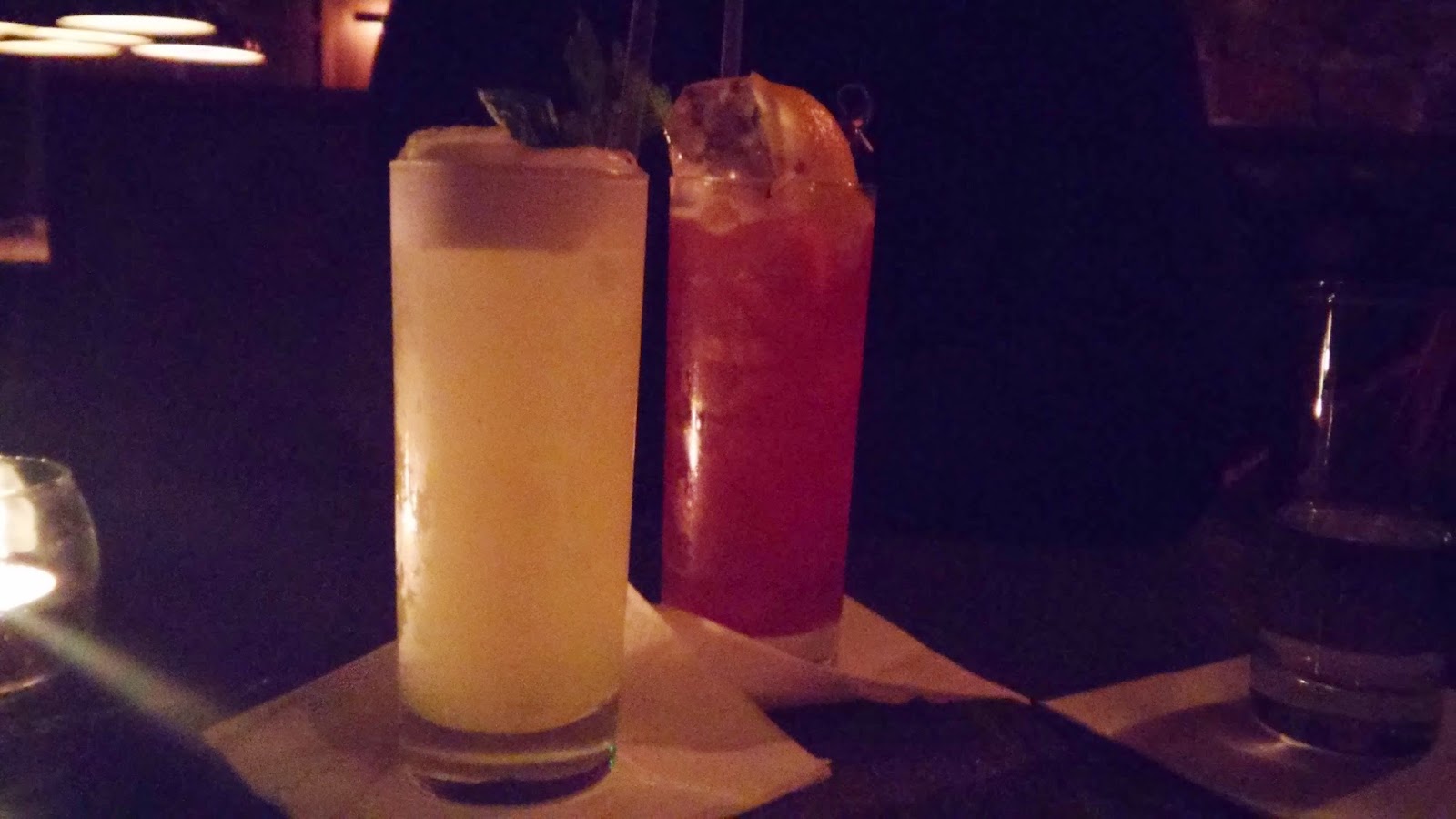 We played a couple of games of pool while the place filled up before sitting down in our booth to finish our second drink. It was both cosy and lively once a few people were there, playing some easy-on-the-ears blues and soft rock (there was some song overlap with here and High Water so this must be the music to drink cocktails to) . Overall though, this is a great bar to get comfy in but we had two more places on the list to cover so we moved on. 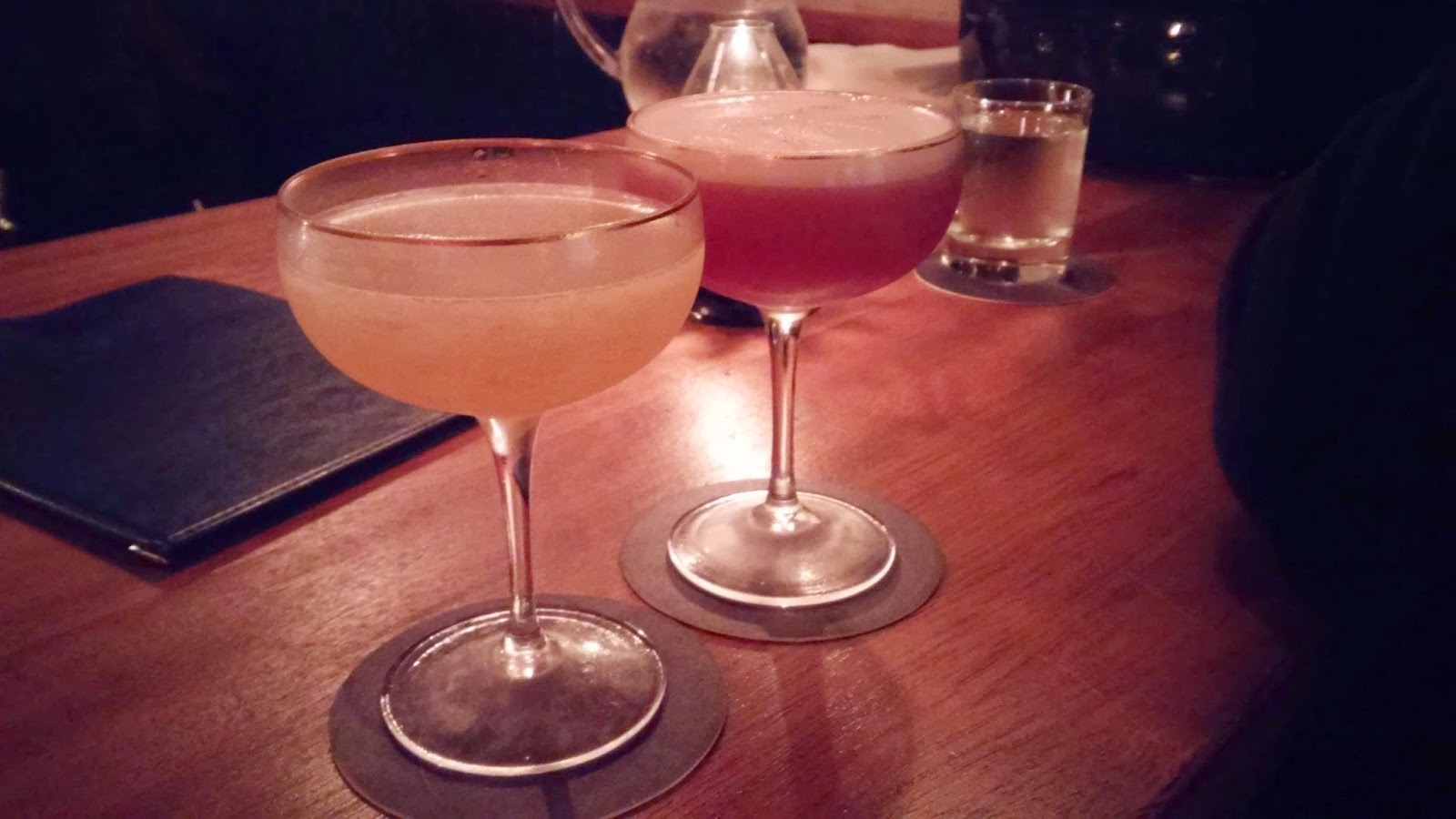 Next we went to High Water which is where Bar 23 used to be. While I liked the bar itself, and the bar staff, the cocktails didn’t do much for us. They were rather plainly presented and the tastes weren’t as complex or as rich as I would have liked. And, especially compared to where we had just been, it seemed expensive for what you got (£9 or £9.50 standard). I couldn't resist the ridiculous-sounding Foo Foo Band Night but it didn't live up to its crazy name and flavours of peanut butter rum, lime and banana. It was incredibly subtle. Stephen's French Leave was the same - tasted alcoholic and faintly fruity but not enough of its ingredients to make a huge impression. We switched to beer and wine after, and while I’d be happy to come back here, I wouldn’t make a special effort for the cocktails again. 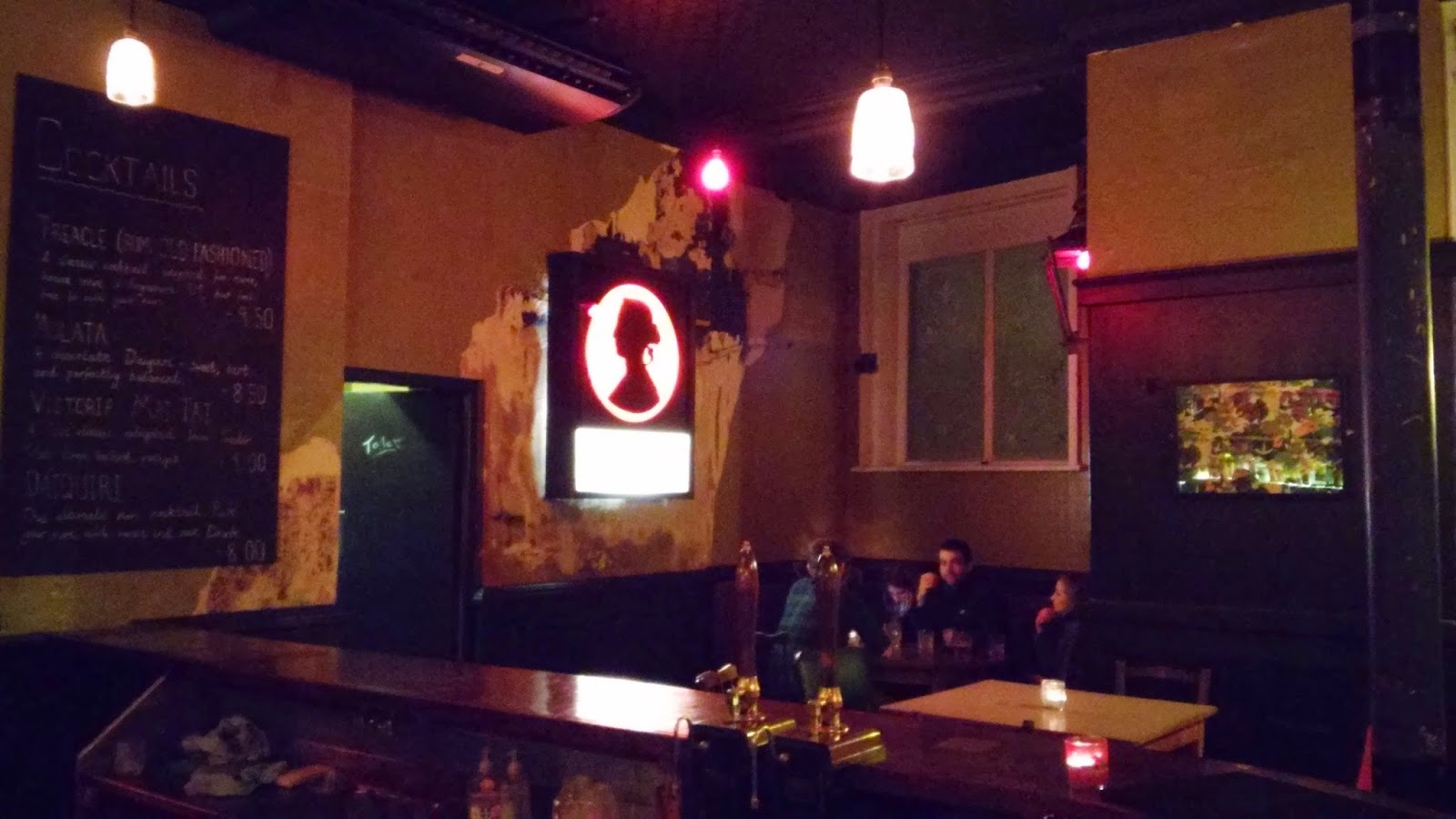 Final stop for the night was the Dalston Victoria, something of a Dalston institution I believe, and frequently a gig space, though not on the night we went. There was no getting away from the fact that it smelled awful when we arrived but our noses soon acquiesced to it and we rather liked the place. Definitely of the ‘dive’ variety, it was kind of bare and not even very busy when we were there on a Friday night. A round cost £10 on the nose (rare to find a place where two drinks is £10 or less) and the drinks were good. It had that typically east slightly shabby, eclectic thing going on with a lightbox of Victoria's head and a wall of books making it feel a bit like someone's house. I believe this has either just changed hands or is about to (a quick search reveals the Dreambags crew are taking it on), and that they might even have a street food residency in the kitchen soon. From this lot I wouldn’t expect it to lose too much of its ‘diveyness’ and should remain a proper boozer with a gig space out the back as it has been for so long. One to remember. 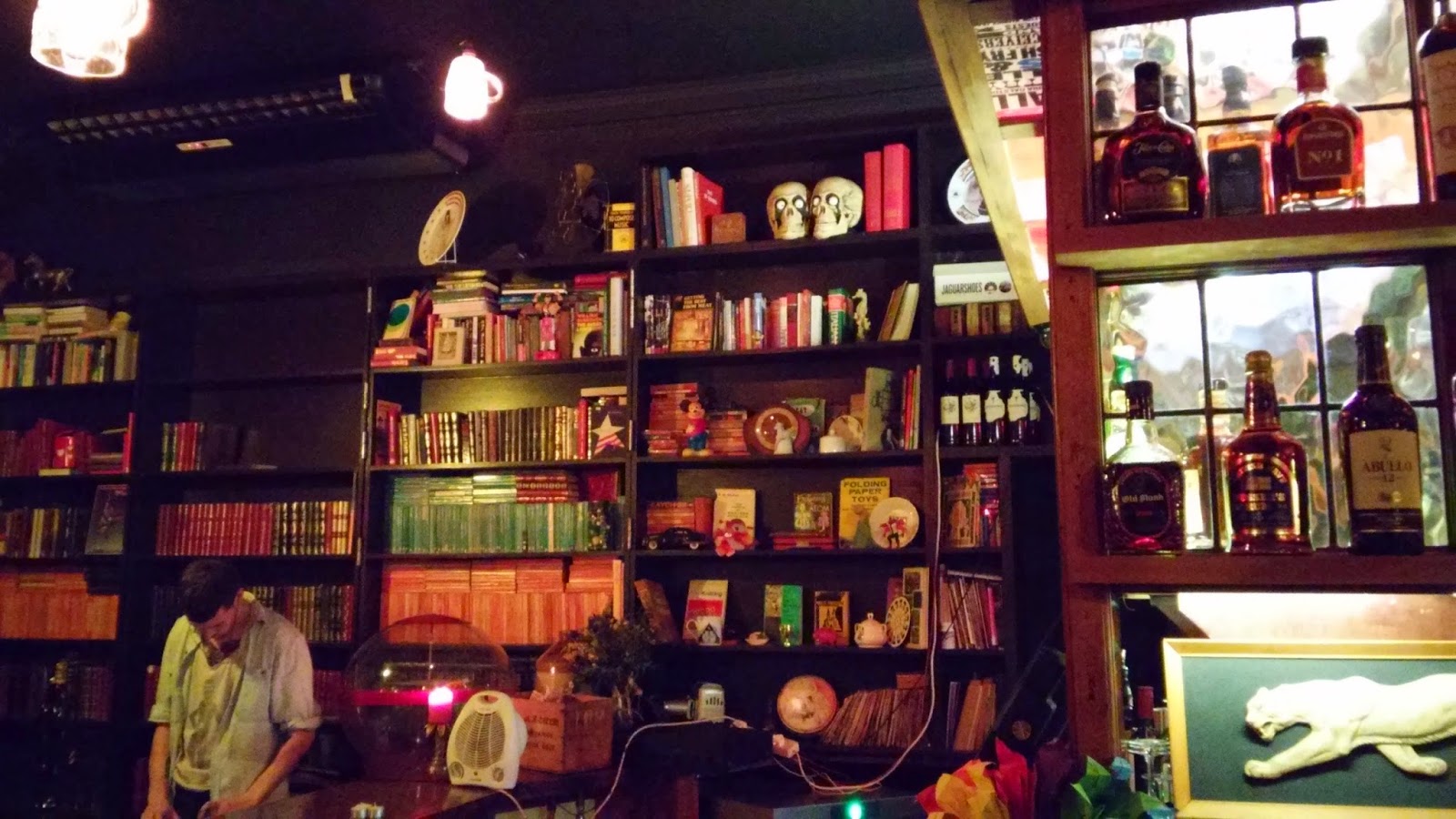 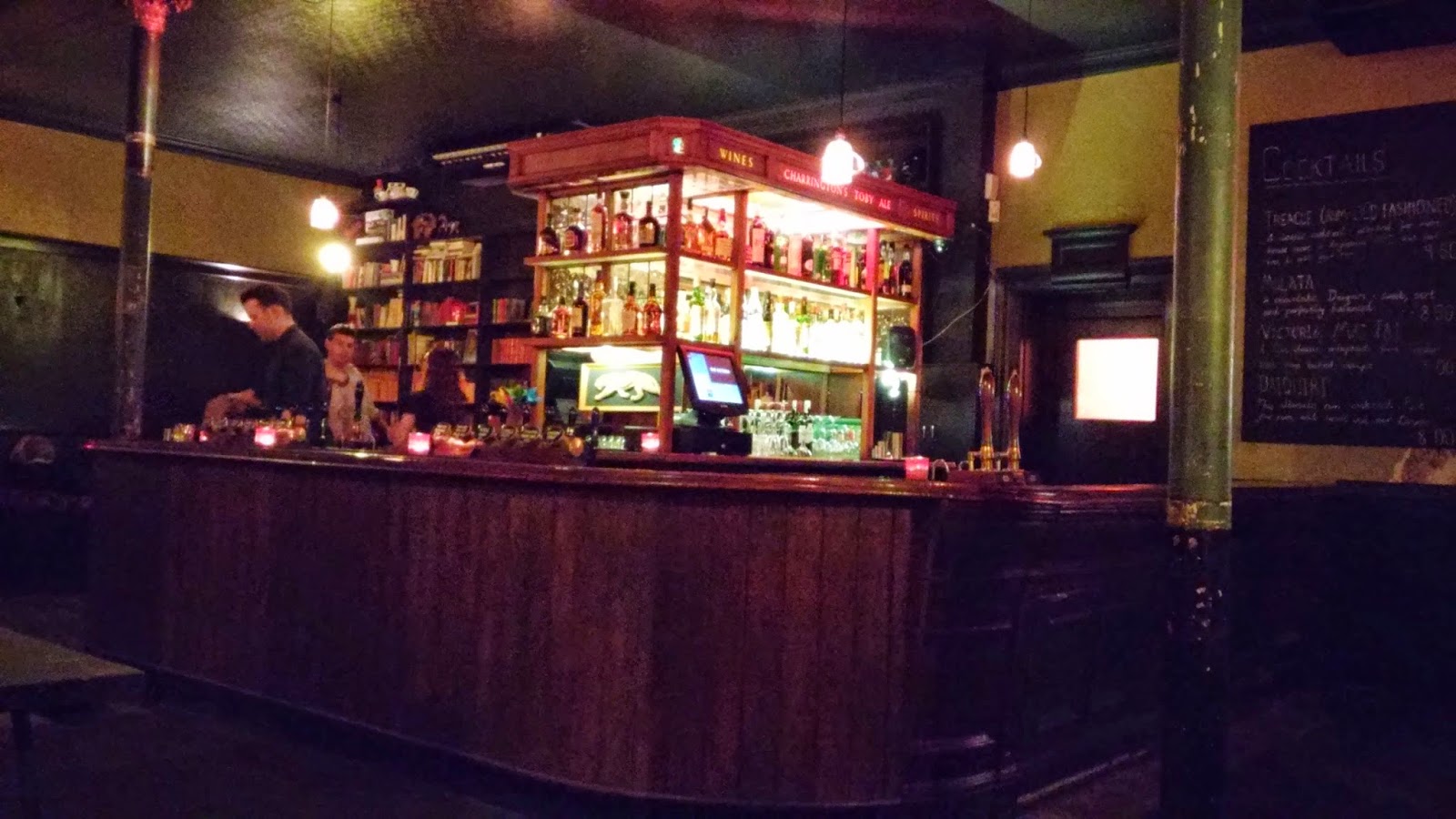