I’d noticed that this Kouzu restaurant kept popping up in my Twitter and Instagram feed and lots of lovely things were being said about.  So I was more than delighted when I got an email inviting me to come and review the place. Invites are still very much a novelty for me, and they do help me keep the blog going without ending up too much out of pocket.

And, like I said, everything I’d seen so far had been positive, though I didn’t want to read too much in case I formed a view before I went there.

As much as I enjoy the privilege, I do find these things a little awkward. I’ve never been one for much one-on-one attention so I made sure to enquire in advance what the deal was. We were told we could have three courses each plus a drink but in the end we had so much more than that! Much more than we probably would have ordered for ourselves if left to our own devices, but I could see they were keen for us to see what they could do in all areas.

I don’t know what I can say that hasn’t already been said but wow. This place is the business. And they also have quite savvy business sense. January is such a slow month for restaurants and bars as everyone decides to make up for all the money and calories they spent in December. Perfect time to invite a bunch of bloggers in and create a bit of hype then. And they deserve it. They’ve chosen a rather odd location in London to set up – a few minutes’ walk from Victoria station. While this is in fact a nice part of town (as soon as you escape the immediate environs of the station), it’s not really known as a destination for food. But if you’ve got a bit of dosh in your pocket then it is worth coming over to St James to try this place out. 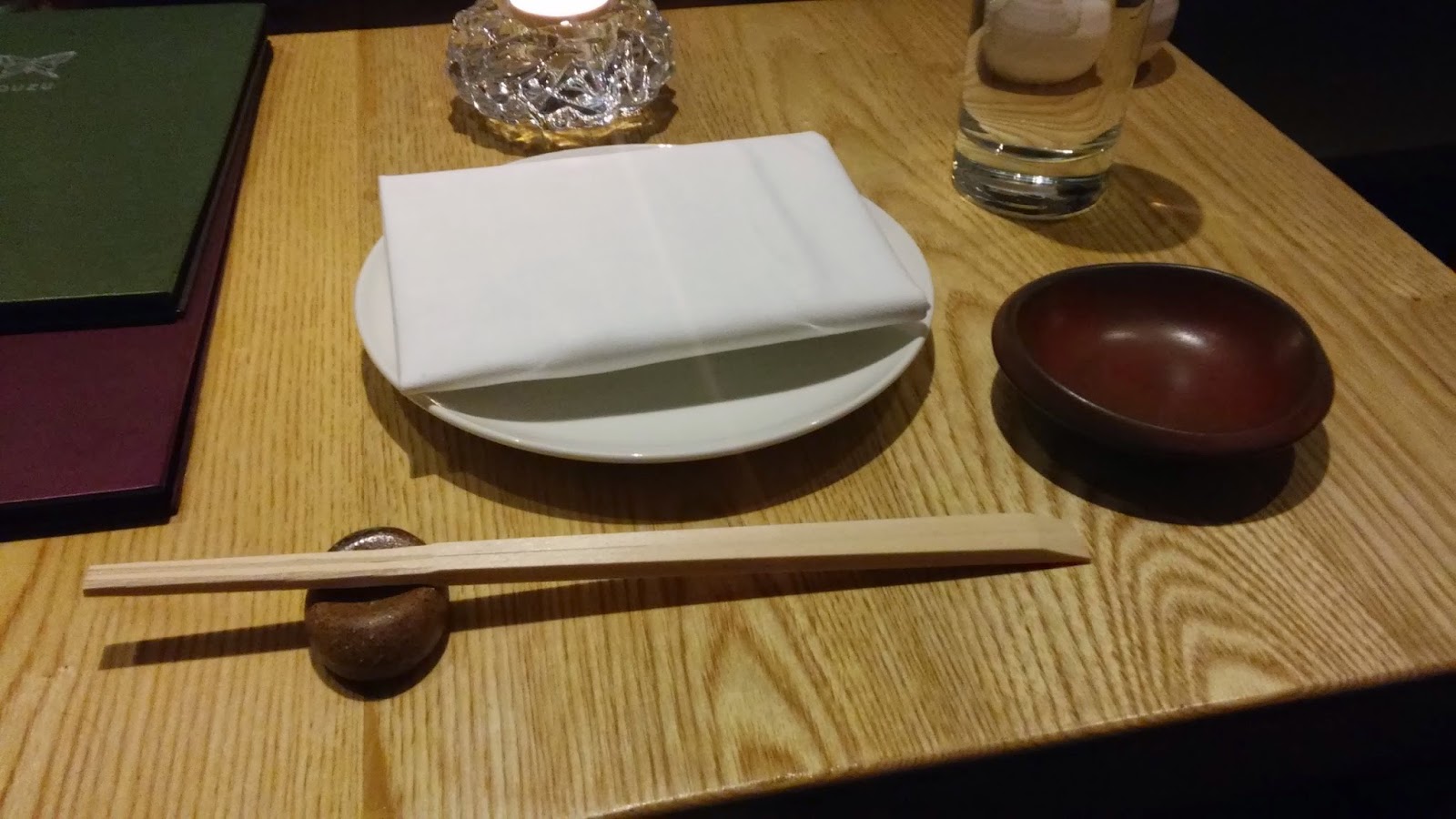 To start we had some sashimi. I had the sea bass with salsa and green pepper sauce, Stephen had the yellowtail with truffle dressing but of course we shared. The truffle in the seabass more like a fragrance than a taste, very delicately done so as not to overpower the fish, giving way to a sweeter taste. I don’t know whethe to attribute that to the shiso, myoga or ponzu! While this dish was perhaps the more exotic I was drawn more to the flavours in mine of lime, micro herbs and pink peppercorns. Both were faultless though. 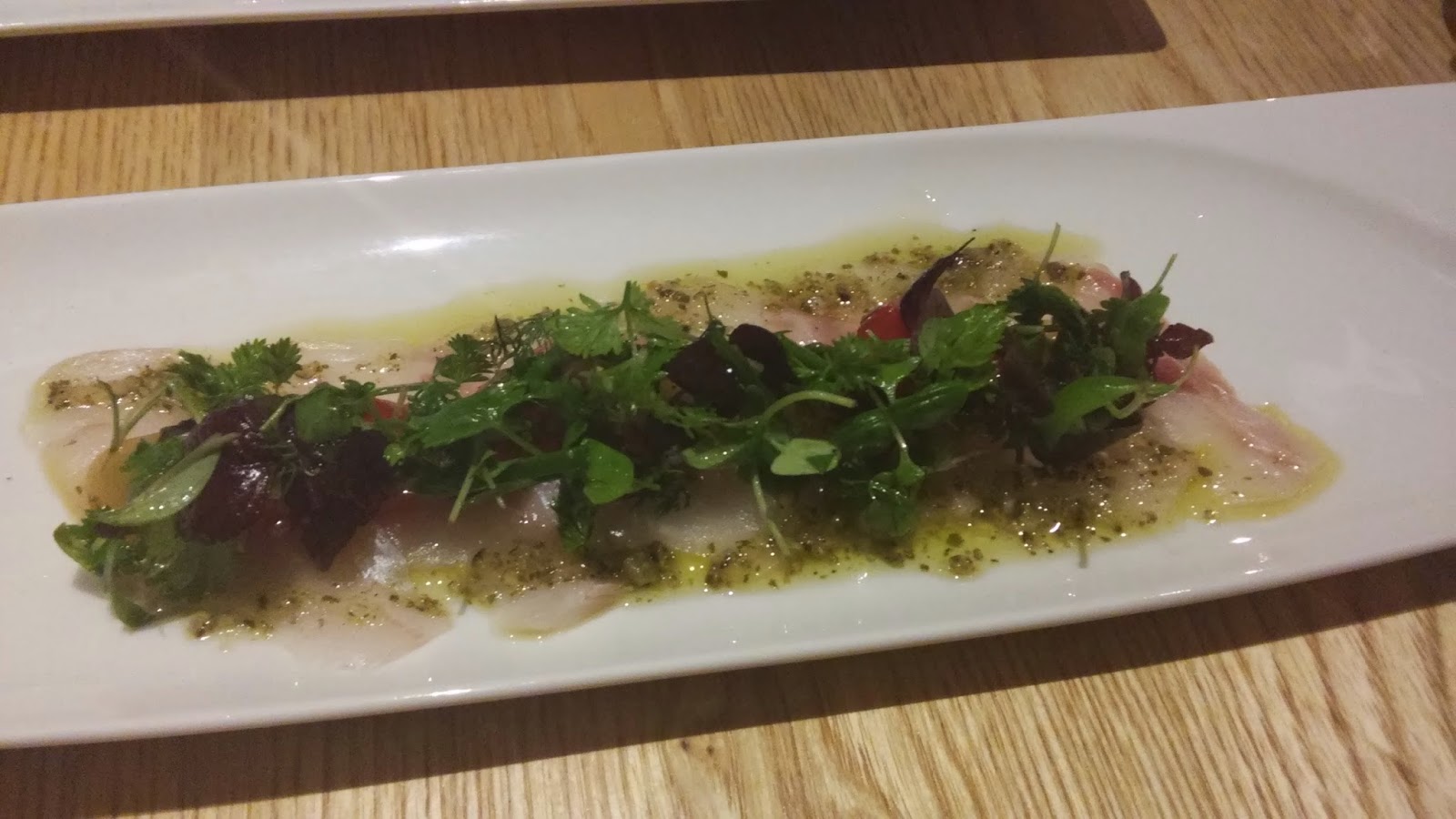 Next up was a choice of sushi roll (we went with crab) and a Nigiri each. We’d been told the Aburi were their speciality, particularly the toro and the sea bass. We had one each. The difference with the aburi compared to nigiri is that the fish on top is seared with a blow torch. It makes all the difference. Our fantastic waitress explained how we should try to eat it ‘upside down’ so that the garnish and fish touched our tongues first. I’ve never had anything quite like it and I shall never forget the way the smokiness filled my mouth. Amazing. 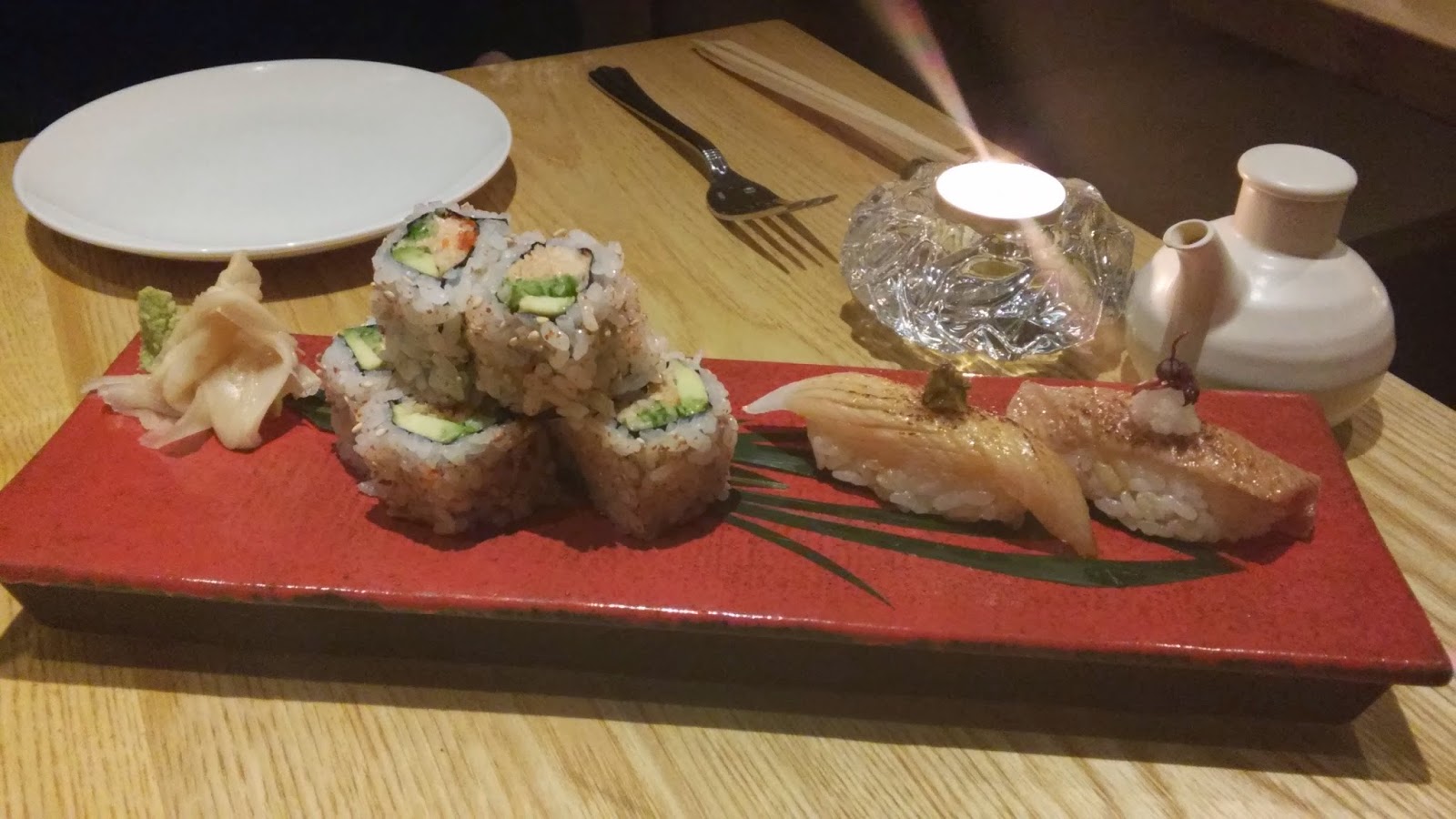 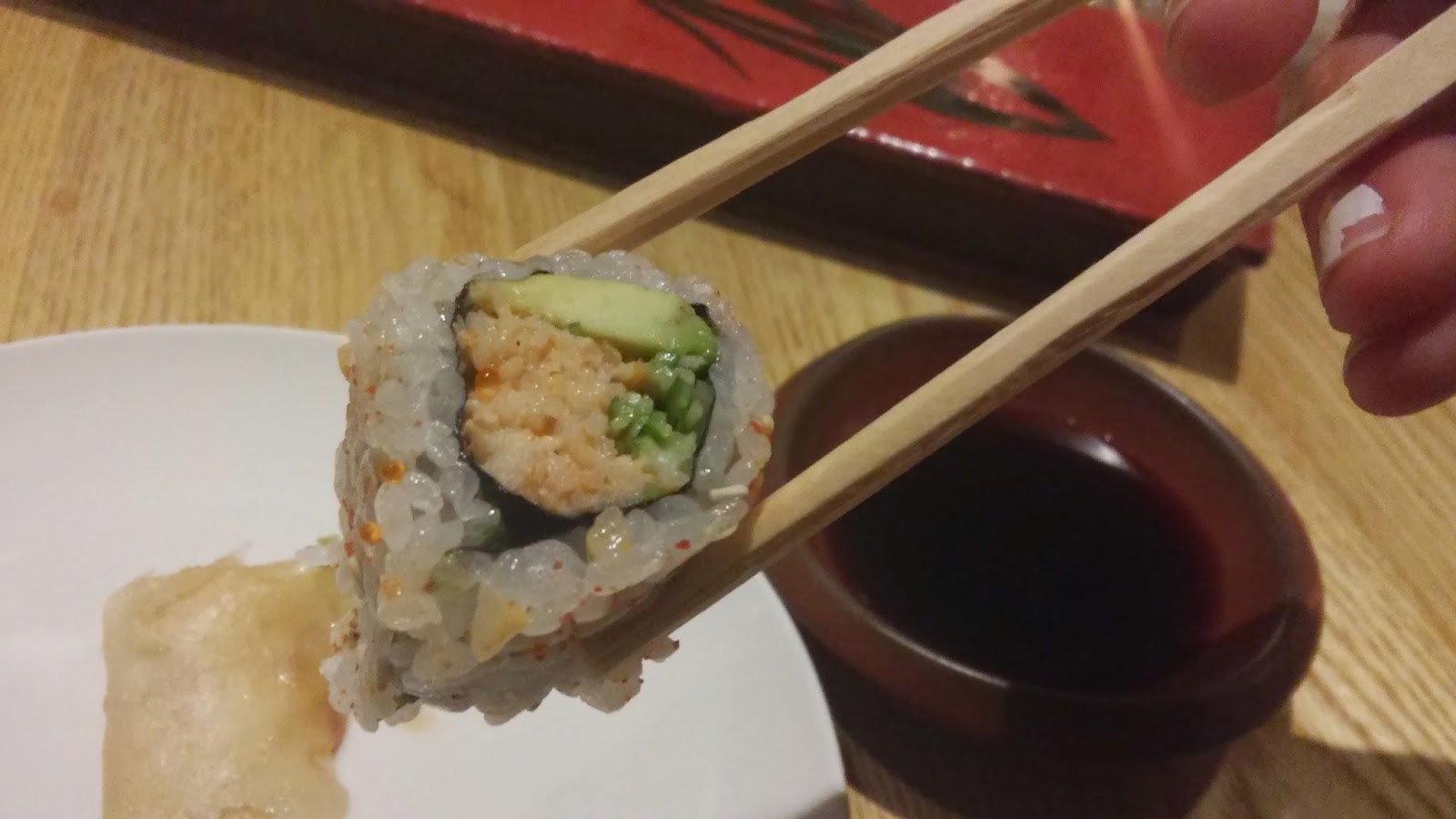 For our mains, Stephen had the miso cod, and I had the duck breast with sansho (though very tempted by the lamp chops). We weren’t sharing but I did have some of Stephen’s fish. It was exquisite. They marinate in miso for three days resulting in a firm, sweet, almost candied fish with the sharper fennel and celery salad setting this off nicely. My duck was a pretty pink covered with a sticky sweet but peppercorn studded sauce. By the end of this I was stuffed but of course I was going to take advantage of trying their desserts. After savoury food this good, I had to see what they’d do with the sweet stuff. 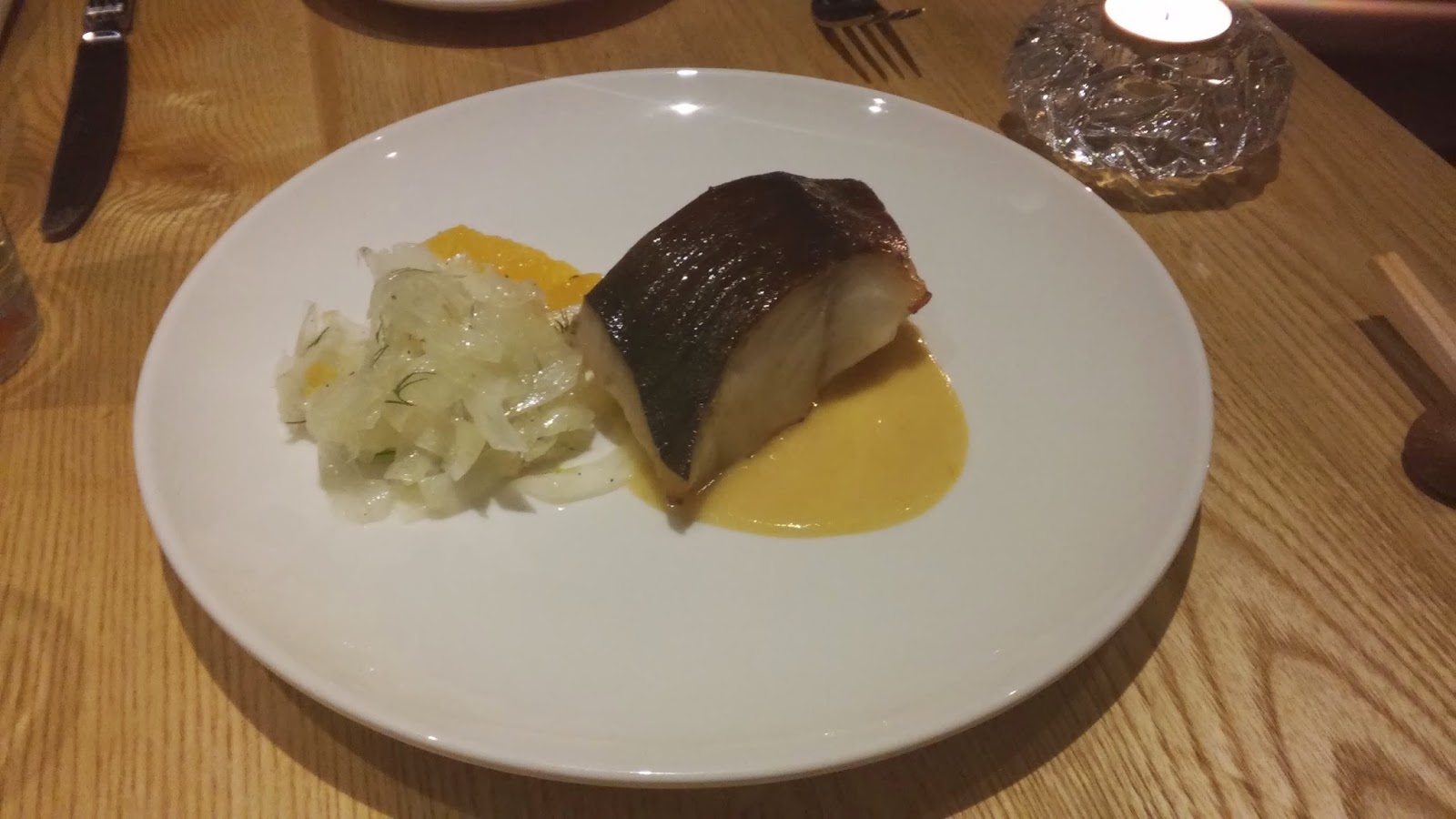 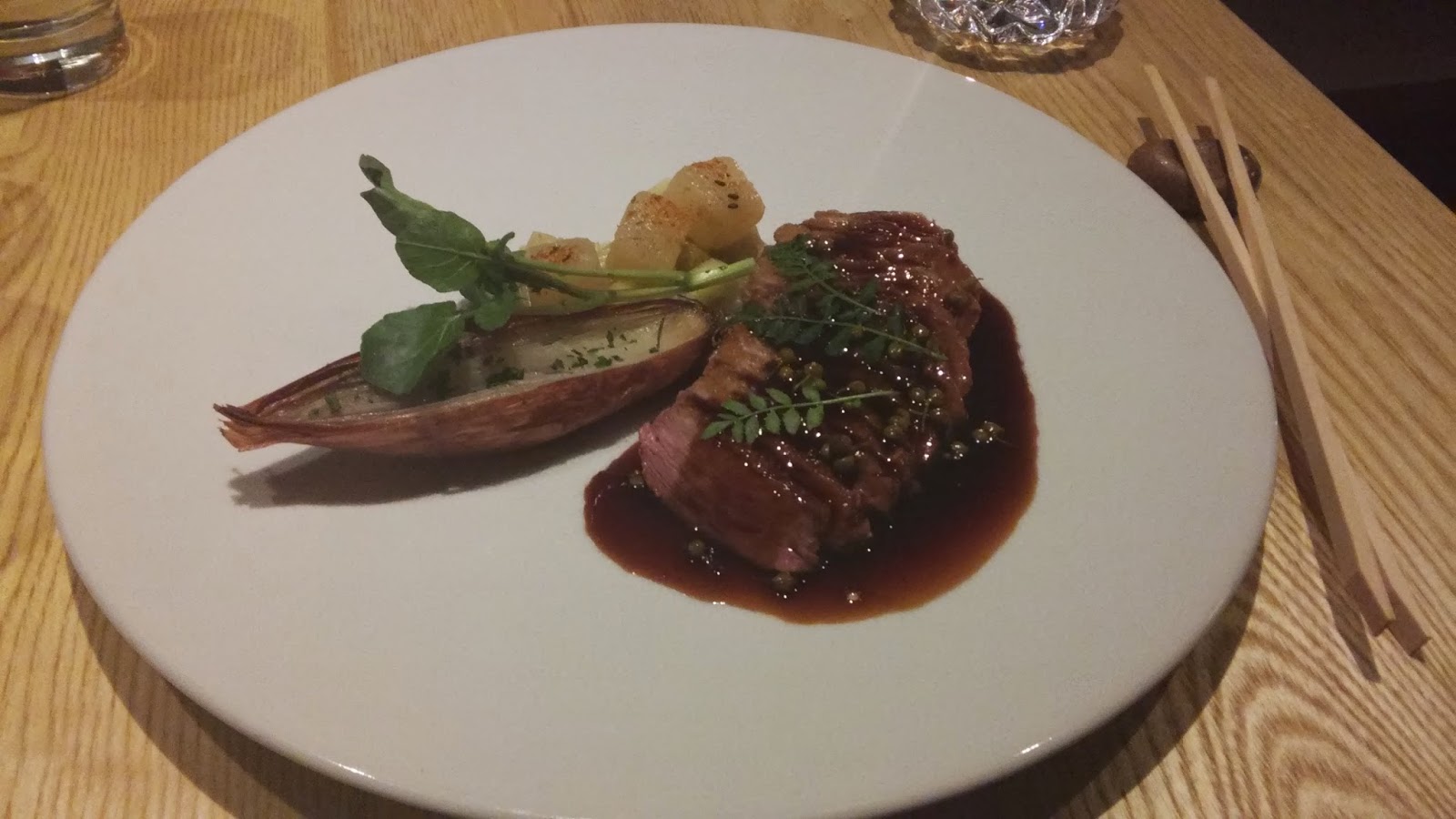 I had their special which was a celebration of sesame. I love sesame’s sweet and nutty taste and it was put to good use here in ice cream, sesame tuiles and tiny madeira-like cakes. It ticked all the boxes without being too heavy.  Likewise Stephen’s chocolate mousse with an amazing hazelnut ice cream. Indulgent but not heavy and with a slice of chewy, candied orange adding a bit of flair. 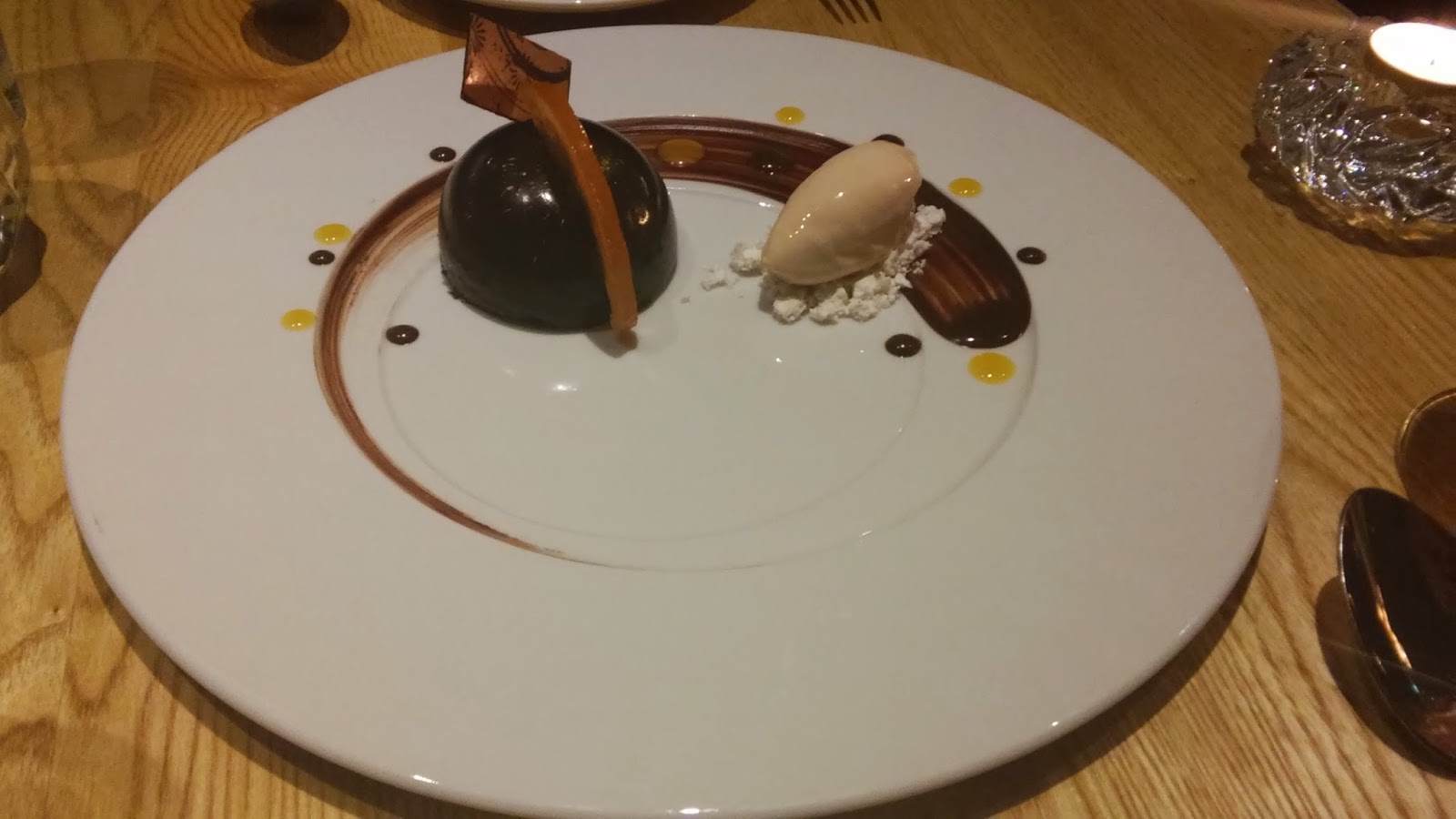 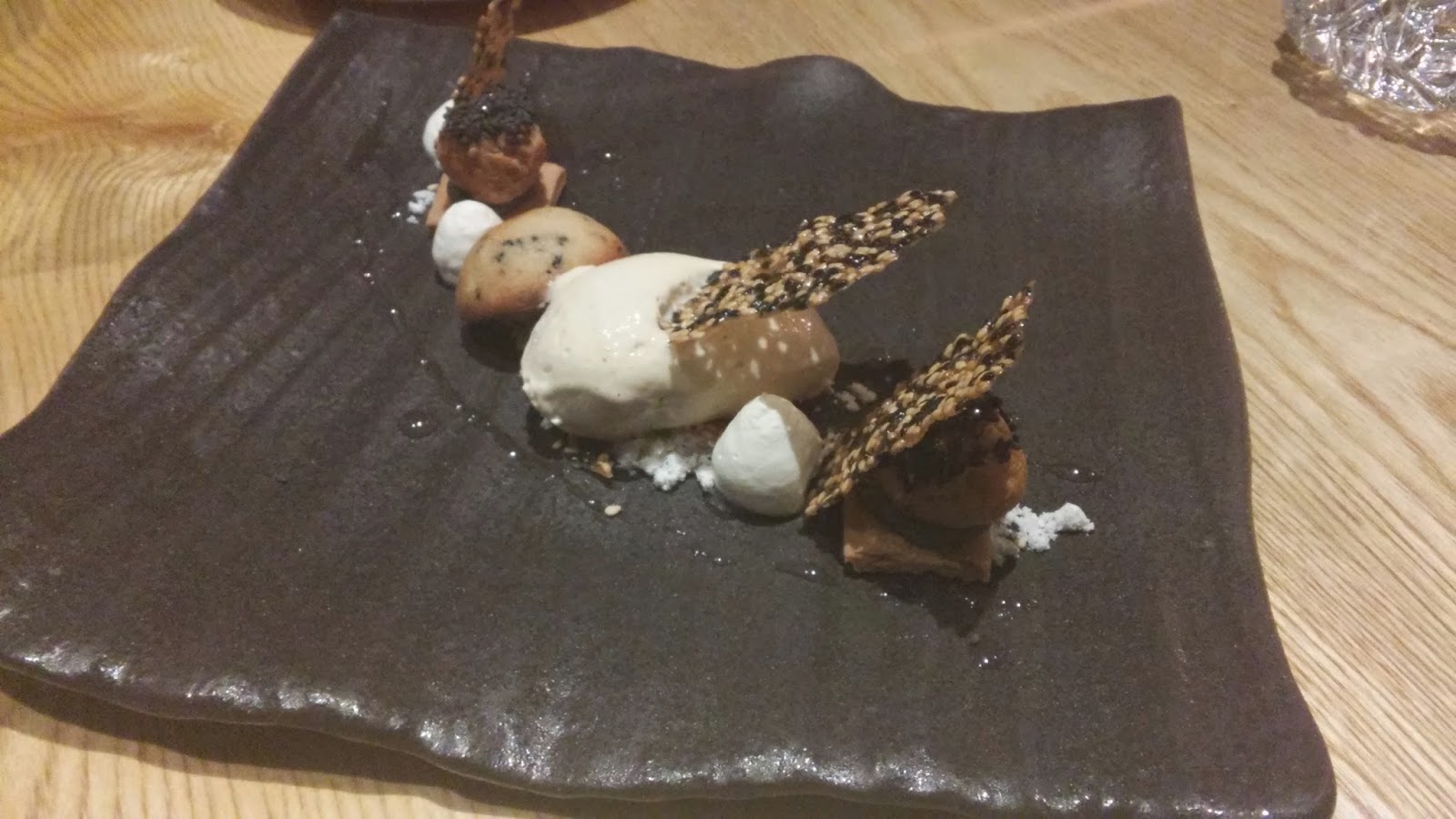 We had a couple of nicely balanced cocktails to accompany our dinner, and we ordered another with our dessert as well. 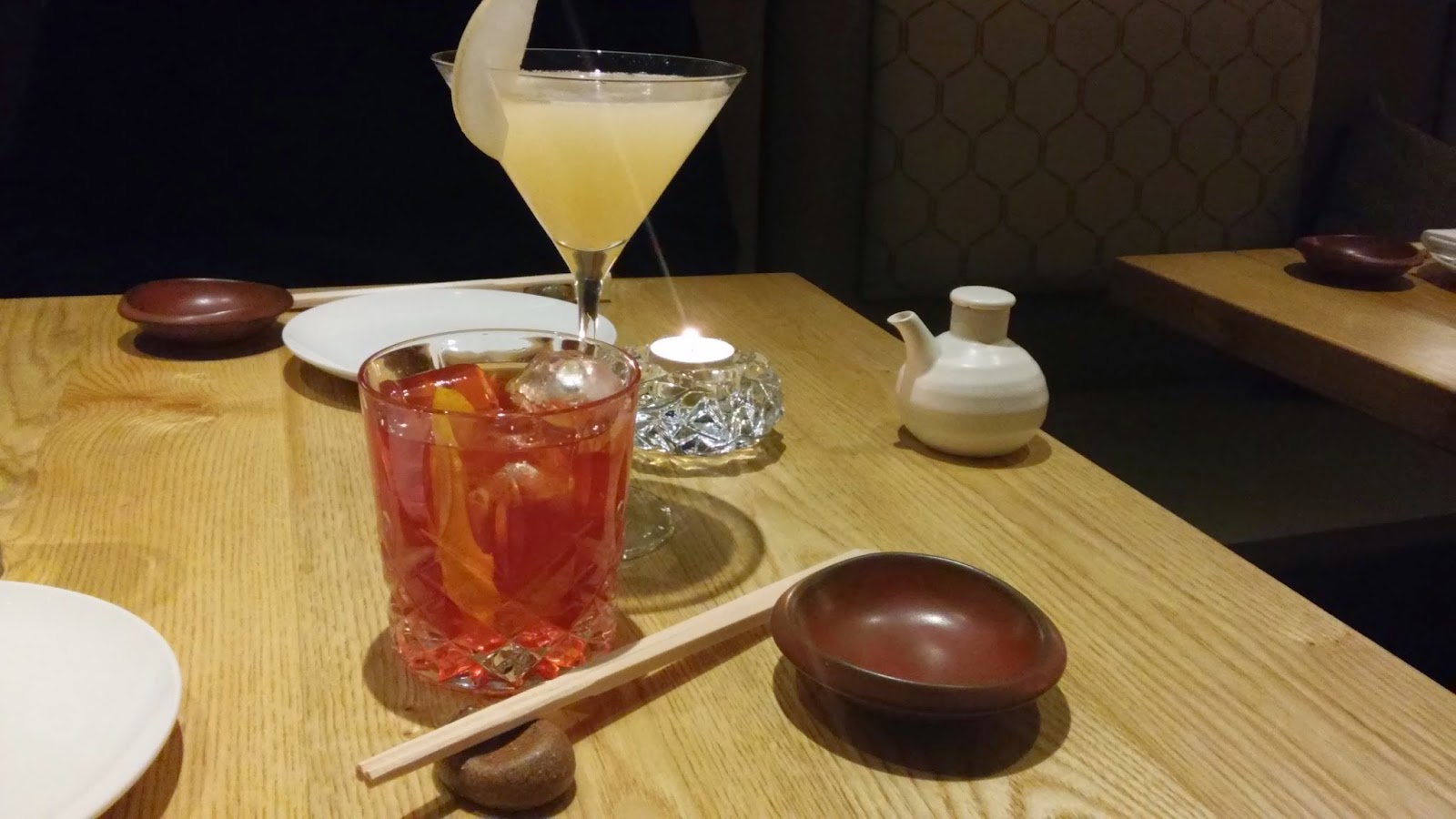 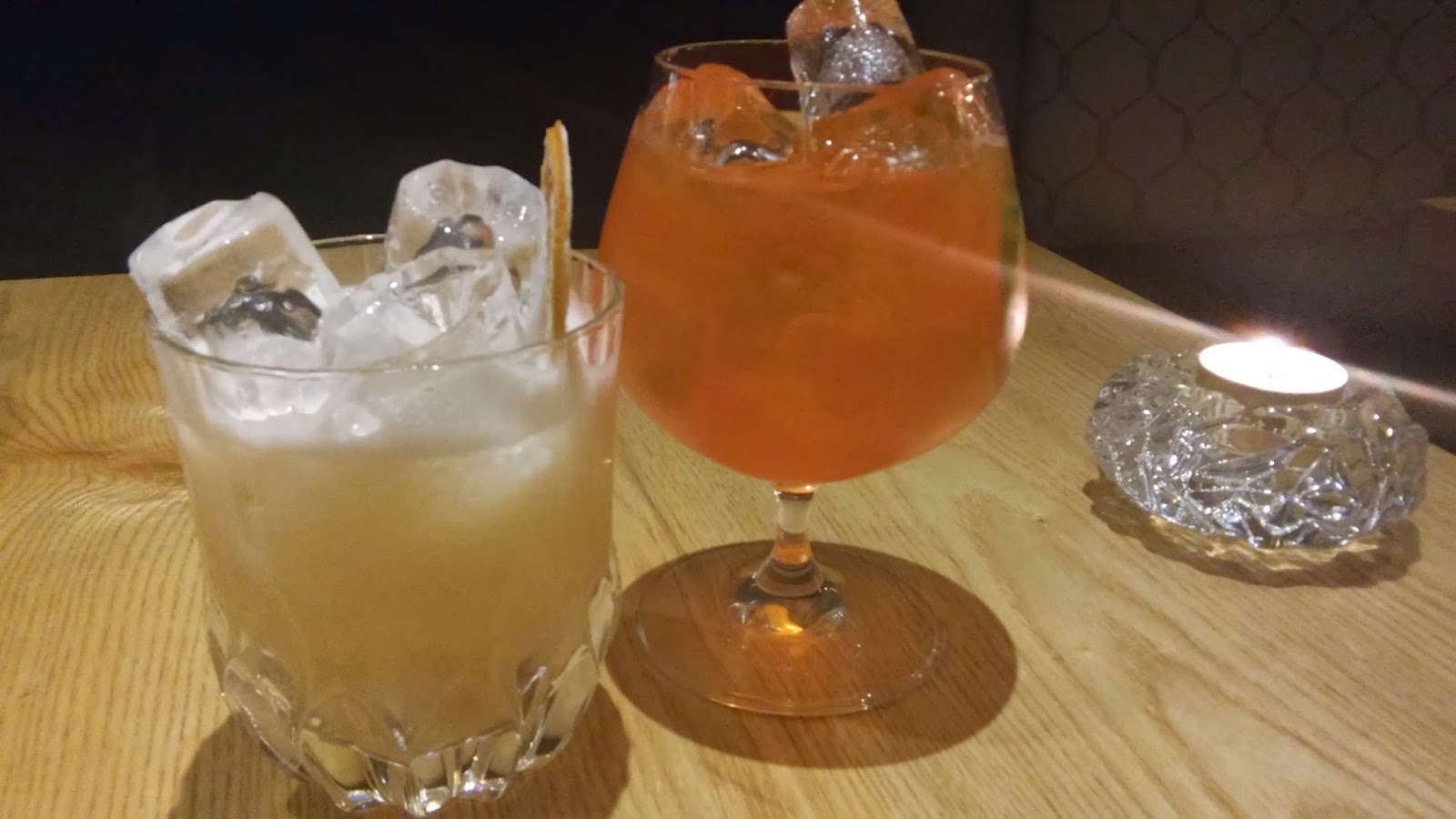 The only bad thing I’d have to say about the place is that they say it’s a ‘sharing’ ethos, which basically means they can bring you the food whenever it’s ready rather than together because it is presumed everyone will tuck in at the same time. Normally this doesn’t bother me too much but Stephen was doing a pescetarian month and I had ordered duck. So his miso cod arrived way before mine and apart from having a couple of bites I had to just sit there and watch him eat. Mine literally didn’t come out until he’d finished and then our roles were reversed. So, just something to bear in mind.


The food was not cheap (the miso cod was £28), but they use quality ingredients and, more  importantly, have some inventive and utterly delicious food. Put this on your list for your next special occasion. Or go along and have a few bites of sushi and sashimi as a light dinner without it breaking the bank.

Posted by Ginglesnuff at 8:16 PM