On occasion me and my friends like to play at being adults by doing the whole 'Come Dine With Me' thing, which is how you must refer to throwing dinner parties since its advent.

It was my friend who lives in Highbury's turn so to give her some time to prep after work, Stephen and I went for an 'aperitif' at Hoxley and Porter which I had been hearing so much about.

I can't remember what was there before, either because it was a pretty forgettable place to begin with or possible because what H & P have done with the place is so stunning it has obliterated any memory of its former guise.

The room is gorgeous - you walk down a long corridor to get in, giving you a chance to admire the dining area and then you basically walk into the set of Murder on the Orient Express crossed with Death on the Nile (without the murders), or at least that is what I was it felt like to me. It was definitely reminiscent of a grand train carriage and the decor and foliage were all very exotic 20-40s. There should have been girls slinking about with cigarettes in holders and if they don't host a 20s night they are missing a trick. 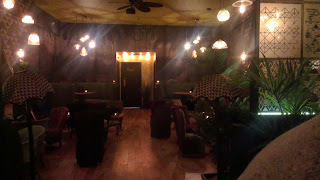 We had a seat by the bar and while Stephen finished his wine, I perused the menu and started to order something rum based with honey and bubbly. The bartender, however, had other ideas, assuring me that they had better cocktails if I wanted bubbles. Well, who am I to argue with the expert? I had a belize bellini which was very nice. Obviously I can't say if it was better than the one I originally wanted, as I didn't have it. 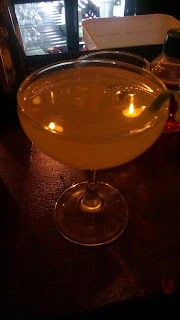 Sitting at the bar totally paid off as we got to chat to the bartender a bit and see what he was creating for the other people at the bar. The couple next to us had an amazing concoction that looked like a trifle in a glass and apparently tasted like boozy cake. And it had red wine in it! Must see if I can try that next time. We were also treated to a sample of their housemade falernum - a lightly spiced lime syrup that reminded Stephen and I of lebkuchen, those German spiced cookies. The combination of flavours tasted better in drink than in biscuit form.

The cocktail menu is short, but they're really happy to make anything off menu if you give them an idea of what you like, including, of course, the classics. For my second cocktail I had an old fashioned, again, at their recommendation. They told me it was made with 'awesomeness' so I couldn't refuse. They make theirs with 12 year old El Dorado rum instead of whiskey and let me try the rum before I agreed to try their kerazy take on the old fashioned. I like rum but I wouldn't pretend to be an aficionado. However, it was definitely quite a sweet rum and it definitely had notes of coffee. It is so naturally sweet in fact, that H & P only use half a teaspoon of white sugar (not the more intense darker stuff). I could have easily sipped it neat. 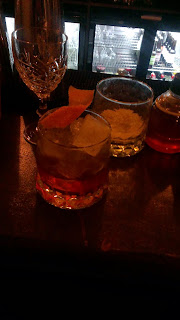 Stephen went for the Baron's Tipple which was a fruity little number of overproof rum, lime, apricot jam and guava juice. You might think all this fruitiness would leave you with an overly sweet cocktail but it wasn't at all. It didn't exactly wow us either, but it was still pleasantly sippable. 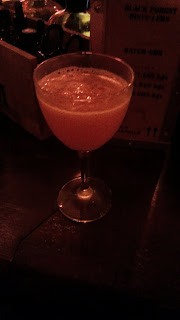 Even if I hadn't liked the cocktails I think I would be tempted to go back simply for the setting, but the fact that the staff were ever so friendly and that the cocktails were made with care and attention means a second trip has already been lined up for a few weeks' time. I might sample the food they have on offer next time as well - both bar menu and a la carte had some very tasty-sounding options!

Posted by Ginglesnuff at 4:23 PM