Since running my Meetup group for Alternative Nightlife, lots of my friends give me suggestions for things we might like to do. One of these was to go to the Amersham Arms on a Sunday for 'Ukebox'. The premise is simple - you are given a list of songs, you choose the one you want, shout it out and the Brockley Ukulele Group plays them - on their ukuleles. Like a living, ukulele jukebox (hence the name).

It sounded like it could be a laugh and a good way to banish the Sunday blues and it turned out to be even better at doing this than any of us had imagined. 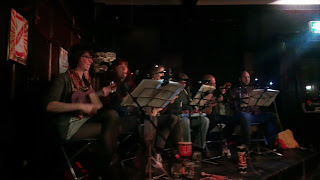 One of the girls from the group came into the pub to hand out the songsheet 'menu' beforehand so you could get an idea of what to request once you went into the back room. And it functioned pretty much as described, except that I had expected purely instrumental versions of the songs and in fact, they sang them all, and sang them very well! I say 'sang'; some of the songs on offer included things like Gangsta's Paradise which requires a certain level of rapping skill. This was left to Alfred to attempt and he pulled it off with aplomb. In fact, the more modern 'urban' songs were the most entertaining as it gave the Brockley group carte blanche to ham it up a little bit and bring some humour into the proceedings, (by giving each gangsta phrase a plummy English overture for example), rather than just a straight reimagining for the ukulele. 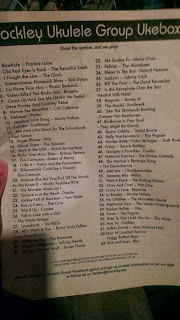 I quite enjoyed the audience participation of shouting out the requests as well. At the start there was the usual British reserve and hesitation, but as time ticked by you realised you had to pipe up if you wanted to hear your desired song as people were getting very quick off the mark to shout a request as soon as a song was over. At several points, song numbers were called out almost simultaneously and the group had a bit of a backlog to work through in order.

Every now and then they would take a break from the jukebox element and play 'one of their own' which meant a song they had been working on that wasn't on the list. They performed In the Backseat by Arcade Fire, for example, which was sung absolutely beautifully by Liz. People were so rapt for this stripped back version you could have heard a pin drop.

Honestly, this was such a fun evening - we all delighted in hearing how they would interpret each of the songs for the ukulele and they never disappointed. Gangsta's Paradise and Hey Ya! were definitely worthy of a mention, and I was extra pleased they did Me Gustas Tu, a song I've loved since I lived in France. I was really impressed by the range of their repertoire, taking in TV theme tunes (Rawhide - my request), pop (Baby One More Time), indie (Debaser) and everything in between. They also have a few 'mashups', like the Supergrass/David Bowie one combining Pumping on Your Stereo and Rebel Rebel, that work really well. And even though ukuleles are the main instrument, they had several additional instruments for special sound effects that added another playful dimension (take a listen to an excerpt from Sh'Boom below).


There were 60-odd songs to choose from and we probably got through about half of them in the two and a half hours that the Brockley Uke Group were playing. And if that were not enough, you are invited to write suggestions for future songs on the back. I didn't have a pen or pencil with me so if I may assume they're reading this, may I be so bold as to suggest Enter Sandman by Metallica?

It was a rollicking good evening! And I believe I haven't even mentioned that it was free! You couldn't ask for more really. We all had massive smiles on our faces listening to each song and my group were all agreed that we're likely to return. Listen to an excerpt of 'Sh'boom' below.

Being a Sunday, the Amersham was 'quiet' (there was only one other couple there who weren't watching the Ukebox) so it's hard to get an idea of what it's like on a normal pub day, but they have lots going on and are in cahoots with the Lock Tavern so I can imagine it's quite a good pub to frequent if you're in the area, often putting on offbeat acts and live music.

Posted by Ginglesnuff at 3:00 PM