There seems to be no stopping Street Feast and Tweat Up. After their very successful stint at Merchant's Yard on Fridays with the Tweat Up extravanganzas on the Saturdays (I went to the amazing Taco Wars), they have teamed up again for Truck Stop.

This time any street food vendor who wants to serve food has to have some kind of truck or van to serve from. Each van has a history which is fondly recalled on the website, and they are all currently parked up at Wood Wharf, and then will be back again the first Thursday and Friday of September. 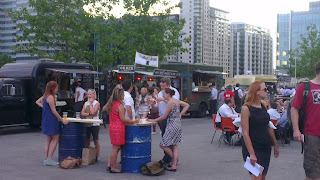 It's a fantastic site, quite sprawling. With about 20 trucks, you need a lot of space. There are long tables set up in the middle of the vans, higher tables to congregate around if you don't need to sit, and then masses and masses of green space to plop down on. Despite the amazing heat yesterday, or perhaps because of it (have to assume they were using sprinklers) the grass was sodden. For some reason that didn't stop us sitting on it though, next to the water, listening to The Trouble Notes entertain.

A few bars dotted around helped people to work up and maintain an appetite. If you booked in advance you got ten 'Truckstop dollars' to spend at the bar. Tickets were £10 either way so buying in advance was a no-brainer. Unfortunately, you couldn't get any change from the 'dollars' so if you didn't work it out right you sort of lost out. Fortunately, most things were multiples of five so it was easy to buy wisely. I got myself a Rotary Maragarita after enjoying the one I had at Taco Wars so much. They definitely pack a punch. 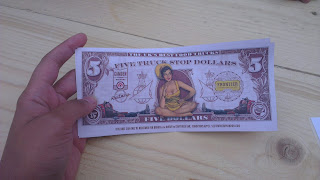 There was too much food to even seriously attempt trying, but luckily there were only a few food vendors I hadn't tried before so I was able to hone in on those. Had I realised that the BBQ at the back was open to all rather than just those doing the keg party, my choices might not have been so easy. I can feel a second visit coming on to rectify that...

But anyway, what I DID have was thus:

After a circuit I decided my first dish would be from Mother Clucker who I had heard so much about. The question was, chicken bites or chicken sandwich. I let my heart rule my head and went for the sandwich, complete with hot sauce and pickled peppers. It was a mistake. The chicken was lovely. More breaded than crispy battered, it tasted peppery and was nice and tender. The pickled peppers too were great, and a welcome topping. But there was too much bread and not enough sauce for the whole thing. I had taken a gamble and I had lost. 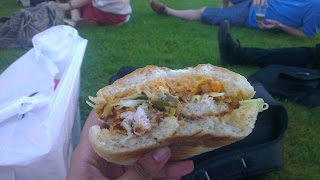 I quickly followed this up with what turned out to be my favourite dish - arancini balls from Cheeky Italian. Three massive balls of arancini in a cup or in a wrap (I went without the bread this time), they were courgette and mint flavoured with buffalo mozzarella in the middle. Fantastic. Admittedly, I wouldn't have been able to pick out the courgette flavour without being told, but the mint shouted out whenever you had a bite. And the gooey mozzarella oozed out at every bite too. I had a little tomato sauce accompaniment, but they didn't need it. 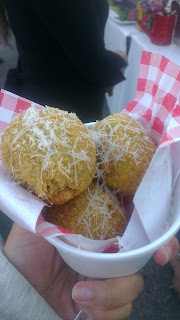 After another drink and a little rest I had dessert - doughnuts from Fishdog. These were more like churros in their form, but very chunky churros at that, and came with a salted caramel dipping sauce. The doughnuts were warm and very sugary and you got a pretty decent portion. That caramel sauce though.... oof. I would have happily just had a pot of that and a spoon, forget the doughnuts! 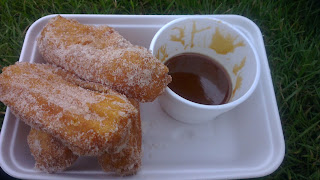 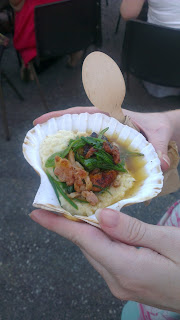 After those I was feeling pretty full so didn't end up having anything else. Had I still felt hungry, I would have braved the queue for the scallops at Healthy Yummies. If you had seen how much butter those scallops were cooking in, you might raise an eyebrow at the use of 'healthy' but they certainly looked yummy, served in their shell with celeriac puree, bacon and seashore vegetables. I'll keep an eye out for them in future.

We all continued sitting on the grass well into the evening, with the music floating around us, marvelling at the weather. It was what summer evenings were made for. Street Feast and Tweat Up are aficionados of fostering a brilliant, friendly atmosphere and they had done it again. Everyone I took with me was impressed and at least two were going back tonight!

As soon as I got home and looked at Twitter, I was reminded of the chillibacks which I had promised myself I would try and then forgot about later. I also didn't spot the 'secret' gin store. Did anyone else see it? I can only assume it was near the BBQ, an area I didn't explore at all.Yet more reasons to return next month.
Posted by Ginglesnuff at 4:41 PM