So, Thursday was my birthday and my boyfriend came up with an amazing day for me, which chiefly consisted of doing things on my List! First up, after a deliciously massive sausage sandwich for breakfast (not a euphemism) was a Duck Tour.

Stephen had done especially well with this, as only the other day (but after he had booked it) we spotted one in London and I reaffirmed to him how much I wanted to give it a try.

The London Duck tours are an alternative way of doing a sightseeing tour of London. You board an amphibious vehicle (ours was Elizabeth) to drive around some of the London streets and then after about half an hour of that the 'bus' goes straight into the Thames, with only a change of driver to mark the transition from road to waves. 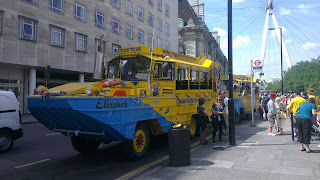 These 'boats' are fun enough to be on anyway, but it's even cooler when you think about their origin - they were used to transport soldiers over for D-Day - and picture what it would have been liked in their original guise. They're now painted bright yellow and are much more cheerful and comfortable than they would have been during wartime. There are seats, for example.

I had sort of forgotten that it was a tour, focused as I was on the bit where you seamlessly go from land to water. But it is a tour and therefore there is a tour guide. The guy we had was a rather cheeky, tattooed chappie who reminded us of Alex Zane both in terms of looks and patter. As it turned 1 o'clock and we prepared to start, we were treated to him singing the Rocky theme and then a countdown to the start of the tour as the lights went green. We went around the streets of Westminster while our guide fed us tidbits of information about the buildings and area we were passing, and also incorporating some truly awful jokes. (What do you call an exploding monkey? A ba-boom! *Groan* ) 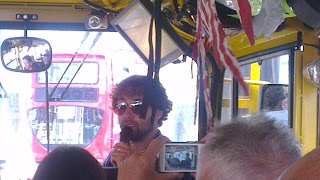 Some of the bytes of information held a tenuous grip on reality (one building was pointed out as being Hogwarts) but there were quite a few other interesting things of note that I hadn't heard of about London before. He focused quite a bit on the Houses of Parliament as we went by, pointing out that the monarch is only allowed in the House of Lords - the last time one went into the House of Commons, he ended up dead. And we all got to grumble at the number of bars (19) there are, and how cheap the pints are (something like £1.60). He also told us all the rhymes about the Lions on the banks of the Thames which are purportedly there to monitor the river levels. It's said that 'if the lions drink, London will sink'. One of my favourite pieces of information was that Florence Nightingale introduce the 'no drinking' in surgery rule for all her nurses. Amazing what wasn't considered common sense back then. And we also went past the Archbishop of Canterbury's house - Lambeth Palace, which I had never even noticed before.

Stephen and I were probably the only non-tourists on board, and there were a few families as well who were well catered for as we were all encouraged to 'Quack'  and flap our wings at other Duck boats we come across or gawping tourists we passed (the Duck boats attract a lot of attention). The children took to this with aplomb as you can imagine, but even some of the adults (ok, maybe me once or twice) joined in and flapped their arms. 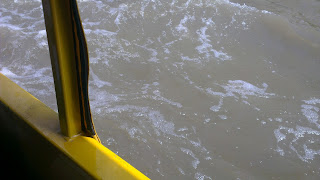 And of course, there was the bit I had most highly anticipated - driving straight into the water. This is quite an odd but fun transition as on the road you're quite high up yet when you go into the water, the boat sinks pretty far in. The pictures probably don't convey how close you feel to the water. With no stretching you would have been able to submerge your hand (the water being a very murky brown, I felt no such urge). You also go from driving around London at a normal speed to crawling along the Thames at a snail's pace. The water was a little choppy - especially when a barge went by dragging containers and created lots of waves and breaks in the water. I sat next to the open space that acts as a window and got quite splashed. It felt like an essential part of the experience. You spend about another half an hour on the water before going back to the original embarking point.

I really enjoyed my duck tour, and the novelty of being on both land and sea. I think this is a great way to see London - a fun alternative to the hop on/hop off buses with the added bonus of giving our military vehicles a new lease of life. I do hate things going to waste.

Anyone else been? Or are there any other different tours I should add to the List?
Posted by Ginglesnuff at 1:26 PM