I FINALLY got to Dead Dolls House, the new venture by the people behind Dead Dolls Club last Friday night. Every time I made plans to get there, something would crop up to divert me. But I am glad I got there in the end as it is absolutely lovely.

We made it out of the house at about 8:30 and Shoreditch was absolutely heaving. Everyone already seemed wasted. But Stephen and I only really wanted a quiet drink as we had an all-day event on the Saturday so we didn't want to be hungover.

Luckily, Dead Dolls House is a members' bar of sorts. In the first couple of weeks before it opened you could become a member simply by registering your interest (as I did). But if you missed this window then membership is still free - they just request you bring them a gift to make them smile, or add to the beauty of the House. Being a members' bar of course means that you're already going to get a reduced amount of traffic as they don't just let anyone in. Even if they did, unless you already knew the place was there, you never would guess from the outside. To enter you have to ring the doorbell and then the sartorially fabulous doorman will let you in and check whether you have a card already, or need to collect one. If you haven't been before, he'll give you the lowdown on what's on what floor. 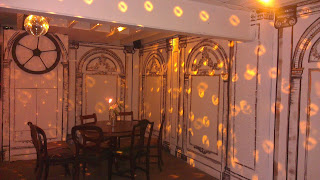 We immediately went to explore a little. The whole place is decorated in the same style as the Dolls Club - absolutely gorgeous stencilling on the walls and pretty lights (see above). The ground floor has a bar and some seating for drinking or eating. Upstairs is the 'dining room' which was empty on this occasion, clearly everyone was more interested in drinking than eating. One floor above this was another bar and then at the very top was a 'bloomin marvellous' roof terrace 'shod' with astroturf and on which blankets (provided) could be unfurled for some al fresco drinking. It was lovely up there, looking down on the revellers who probably had no notion you were up there. 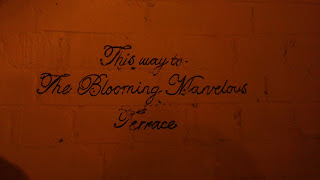 Stephen and I got a couple of drinks from the upstairs bar from the specials board. I had the Baroness - gin, cointreau, peach and lemon. Stephen had the Madame Rose which featured lillet blanc and rose liqueur. We then tried to pay by card but the bartender didn't have a reader upstairs so we had to open a tab. Paying by card was not their strong suit, as when I then tried to add on to our tab later, I was sent upstairs to retrieve it. Then, once I'd ordered, downstairs, the girl had to do some 'ballet' with the card reader to actually get a signal and debit my card. She cheerily complained that they didn't have their own wifi and 'can you imagine what it's like when it's really busy' but it seemed she said this with gritted teeth. 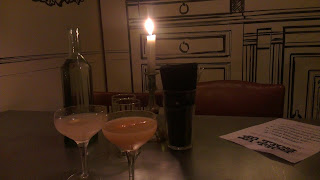 Stephen and I went for the rum-based cocktail with creme de cacao and maraschino, which apparently hardly ever gets ordered. The girl behind the bar had never had to make it herself before. But she did a very fine job and I thought it was very tasty, probably my favourite of the night - people, get it on your lists.

Dead Dolls House is very gin-centric, which might be why a rum cockrail gets overlooked. As well as the special cocktails they have a page devoted to the different gins they stock, which they will pair with the tonic of your choice and garnish according to the type of gin you have ordered. (I.e., orange peel might go better, or a sprig of rosemary, with lime.)

We had three drinks in total, which means we sampled almost all of the specials. My last  was a beer cocktail combing kraken (rum again - I love it) and amaretto, ginger and lime. Stephen had the Admiral Bloom (gin, cointreau, lime, strawberries). 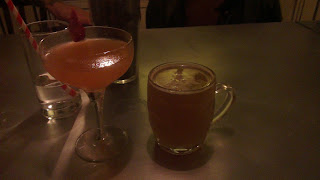 We both very much enjoyed the couple of hours we were in there. It was just what we wanted. I understand it tends to be livelier and there seemed to be enough space to handle a lot more people than were in on the night without it being uncomfortable. We still managed to meet one colourful character who we ended up chatting to - he was into the whole jive/lindy-hop scene and was persuading us to get some lessons and get involved. Then we all went outside to marvel at his bike, which can only be described as bitchin'. 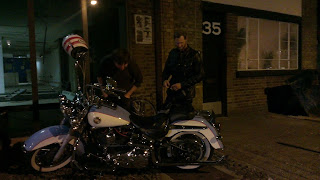 I will definitely be making the Dead Dolls House a local of sorts, it's shaping up to be the area's hottest 'secret'. Each week they have a different pop-up street food trader in the house, as they do at Dead Dolls Club, so there's always a reason to return if you're more interested in food than drink. We didn't end up getting any food - my cocktail did enough to conquer my appetite but the lobster rolls from Roll Up Roll Up that other people were getting looked delicious.
Posted by Ginglesnuff at 1:30 PM