Chinese is arguably my boyfriend’s favourite cuisine, but, while I enjoyed the odd chow mein or spring roll, it wasn’t something that I routinely craved. Discovering the regional cuisine of Sichuan, Hunan and, now, XinJiang has rather changed that.

While they’re all, obviously, different regions, they do have similarities in their liberal use of hot peppers and offally ingredients. Ba Shan is an excellent example of this and Silk Road, where I went on Wednesday, is another.

There’s at least a handful or reviews and blog posts about this place and I must admit I’m not really adding anything new to the canon. Silk Road is cheap, delicious, and a pain to get to. More of a café than a restaurant, we remembered to book a few days before we planned to go and as we heard them turning people away, saying there was a one hour wait, we realised it had been essential. From just after we arrived the place was full and stayed that way all night. On a Wednesday! In the depths of Camberwell!

I had heard that the menu was quite short but it was still long enough for it to take us quite some time to decide on which dishes to choose. They all sounded pretty good and we didn’t want to waste our long trip down (and back) by ordering something sub-par.

There were four of us and we went for the following:
The pork and celery dumplings came first. You get ten for £3.00 and each dumpling was very generously filled. They were great, slightly chewy dough with juicy pork and finely shredded celery inside. It’s not a combination I’d had before but it really worked, with the celery adding a lightness and freshness to the dumplings. 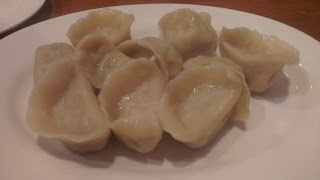 Shortly after the double cooked pork arrived – thin slices of it thoroughly coated in a sweet, hot sauce with liberal red and green chillies. That sauce was fantastic – the first bite had quite a kick to it but it was manageable if you didn't eat too many of the fresh chillies at once. The pork was soft and each bit had a bit of naughty fat on its edge. 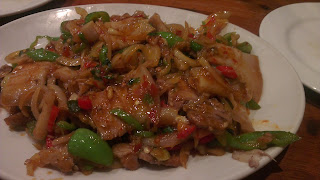 I worried that they might bring my least anticipated dish at the end – the tripe, but luckily, it came out as we were halfway through the pork. It didn’t look that appetising – the onions and tripe were pale and drab with the fresh green chillies the only vibrant and inviting thing on the plate. We all had a tentative bite and pronounced it – OK! The tripe was soft, the texture not unpleasant, and, to be honest, didn’t have much of a taste. It was inoffensive. We had a few forkfuls each and then eagerly went back to finish off the pork. 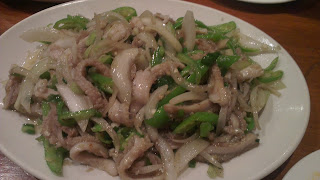 Then the skewers arrived. From my reading I knew not to let these sit on the table for too long and quickly grabbed my two skewers. Each skewer had about 6 little morsels of crispy, fatty lamb dusted with cumin (I think). They were amazing. My favourite dish up until that point. 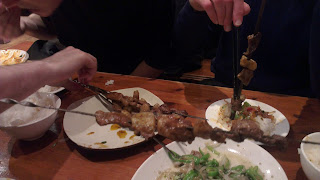 The piece de resistance was, of course, the big plate chicken. A massive bowl was brought to the table full of a steaming brown sauce, star anise scents emanating from it. There were the requisite chillies floating about – fresh green ones and those dried red chillies that must have been soaking in the broth for so long they had rehydrated. There were large chunks of potato and of course the chicken pieces on the bone. 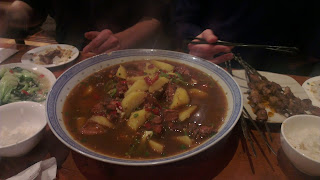 We scooped out several pieces of chicken and potato into little bowls, with a bit of the broth and all marvelled at the taste. I have never tasted chicken like it. It didn’t even look like chicken – it looked like barbequed pork. It was so dark, so fully had it absorbed the flavours from the soup. They must marinate the hell out of that chicken. The broth had a very savoury taste to it that was incredibly more-ish. But this was also where the heat lay and it was easy to forget this when you were spooning it out. There were sniffles all round.

We’d only taken a little out of the pot when the handful of noodles (the largest noodles I’ve ever seen) were dumped into the plate. I’d thought this happened when you’d completely depleted the dish of meat and potatoes, but no matter. 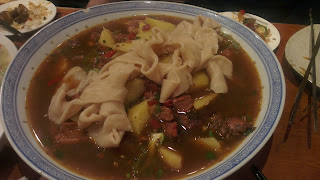 Such was the size and length of them, one portion worked out to about two noodles each. Now, I like noodles, but normally I’m more of a fan of the thinner, glass or rice noodles. These were thick, but flat, and meaty, chewy. Slightly sweet. I loved them.

Our feast started to defeat us and we weren’t able to completely finish our big plate, though we did dredge the bowl for the last pieces of chicken. I finished off my share of the rice by adding lots and lots of the soup to create a savoury rice pudding, which in my humble opinion was a fantastic creation. 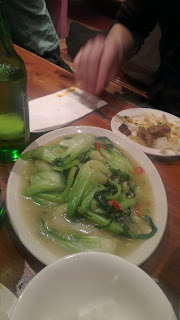 By this point, I’d ingested so many chillies I think I was beginning to feel a bit spacey. You don’t even really notice it at first but that burn slowly builds. Our very garlicky bak choi provided some relief from the heat, but I kept dipping mine in the soup thus defeating its cooling qualities.

We paid our bill – a princely £15 each (including tip) and departed.

Why, oh why does it have to be in Camberwell?! I’m jonesing for those lamb skewers even now, and sooo want to try the other dishes I’d heard were good – the home style aubergine and cabbage, the fried dumplings. One day I’ll venture there again.
One day.