You have your first one, and if you’re completely honest with yourself, you think, “is this it?” And then the next one comes along and it still hasn’t touched the sides. But then, eight later and you’re stuffed beyond belief and can’t quite figure out how that happened. At least, this should be the case when eating a multicourse meal if the chefs have done things right.

I’m happy to report that this is just how things panned out when we had our eight-course meal at the Two Hungry Girls' supperclub last Friday.

They normally do a monthly supperclub and you book yourself or you and a friend in and then turn up to eat in close quarters with a bunch of strangers. We did things a little differently by asking Leigh and Shu to hold a private event for Stephen’s birthday. Just us and 17 of our closest friends, squeezed into their living room. As we all turned up on time and bustled into the house I worried it felt like we were taking over slightly, and I do hope we weren’t too boisterous. I think we might have been the largest group they have cooked for and, arriving at the same time as we did, it did feel like we were descending upon them somewhat.

However, they handled us with aplomb and the evening was a convivial success. I popped to the loo about halfway through and was struck by how much it sounded like the next room was a bustling restaurant, only filled with all our friends. It was a lovely thought.

The food was fabulous. There wasn’t a single dish I didn’t thoroughly enjoy and everyone else felt the same. Apart from being the Two Hungry Girls, I think they could easily have the moniker the Two Lovely Girls – they were delightful hosts, talking us through the menu and answering any questions we might have about ingredients, or just their supperclub in general. They started in April doing it as a one-off fundraiser but it was so successful they started doing it on a monthly basis as well and I heard about it through another fundraiser they did recently as reviewed by The London Foodie. Beforehand they were also really friendly, giving us tips on local pubs to enjoy before or after, and wine pairing suggestions.

Our feast began with a welcome drink – a lychee bellini. You can’t really ever go wrong with bellinis and lychee was a particularly agreeable flavour to go for. We then started with silken tofu in century egg sauce with black sesame. I was a little wary of this dish, having heard of the century egg before – I’m pretty sure I’ve read of it as part of "world’s worst delicacies" or something like that. It’s basically, traditionally, an egg that has been left to preserve for so long, it goes green and jellified. Sounds grim. But, as a sauce at least, it was nothing of the sort.The tofu was soft, a bit like eating mozzarella, the sauce was quite thick and savoury ... it makes me want to use the word umami even though I'm not sure it's entirely appropriate and the sesame seeds added a nice smidgen of toasty crunch. It was a great start – I liked it so much I had a little more when it was evident there was some left -  and things just got better from there. 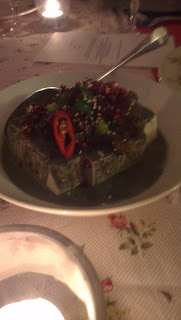 Next up was cold poached chicken with THG sauce (a secret recipe but there was definitely ginger and spring onions in it) which we wrapped in iceberg lettuce. This was one of my favourite dishes of the night – that sauce was something special, though sauce probably isn’t really the best word for it as it was quite thick and chunky. 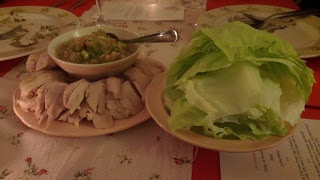 After this we had an aubergine in a sesame and soy vinaigrette with bean sprouts dish. What I love about aubergine is the way it soaks up the flavours of whatever it is sitting or cooked in. It did a good job of soaking up all the lovely soy sauce here and the chilli and spring onions weren't too overpowering. 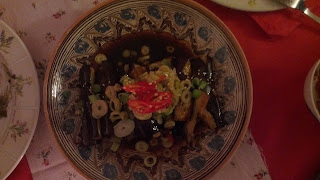 This was followed* by mackerel with sambal. The sambal is also worthy of being singled out as a highlight. I don’t think I’d had sambal before but I will seek it out – it was almost an Oriental salsa as it was, again, thicker than a sauce. It had a very pleasant earthy warmth to it from the chillies used in it. 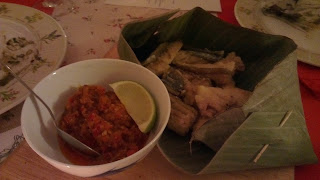 By this point I would say we had concluded the appetiser section of the meal and had segued into the mains. We were still probably feeling pretty confident in fitting in the rest to come. The tide started to turn after this next dish – 5 spice and Sichuan Peppercorn duck in steamed buns with apple, just a touch of mayonnaise and a sriracha-like sauce of which I put plenty on my buns. Probably too much – I sort of drowned out the apple and the mayo but I could taste the duck sure enough. I love duck. It is probably my favourite bird to eat - always so juicy and dark. It's almost boring to say but again, delicious. After having probably too many Yum Buns recently, it was nice to have something similar, but different. There was one bun each but they were very generously portioned. We began to feel close to full. 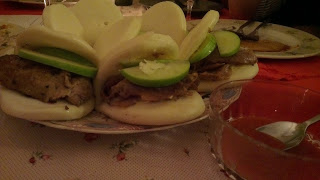 The almost-finale to the night tipped us over the edge. A pot piled high with sweet, BBQ-ey pork belly cubes was served with a large plate of Buddha’s Delight vegetables– a mixture of tofu skins, mushrooms, bean sprouts, mangetout etc and of course jasmine rice to go with it. By the time we were finished with this, there was a lot of patting our tummies and mumblings about being stuffed. This photo doesn't really do it justice. 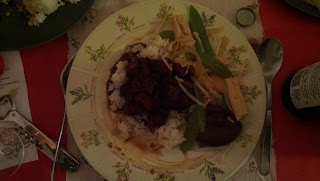 We were intrepid though – dessert was still to come. This was a gorgeous tower of profiteroles filled with orange flavoured ice cream, and decorated with fruits such as the dragon fruit, and with a candle on top for the birthday boy. It was a perfect end to the meal – sweet, refreshing and light enough not to overdo it. 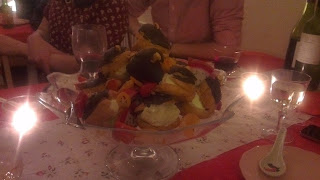 Leigh and Shu had a couple of people helping out in the kitchen, fetching us our drinks from the fridges (you can bring your own alcohol) or just making sure we were attended to -  and giving the girls a hand with the washing up I think. So they deserve a mention and a thank you too, as well as the huge thanks to Leigh and Shu for putting that on and putting up with us!

And thanks to Nick for being the photographer for the evening – my phone wasn’t up to the task.

*There were so many courses and they came at a quick pace, I may have confused the order somewhat. Also, there were vegetarian options available for the meat courses but I'm afraid I didn't partake in those.
Posted by Ginglesnuff at 8:45 PM