When I was in New York I somehow managed to score tickets to see movies for free all the time, and one such viewing was a preview screening of Whip It!, Drew Barrymore’s directorial debut, I believe, and starring Ellen Page. It’s a movie about a girl joining a Roller Derby team. I had never heard of Roller Derby until watching the movie (which is really good, by the way).

Roller Derby is a sport of sorts, between two teams of girls on skates (of the roller variety) who score points when one of their team members laps the other team. Basically. There’s a little more to it than that, but even after watching it on Saturday I wouldn’t be able to fully explain all the ins and outs. All you really have to know is to look for the girl on the team you’re supporting with the star on, and cheer her as she breaks away from the pack. Judging from the movei, it’s quite a rough and ready sport with lots of contact and the girls are not the kind of girls you want to get into a ruck with.

Anyway, so I had heard of Roller Derby in the States, and then pretty much forgot about it. Until I went to the rather weird and not so wonderful night that was Carnesky’s Tarot Drome. This performance art finished with a bunch of girls on skates and suddenly Roller Derby sprang to mind and I wondered if it had made its way across the pond yet. Of course I shouldn’t have wondered, I should have known that it had. There are two Roller Derby leagues in London, the London Roller Girls, and the London Rockin’ Rollers.  Simply because they had a bout on sooner rather than later, I ended up seeing the London Rockin’ Rollers in action first.

I was eager to see if the sport really was as vicious as it seemed in the movie, and how popular it was over here. The bout I went to see sold out in advance, but were allowed to sell some tickets on the door. It took place in a gymnasium in the middle of nowhere, basically, in the outer reaches of London, otherwise known as Plaistow. All the seats in the bleachers were taken and some brave souls were sitting on the floor at the edge of the track. This was at your own peril as sometimes the girls would be nudged with force out of the indicated track and into the audience. 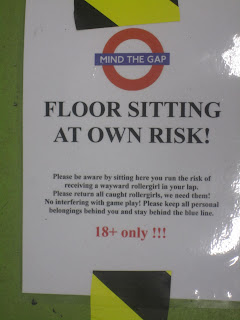 Taking place, as it did, in a gym, rather than a huge purpose-built stadium, it did feel a bit amateurish and like you were just going along to support your local school’s team. But I guess they have to work with what they’ve got. I was sort of hoping for a mini-velodrome in which they competed, but it was just a track marked out with orange tape on the floor. It also, slightly strangely, took place very early evening – at 5, again lending to that school team feeling. It took me and my friend a while to realise alcohol was being served – at that time, in that place, we just didn’t expect there to be any.


For most of the audience, you could tell this was not their first time – they were either very familiar with Roller Derby, or were participants themselves, which was lucky as if we just voiced a question out loud, lots of people were on hand to answer it for us. My friend and I still found it slightly confusing – there were so many referees and other officials, we didn’t know why they kept stopping and starting or what penalties were being given and why. It took us probably the first half to figure out the point system (one point for lapping the other team and additional points for each individual team member lapped). But you get a feel for it as you go and start to know when to cheer and when to groan. It’s pretty fast-paced and the points rack up quickly, which keeps you focused on the game. There was a girl commentating, though sadly the sound system wasn’t up to much so it was hard to tell what she was saying.

There are two halves of 30 minutes each, but with all the penalties and extra time, the whole thing lasted two hours in the end. Sadly the London girls lost by about 40 points. The atmosphere was vastly different to that of Whip It and sadly less aggressive than the movie – not a single fight broke out, but I enjoyed it and I think it’s the sort of thing that would get more enjoyable the more you see and get what is going on. It’s definitely a different way to spend an afternoon.

Posted by Ginglesnuff at 2:16 PM