If there’s one thing I like about possibly being made redundant (admittedly there are few but maybe more than you’d think) it’s the excuse to indulge in order to cheer yourself. And so, in honour of pay day on Wednesday and to commiserate the possibility of never having any money again, me and a couple of fellow soon-to-be-ex colleagues went to Shrimpy’s for lunch.

Shrimpy’s as you probably know is tucked into the Filling Station round where Eat Street (otherwise known as Kerb) is situated. There used to be a bar with prosecco on tap and Homeslice pizzas being served but sadly that was only for the summer. Now there is only Shrimpy’s. We walked in without a reservation and were seated at the bar.

Shrimpy’s is a little odd inside. It reminded me of being on a 1920s cruise ship with the pale pink and sort of art deco feel. Something about the pineapples, and the chunky crystal-like glasses for water. 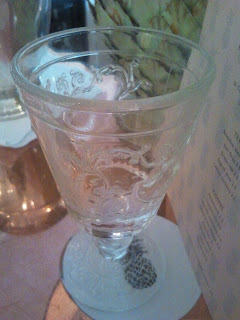 But then, on each side wall there were images that were in a graffiti/stencil style of sort of pop culture, and then on the back walls there were two giant canvasses of giraffes – one normal, one weirdly contorted. The different looks don't gel well and I can see how it would lead to people saying it's trying too hard to be cool.  Much has been made about how it is filled with hipsters in the evening, but on a weekday lunchtime nothing could be further from the truth. The place seems too understated for the kooky side walls and just full of the people who work in its environs.

The food was also a little understated but mostly worked. It took me a long time to decide what to order but eventually I went for the duck breast, which I can so seldom resist, especially when coupled with one of my favourites – sweet potato. It also came with grapes and sliced pear. One of my friends ordered the fried chicken and red peppers, with fries as a side, and my other friend got the famed soft shell crab burger which came with fries.

We may have had a naughty glass of wine as well. It was only small.

I liked my duck – the skin on the top was crispy with some lovely salt sprinkled on it and it was cooked well. It possibly could have done with being rested a little longer as a lot of the juice (or blood) was running out of it and mingling with my pureed sweet potato which didn’t look too appealing. The grapes and sliced pear scattered among the sweet potato didn’t work too well. The sweet potato was nice with the duck. The grapes and pear were nice with the duck. They weren’t all that nice when combined all together. 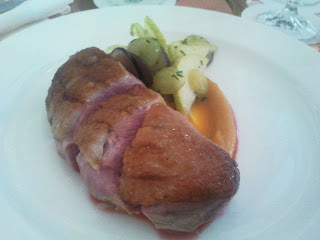 I must admit I totally had food envy when the fried chicken came out and I’m pleased my friend let me have a taste. It was far bigger than I expected – a log of breaded and fried chicken sliced and then festooned with tiny, tiny cubes of red pepper. It was really juicy and the coating was lovely. The red pepper bits were pretty good too. Absolutely nothing wrong with that dish in my opinion. 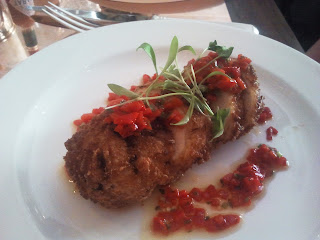 I can’t comment on the soft shell crab burger as I can’t really bring myself to eat whole soft shell crab. So I have had to ask my friend what she thought of it and she said “
Crab burger was excellent - it's hard to go wrong with fried crab though.” It's never a bad thing to pick something good and do it well though. 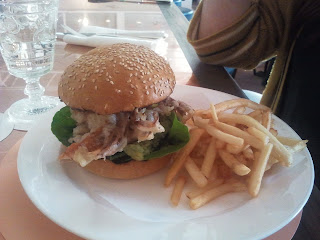 I did nick a few fries and they were rather good. They were proper fries, not chips, nicely seasoned, not too greasy.

I was pretty pleased by this place on the whole. It’s maybe not somewhere that I’d go gushing about to all and sundry but it did make for a pleasant, slightly upmarket luncheon treat. Service was friendly and attentive, though not overly so – they were especially good at keeping the water glasses topped up. Our mains and glass of wine came to £22 each more or less.

Oh, and how could I forget? As a pre-meal snack they served corn nuts! They’re basically puffed out, deep fried corn kernels and I don’t know what they’re called over here, but take my word for it – they’re delicious, and I rather hope they start a trend for them.

Find the menu & restaurant information on Zomato
Posted by Ginglesnuff at 4:22 PM