Squeaking in in the nick of time, Stephen and I got a table at The Good Egg for brunch. Not that I would have minded tucking into their Middle-Eastern-inspired main menu but the place is called The Good Egg and it felt wrong not to be having a dish with egg in it somewhere. Stephen had them baked with chorizo and I had them fried on a brisket hash. And I had a Bloody Mary because brunch. Of course it had to be the Red Hot with gin, pastrami spices, tomato juice & lemon and it was very pleasing, if not particularly hot.

Each dish was hearty to say the least. Huge chunks of pastrami brisket were in mine, along with plenty of potatoes and some refreshing pickle to cut through the fattiness of the brisket. Stephen thought my eggs were overcooked but I liked them verging on (but not quite) solid. 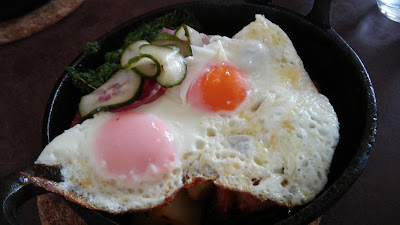 Stephen's Shakshuka was stuffed chorizo in its tomatoey, warmly spiced bath. I wanted to get something different to him but did have a little food envy as he scooped it all up with his bread. I managed to try one or two mouthfuls but was so stuffed from my own I didn't need to pester him for more. Didn't even try the good-looking babka on the counter so will need to come back at some point for that! 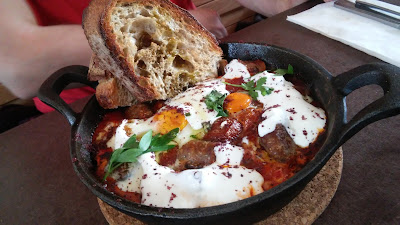