I’m not entirely sure who the audience for Heist Bank will be but whoever it is I think will very much enjoy the place. It’s in a bit of a no man’s land next to the Paddington basin, and is the newest bar from the people behind Coin Laundry, who, it turns out, have several other places in London including Ask for Janice and Graphic bar, both of which I like very much.

The place isn’t aiming for haute cuisine – the mainstay of its menu is pizza. There were four different kinds available to try at the launch I was invited to and I tucked into three out of four – I couldn’t bring myself to try the one loaded with mushroom (mushroom – bleugh). And loaded it really was. Same with the crushed pea, goat cheese and radish. These ones were more like having a load of topping with a little bit of pizza, rather than having a pizza with some toppings. For me, it was too much. Much too much. I had to break down the huge block of goat’s cheese and there was so much crushed pea it was falling off everywhere. Luckily, the meat lovers fare better and have a more balanced slice. The Italian sausage was a juicy number, and the lamb, feta and rocket was not a bad appropriation of a lahmacun. 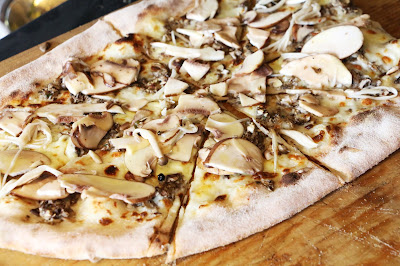 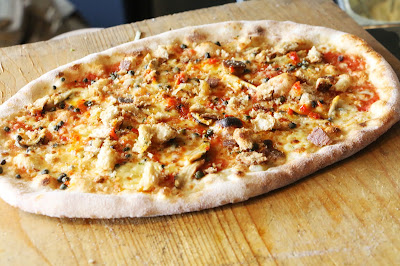 There were plenty of tasters on the menu to try. Others being passed around included an olive and cheese curd pastry which was utter gooey, chewy deliciousness and some spicy nduja croquettes which were pleasant but I wished they’d had a bit of the actual meat inside rather than it being all creamy. 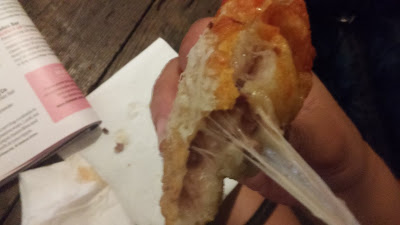 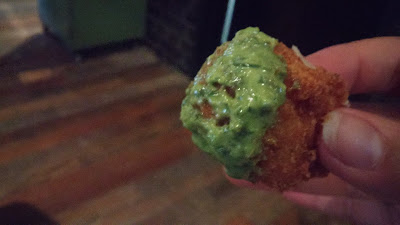 They had two special cocktails to try – a floral take on a French 75 using their own house-infused gin, and an ‘Off the Wagon’ which was a very summery way to enjoy whisky – blending it with orange.

I felt it was my duty to try out some of the other cocktails on the list too. I can confirm the peach bellini, scofflaw and bramble are all great. I also tried the Delicious Sour which was too sweetly peachy for me. It was even more peachy than the peach bellini! 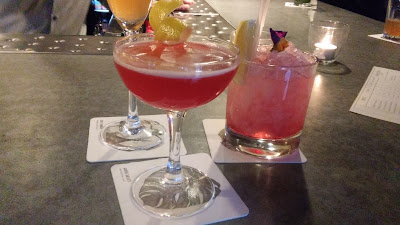 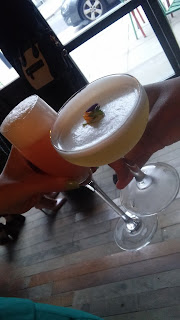 Wines by the glass are all the same price – a policy I commend, and which means you can get a viognier or a malbec for the same price as the pinot or merlot you normally drink cos it’s cheap!

And they have plenty of different beers on offer.

It seems like a great after-work set up, with plenty of space so a whole team could go down for a few together. There’s even a karaoke space perfect for when you’ve all had one too many…

Posted by Ginglesnuff at 1:13 PM