Way back in 2013 I think it was, Stephen and I spent an evening under the Arches in Bethnal Green – firstly having a few small plates at what was then called Mission – Sager + Wilde’s newest place, then a cocktail at the Craft Cocktail Co.

Both have just recently been rebranded, and I was invited along to try the new Sager + Wilde Paradise Row. Being a warm, though rather wet at times, evening, we sat outside and enjoyed several dishes from their bar snack menu along with a few beverages.

Should you want to sit inside and make more of a meal out of it, they do a four course set menu as well for £42. 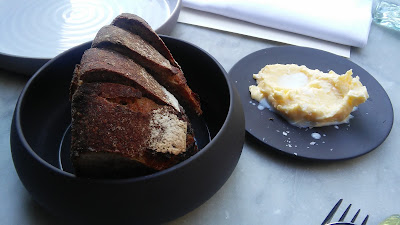 My eyes honed in on the bread with cultured butter – thick slices of dense and chewy bread with butter to die for, the culture providing a pleasant tang. While deciding what to order, we noticed the couple next to us being brought a huge fried glob of something stuck together. What is that, we wondered. It was the whitebait – fried with seaweed and bean kakiage. All at once, it sticks together and you peel off chunks to eat a bit like you would an onion blossom. I enjoyed the veggie part of this, which was sweet, the batter being light and like tempura, but I couldn’t bring myself to eat the whole whitebait. 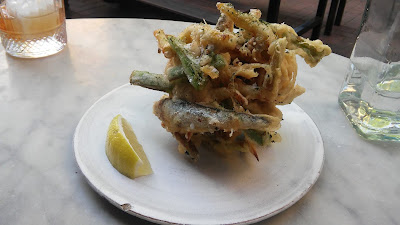 Stephen couldn’t resist having the clams with peas and flowers. A little heavy on the pea, perhaps, this was the prettiest dish by far, and Stephen said it was great. I did have one bite and the light flavours of the pea and flora seemed to combine well with the subtly briney clam, but I am still yet to be convinced on clams. 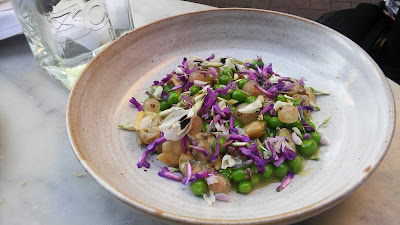 ‘My’ dish was the iberico pluma – pork, with broad beans and herbs. It was supremely soft, being served in that new-fangled way of cooking it quite rare. Stephen wasn’t so much of a fan but I thought it was cooked delightfully. 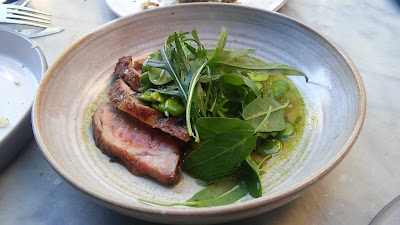 And if there's a sandwich on the menu you know I'll want to try it. This one was mortadella in a roll, slices hanging out of a sweet roll with a nice garlicky butter in it. Difficult not to finish this in two bites. 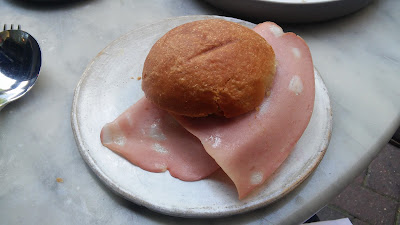 We’d had a cocktail each with our dishes, but moved on to wine while we considered whether to have anything else. Our friendly waitress brought us two types to try – Sager + Wilde’s own Syrah, and a French number. I liked the Syrah, Stephen preferred the French one so we had one of each and ordered the two cheeses they had on offer. One was a crumbly yet full of flavour Lancashire, which came with almost equally crumbly oat crackers, the other was a pungent and intoxicatingly strong soft cheese – St Cera, which we spread over chunks of (slightly too) grilled bread. 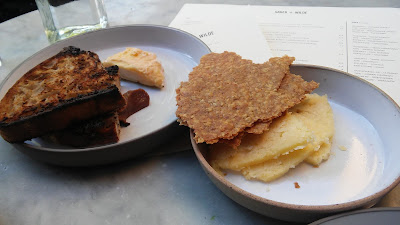 Even though ‘Mission’ seems to have upgraded itself to more of a restaurant, it still feels like a neighbourhood place that you could drop into for a drink or a few small plates without having to make a big deal of it. Has to be said that the staff were very friendly and there was very little to-do when I split an entire glass of red wine, mainly over Stephen, but also partially over the ground. They were quick to offer lots of reassurances that it *probably* would come out of his nice new jeans... (it did).

Posted by Ginglesnuff at 1:45 PM