What even is Thom Foole’s House Party, we kept asking ourselves as we waited for the upstairs to open. None of us were sure what we were letting ourselves in for. But we took the gamble and it paid off.

It’s a comedy night of s special sort. With our inimitable host Wilmot Brown, several acts took to the stage and had many of the audience literally crying with laughter.

These comedians are all ‘character’ stand-up with their own stage personas. And none of them were afraid to push the envelope. It was all very surreal and I can see that it might not be everyone’s cup of tea, but if you like things a little off-kilter and making very little sense, then dive on into this night. We had a blast.

Wilmot himself is an older ‘gentleman’ (played by Marny Godden), certainly not suffering from a lack of confidence even if his career has seen better days. He’s a frisky sort too – at one point a member of the audience had been captured and was sequestered to the bed (why is there a mattress on stage??) for potential romantic liaisons later. 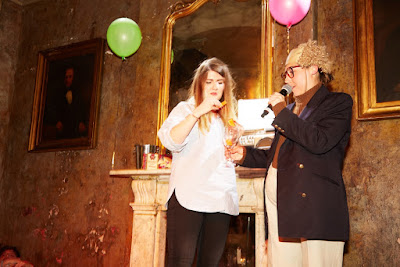 The Establishment were the first act of the night (and perhaps my favourite) – two uberposh men, who crept through the audience uttering nothing but ‘mmmms’ and lasvicious ‘yeses’ as they peered at the audience members they passed. They were quintessential country Englishmen and dithered about onstage giving us a little window into their lives of silliness and casual arms dealing. 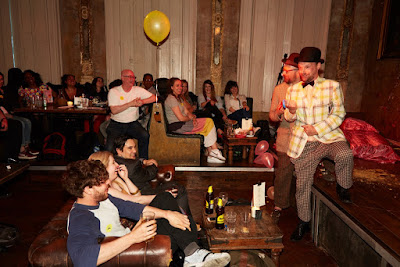 We then had Lee Kern whose persona was someone incredibly awkward whose comedy act was to give us a presentation on the history of Rock and Roll. It was boring, it was dry and factual, he danced awkwardly, it was hilarious.

In between acts we had games! Yes, games. Musical statues, the equivalent of grandmother’s footsteps, charades, one lucky guy even got to play Kiss Chase with Wilmot. And there was a maypole dance. Oh – and Limbo! Yes, this night has it all.

Oh Standfast did what he called poetry/standup/art depending on whether you laughed or not (don’t laugh and it’s poetry, laugh and it’s standup – don’t get it? It’s art). And Sophie Pelham came on board with her two plastic babies strapped to her chest. I really liked the premise of her act and thought there was potential although it didn’t get quite the same belly laughs as some of the others.

The headline act was Mr Frank Sanazi himself. This old rogue is a crooner with the Axis of Evil rat pack, belting out the hits of Old Blue Eyes with a decidedly fascist twist. Expect lots of clever wordplay, taking some of the lyrics you’ve got to know and love and making them altogether more sinister. I think Frank was a pretty class act - he managed to get down the mannerisms of Frank Sinatra yet segue seamlessly into an impersonation of Mr Hitler. Who would have thought that combination would work so well? 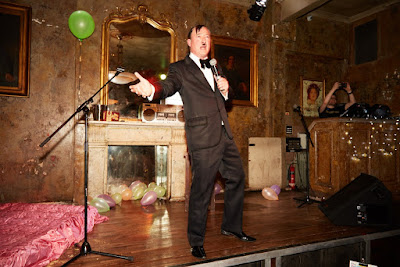 If you’re of a sensitive nature then this night may not be for you, but if you’re up for a laugh, then you will get many at this event. Thom Foole knows how to throw a party.
Posted by Ginglesnuff at 2:42 PM