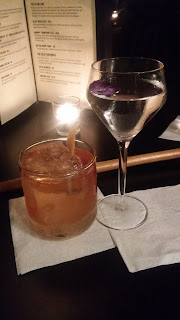 Little Bat is Callooh Callay’s little sister and you would think that people would be all over it. But, sitting as it does, off the main strip of ‘Supper Street’ in Angel, it seems to have avoided the attention of the masses. Primetime on a Friday night (9:30 pm), the place had patrons, but you could easily walk in and be seated at a comfy booth rather than sitting up at the bar. I do like sitting up at the bar but sometimes a cosier seating arrangement is more appropriate. Say, if you were on a date, for example.

While I waited for mine to arrive I perused the menu. Compared to some menus these days, there was a huge amount of choice on offer making a decision rather difficult. My friend helped me out by picking for me (and luckily he has good taste) so I had the G & T martini – gin, rose-infused vermouth and crème de violet being the main ingredients. My companion had an old fashioned because he is a man and that is what men drink. There were so many drinks that sounded interesting, I wanted to try them all but picked the hedgerow smash for my second – rye, bourbon hedgerow cordial and black walnut bitters! I was really pleased with both of my drinks – strong but tasty – not too floral or fruity for my tastes. The old fashioned was met with approval buy my friend’s second drink – An Apple a Day – he felt was bordering on bitter and medicinal tasting, rather than the apple pie in a drink you might expect.


It may not feel quite as quirky as Callooh Callay, lacking the ‘secret entrance’ that the other has, but if you want somewhere that has the same inventinveness that Callooh Callay brings, without having to worry about whether you’ll get in, then this is the bar for you.

Posted by Ginglesnuff at 1:12 PM