I thought Clapton was meant to be cool but on a Saturday night you're apparently hard pressed to find anywhere with a proper party vibe. Blondies was the best place we found and it's a damn shame it shuts at midnight as it seems to be crying out to be the late night (good) party bar Clapton needs.

We got in there at about 10:30 and stayed for a drink, soaking up the loudish music that was pumping out some of my favourite RnB jams. They even played Twista Slow Jams. You hardly ever hear that one out. 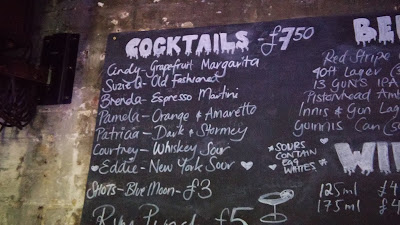 I actually got there earlier than Carolyn (no change there then) and was persuaded by the lovely girl behind the bar to have a shot of their house shooter Blue Moon while I waited. At only £3 I couldn't say no. It was fruity and pleasant to sip on before we started on the real drinks. Carolyn of course had a Cindy - a grapefruit margarita (she loves fruity things) and I went for good old Brenda, otherwise known as an espresso martini. 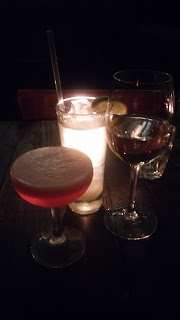 We probably should have stayed there the rest of the night but we had other, misguided plans – we went over to the Clapton Hart which stays open until 1, thinking we'd find a young and lively crowd. It was kinda empty. So we went down to the Windsor Castle. I'd been before and it's a lovely pub. But quiet. The Bonneville was also a place I'd happily visit for a lowkey night. Not Saturday night material (though the toilets are worth a trip themselves - like a recreation of Victorian cobbled streets, they are quite eerie!)

So we ended up at Biddle Bros which I would describe as sketchy at best but at least had people dancing until the early(ish) hours.
Posted by Ginglesnuff at 4:39 PM