Occupying the premises not-so-recently vacated by Mezcaleria QuiQuiRiQui, The Liquor Cabinet isn't the kind of place you can easily stumble on without knowing it is there. It's behind and underneath the Golden Grill kebab shop on Hackney Road and only a chalk board with faint signage directs you to its presence. Which is probably why we had the pick of the place when we walked in at about 10:00.

The place is pretty bare - some wooden benches against the wall make up the booths, and there are a couple of makeshift nooks and crannies to sit at on the other side. There's not much in the way of decor on the walls. It could never be accused of being style over substance. They were playing pretty good music and within about 20 minutes of being there, all the other booths had filled and a bit of an atmosphere was being fostered. 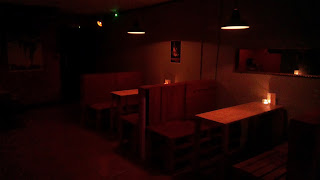 The cocktail list is short and covers the classics. Their 'hook' is that they pre-mix all of the cocktails and bottle them before opening, ensuring that each one is as consistent as the last. Seeing them all lined up in the fridge is kind of cute. It somehow makes you feel like you're ordering an innocuous juice or something, the potency almost comes as a surprise. However, if you thought the time they saved by pre-bottling might mean more effort is expended on garnishes, then you're wrong. A strip of orange seemed to accompany every drink. 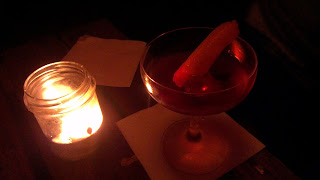 But you know what? The drinks are good. And strong. And cheap! They were all £6 each, which in my book makes the trek up to deepest darkest Hackney Road worth it.

The bar staff of one was also pretty friendly - my boyfriend got chatting to him about the war on nightlife Hackney council seems to be embarking on. Apparently they're implementing a 'one-in one-out' type rule for new openings, in an effort to clamp down on bad drunken behaviour. The strategy seems misguided if it means more places like this (or Sager and Wilde for example) are restricted from opening as these are hardly the kinds of places that are going to contribute to drunken scraps and scuffles in the street at kicking out time.

After such serene yet convivial surroundings, walking into The Looking Glass was a bit of a shock to the system. And not a welcome one unfortunately. We definitely got the feeling that The Looking Glass was full of spill-over from Shoreditch High Street, which is fine if that's what you're after, or expecting, but we were expecting a similar sort of low-key refined cocktail bar vibe we'd got from The Liquor Cabinet. By the time we got there it was a little after 11 and so we were probably entering the rowdiest point of the night. Had we gone earlier, or on a different evening I wouldn't be surprised if we had an entirely different experience. Though I'm sure the bar stools would have been just as uncomfortable and impractical. The place was really busy and yet we still managed to grab a couple at the bar. This was probably because they seem to have been designed to actively repel you to sit on them. Kind of slippery and nowhere comfortable to put your legs.

The bar staff were pretty rushed off their feet, trying to keep up with the crowd at the front. I'm sure they knew their stuff, and overheard one of them trying to determine what kind of cocktail one of their customers would like (starting with the basic - sweet or sour?) but whereas normally sitting at the bar affords you some personal attention, it wasn't the case here. We had been served at one end of the bar and then moved to sit. I managed to get our bartender's attention to show him where we were and was met with a curt acknowledgement. Smiles seemed lacking.

Also, I sadly did not get to actually go through the Looking Glass for which the bar is named as there was a private engagement party happening in there. 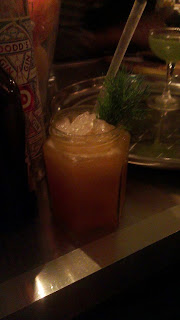 The list of drinks is inventive and fun. There were two incredibly tasty-sounding dessert cocktails (the past your bed time!  for example, made with orange and cacao infused bourbon, Oreo syrup, and milk served with mini oreos), that I would have jumped at having, had we been having the last drinks of the night. But I didn't want anything too heavy and instead took a gamble on a carrot-juice-based drink. I don't think I have ever seen a cocktail which uses carrot juice, but I like carrots and I like to try something different. This one was called the Shoreditch carrot and featured Jameson whiskey with sweet caramel syrup and it was actually pretty good! Stephen had one which came with a huge banana leaf in it. Which looked impressive if nothing else but happily tasted good too. 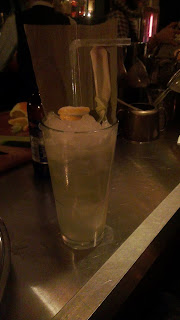 Quite a few of the cocktails seemed to make use of either lavendar, or tea, neither of which I'm a big fan of, which limited my choices somewhat. This is just a personal preference of course, but did contribute to my lack of enthusiasm for the place.

So, I am well aware that we may not have seen The Looking Glass at its best, but it was our least favourite place of the night. To be fair I think a return visit will have to be on the cards - keep an eye on my Twitter or Facebook for a follow-up review.