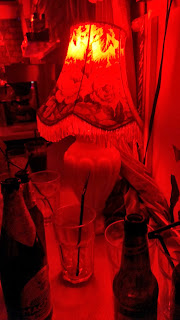 I was first drawn to going to the Love Shake because of it being a diner and the fact that it does milkshakes and pancakes and whatnot. I actually ended up going because we were out in Shoreditch quite late and we happened to stumble past and stumble in. The place was buzzing, full of drunk people but, even though this had been a bit of a turn-off in TheLooking Glass, it was more or less what I expected from this place and we were now in the mood for a more mainstream bar. They have some very silly (and by silly I mean good) offers on – two beers (bottled) for £5 for example – of which my boyfriend took advantage. They don’t  have anything particularly exciting on offer – if you’re looking for craft beer, this isn’t the place to go. But if you’re looking for some cheap booze to get you drunk with a fun crown and a casual atmosphere then going here wouldn’t be too much of a misstep. I stuck to wine and therefore missed out on one of my main reasons for going – the hard shakes.  A return visit is therefore a must.

The place was a little bit kitsch – they were playing a Bond movie on the TV screen – one of the old 70s cheesy ones, though with the sound down. The place is a diner’s throwback setting, and it’s not very large. To be honest, the place isn’t very ‘cool’ nor trendy despite the diner theme, but at midnight, neither of these things seemed to be very important. 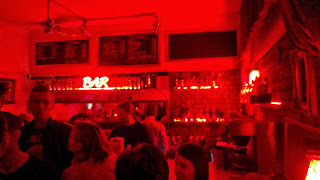 We stayed for a couple of rounds (two wines, four beers) and then recommenced stumbling, this time off to The Strongroom where I knew Timebox was happening and there was free entry. There was a bit of a queue as there aren’t that many bars that let you in after midnight for free but the doorman was entertaining and the crowd were friendly so I didn’t mind the wait.

I seem to have been spending a lot of time in the Strongroom lately (we went there for Stephen’s birthday a month ago, then as part of the Remixed Festival two weeks ago) and as a bar I like it and knew what to expect – bar and seats upstairs, downstairs another bar and more space for dancing. No cloakroom – sort it out Strongroom!

Timebox was indeed on.  And it is one of the New Untouchables nights so I sort of expected the place to be inundated with Mods. But it wasn’t. It was just a normal Saturday night for the bar, albeit one where they happened to be playing authentic 60s music rather than mainstream. At least, that’s what I remember. You may have noticed that by this point we had been to five bars and so I probably wouldn’t make the most reliable witness.

In some ways, Timebox is good because unlike the other NU nights, there are no intimidating scenesters, but in another way it's not so good because those intimidating scenesters is what makes the nights feel so authentic. If I’m going to listen to 60s R n B and Garage that I don’t know, it should probably be in a more genuine setting. But for a place to go on a Saturday night The Strongroom is a strong contender and having 60s mod music on the go in the background is no bad thing. It was just sort of irrelevant.

Posted by Ginglesnuff at 4:02 PM