Judging from the fact there were two large groups, probably both marking a birthday and then us who were there to mark our fifth year anniversary, something about Mr Buckley’s must appeal to those in the mood for a celebration. I hadn’t been before but the pictures of their food and the menu sounded good, as well as what I was seeing on Twitter about it as a bar. I made a reservation at 7:45 and while it was quiet when we arrived, the two groups either side who soon joined created a bit of an atmosphere. I expected it to be more restaurant upstairs and more bar downstairs but in actual fact both levels rather leant themselves to sitting down. 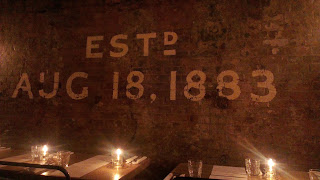 The place has a clean, stripped back look – bare yellow brick walls, wooden benches and tables.  It appealed to us as soon as we came in and we made murmurings of approval to each other. Our lovely waitress (everyone was lovely in fact) came over and ‘explained’ the menu to us. They have, (like so many places these days) a sharing ethos but one that seems to work more functionally than just telling people to have three small plates each and divvy them up. Here you have jars, small plates, mains and sides so you could do a traditional starter, main, dessert combo if you wanted. What they recommend, however is a jar or two to share, a small plate or two to share (depending on how many jars you’ve had) and then a main to share. And these really are designed for sharing. We had everything come together, which may have been a mistake as what we ordered didn’t exactly complement one another. We also kind of ignored the sharing idea with our jars, which was also a mistake. They are pretty packed and a whole jar to yourself really does feel too much of one thing for one person, even if that one thing is nice. We had got one each because Stephen wanted the black pudding with thyme and I’m not keen on black pudding. So I had the ricotta infused with basil with a tomato compote on top.  They both came with e5 sourdough and crostini. 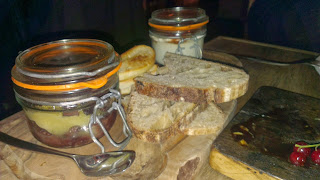 To be brutally honest, the jars were not a strong point. The ricotta was, dare I say, too creamy and not cheesy enough. Even with the very nice compote on top it needed another dimension – some more structure or density to it. A different cheese perhaps entirely. Stephen’s black pudding was again way too much for one person (our fault) but it was also cold. He likes cold black pudding (and managed to somehow finish it all) but thought that in this case, if it was warm it would have been better – he missed the crispy edges you get with cooked black pudding.

So the jars were nice, but I don’t think either of us would order those particular ones again.

The main – the lamb – however… And our sides of carrots and fennel… Lush. I’m not one to get excited about vegetables generally although there are a few I do take quite a shine to. Carrots are one that I have had a relationship with since I was young – they were the only vegetable I would eat willingly.  But only if they were raw.  As I have matured though, I have started to appreciate the cooked carrot. And these were the best I’ve ever had I reckon. The natural sweetness of the carrot was brought out and they retained a bit of bite (I hate it when they’re too mushy). The fennel gave a pleasing sharpness and it was all drenched with olive oil (or butter), negating any health benefits but ratcheting up the tastiness. And there was loads of it.  Again – ideal for sharing. I’d have those again in a heartbeat. 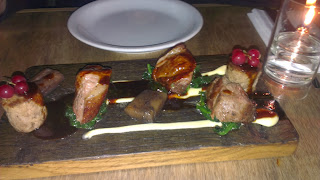 And the lamb dish was splendid. Lamb two ways – lovely chunks of melt in the mouth morsels and then a ‘tot’ each of coarser lamb meat. These were accompanied by a rich, sweet redcurrant jus and parsnip puree and parsnip cube. It inspired us to have a conversation about which is our favourite meat, and made us realise that even though beef might immediately spring to mind, lamb has such an excellent, underrated flavour it should probably be awarded the top spot. Again, as a main for one it would have been perhaps a little too large – the symmetrical layout and amount were perfect for sharing. Very romantic. (Awful picture - see Mr Buckley's facebook for one that does the dish justice.) 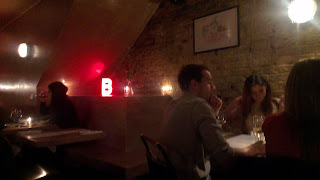 Trying not to stuff ourselves we decided against having a dessert, but I had treated myself to a cocktail with dinner. I couldn’t decide between the equally tempting elderflower fizz or gooseberry fizz so I asked my waitress’s opinion. She said: elderflower so that’s what I did. Very refreshing but enough alcohol to remind you it was a cocktail. However, I could have easily guzzled that and had to do my best to make it last the meal.


Their menu changes weekly and every time I check the food sounds great. Our not-so-successful jars aside, I’d love to make this a regular haunt. It was a lovely start to our night of celebration.

Follow my blog with Bloglovin
Posted by Ginglesnuff at 12:51 PM