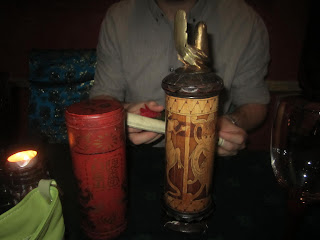 Archipelago made my list when I was in the States and came across an article by GreatLittleplace.com which listed some of the quirky restaurants in London. It sounded interesting, giving you the chance to try exotic beasts from far and wide.

It wasn’t the kind of place I could normally persuade Stephen to go to, so I took advantage of it being my birthday and decided to come here to cross it off the list.

Quirky it certainly is, both in menu choices and décor. The inside feels like some kind of opulent African den, with masks and carvings throughout, all dark, lush reds and greens. Our dark wood chairs had patterned cushions on them and we had some kind of carved bird (or possibly seal) resting at the base of the table. Menus are rolled up scrolls hidden inside wooden decorated jars. It certainly looks quite impressive.

Unfortunately it is also rather expensive. I know that you are paying for the novelty, but at the end of the day, we didn’t feel that the novelty was worth the price tag. The food just wasn’t that good, or that bountiful for the extra pounds they entailed. Of course, exotic meat probably isn’t that cheap to source, but if we were blown away by it, we probably wouldn’t have minded. The fact that they charge you for every little extra does nothing to help.

So, we arrived and after ordering our drinks, we were presented with a selection of canapes: mango and crab, a bruschetta which I was very impressed with, some breads and some sweet potato crisps. This was included in the ‘cover charge’ of £2.00. Would I prefer to save the £2.00 and skip the canapes? Certainly. 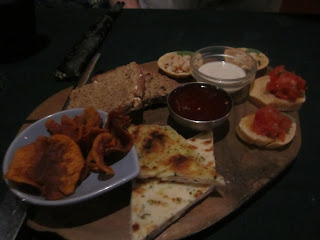 For our starters we chose the most extraordinary but still appealing dishes they had on offer: crocodile wrapped in vine leaves, and zebra roulade with mango and raspberry chutney. Zebra, as it turns out, doesn’t have much of its own taste, nor a particularly good texture, but the spices it was cooked in and the chutney made it quite a tasty, Indian-influenced dish. Stephen’s crocodile tasted a bit like fishy chicken, and though I thought it was probably the nicest vine-wrapped dish I’ve ever had, this doesn’t say much as my previous experiences have been of vine-wrapped cold rice. The plum dipping sauce was what really made this dish. Both the crocodile and the zebra came were £10.00 or so and as you can see, you didn’t get much.


In between we were offered a palate cleanser – a choice of three granitas. I went for the pink gin which I really enjoyed, and Stephen had the mango and lychee. I was hoping to be pleasantly surprised when we got the bill, but no – we were charged for these palate cleansers. I knew we would be, if they charged for the tiny canapes, but Stephen thought it was sneaky of them not to mention it. Charging for this sort of stuff does feel like a mistake. If you’re going to emulate costlier establishments by offering canapes and palate cleansers, and charging similar amounts for your dishes, then you should know that places like these normally make them complimentary. They should be a bit of a thank you for choosing the restaurant, not a privilege to pay for. 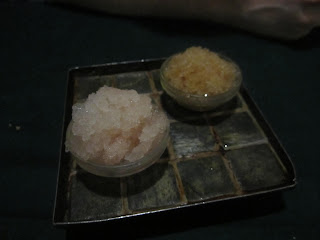 But on to the main. Again, we plumped for the unusual, but ones that sounded good. I had the ‘Hot Marsupial’ which was an Asian-inspired dish of kangaroo with bok choi and water chestnuts, with a tzatziki-like sauce. It was tasty enough, and the meat was similar to beef. Stephen’s choice of bison with cassava chips (the Pontiac Rodeo) was also quite similar to beef, but gamier with more depth of flavour. I actually thought his dish was really good. I really liked the bison and I really liked the cassava chips, but Stephen thought the serving was paltry for the price and that the mushroom ketchup was bitter. Each of these dishes were about £19.00.


Yes. Extortionate really. We wandered back up to Baker Street and passed one of the Galvin restaurants. In the menu in the window they had only one entrée which was more expensive than the ones at Archipelago. And I bet they don’t charge for bead.  I think if the starters had been priced at around £7.00 and the mains at around £13-£15 I would have been quite happy with my meal. Of course, I was pleased to have gone, and crossed it off my List, but we ended up feeling like we hadn’t really got our money’s worth.

The restaurant is cute, it is so overly decorated it does start to feel a bit like you’ve entered another world. And the service was friendly. Something about it wasn’t quite right though. It should have been quite a romantic setting but the ambience didn’t provide this. I think it was too quiet, even though there was some background music and we were sitting among other diners. When a large party of office workers came in, rather than being annoyed they were spoiling the mood, I was pleased that they created a bit more of an atmosphere.

Apparently Archipelago is closing at the end of the autumn to search for bigger premises, although it wasn’t exactly full when we were there. I wonder if it will actually reopen, or if London will miss it if it doesn’t...