I first heard of the Icecreamists when they caused a furore by creating an ice cream using breast milk. Sounded interesting to me so I put them on the List.

The Icecreamists are like an alternative, higher class Ben & Jerry's. They describe themselves as boutique ice cream  and the servers there are dressed slightly alt/goth. Their ethos is to revel in the idea that ice cream is a sinful luxury and that it's an adult's temptation. Side by side with the list of ice creams was a list of 'Vice creams' which included a cocktail dedicated to Steve Jobs (it contained apple vodka - 'app'le - too soon?) and ice cream concoctions such as ice cream sandwiches. I was there for just some straightforward ice cream though. 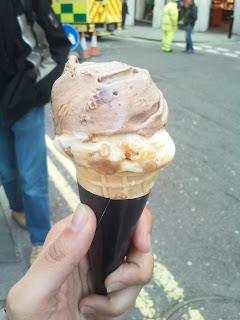 It's laid out like gelato - huge swirly tubs of it decorated with elements that are contained within the ice cream. They have your expected vanilla and chocolate, even dark chocolate and white chocolate, and then the have the flavours that remind you of Ben & Jerry's. For instance, I had Ferrero Rocher and Popcorn. They also had peanut butter and stimulant ice cream on offer. While I was intrigued by that one, I was afraid it might taste like Red Bull.

I watched as other people's orders were scooped out. It seemed like hard work for the girls behind the counter - the ice cream was definitely not soft serve. So I wouldn't say it's exactly gelato. Nor is it cheap at £4.95 for two small scoops. But I wasn't too surprised at the prices considering it is in the piazza in the heart of one of the most touristy areas - Covent Garden. What I would say is it's delicious. Much better than I thought it would be as I suspected it would be more gimmick than taste.

The Ferrero Rocher was on top and tasted pleasantly chocolatey and praliney. I thought that was all there was to it until I was nicely surprised by pieces of chocolate wafer within. Now it tasted like a proper ferrero rocher! But, I was still very pleased that my popcorn ice cream was on the bottom as I do like to save the best to last and from my first lick I knew I liked this one better. This wasn't just popcorn but toffee popcorn ice cream with toffee pieces and sauce throughout as well as bits of popcorn, including one huge toffee covered piece. Yum. Double yum even.