I didn't have much of a desire to go to this museum, if truth be told. But I saw from my various sources that they have several exhibitions on at the moment, that were up my kind of street.

The first was The Stuff of Nightmares which promised to transform the Front Area into a dark and nightmarish forest where the retelling of Fundevogel plays out. It was actually made by local schoolchildren and sounded creepy. It was pretty disappointing. There was a small 'forest' with some macabre looking children's playthings and a TV playing an odd animation on a loop which almost gave me goosebumps. Almost.

So it was with baited breath, for all the wrong reasons that we went into the museum to look at the other exhibition I wanted to see - My Giant Colouring Book. This was also on the small side. 21 pictures by Jake and Dinos Chapman. They were images based on children's join the dots pictures but fleshed out and made altogether unwholesome. But even though there wasn't much to the exhibition, I thought it was really good. You could just about see the original shape in them all and some of the images were pretty disturbing considering their origins were in innocent pictures. It didn't feel right that children should be running among them. Below are two of my favourite. 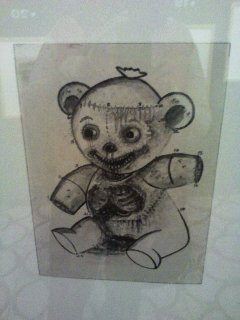 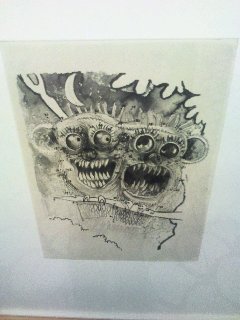 Considering the two main reasons I wanted to come took all of ten minutes to look through, we thought we might as well take a look at what else the museum had to offer. It is free after all. And I'm glad I did - it's actually quite fun! Apart from the fact that there are kids running all over the place. But I suppose you shouldn't begrudge children enjoying themselves in a museum all about children. Well, childhood, which basically means a museum of toys.

There's a hell of a lot in there and the museum have done their best to insert some interactivity into it, with a few coin operated displays and some free stuff for the kids to get into.

So yes. Toys and toys and toys all through the ages. It was like stepping back in time. Stephen and I enjoyed pointing out to each other the toys we'd had when we were young and I personally enjoyed marvelling at the grand dollhouses. But after a while it did get a bit tiresome and by the time we'd got up to the other exhibition I was interested in: Magic Worlds, we were ready to leave. It wasn't that amazing anyway. And so I leave you now, with a video of my favourite thing from the museum... Wood... as waves.
Posted by Ginglesnuff at 9:31 PM

Email ThisBlogThis!Share to TwitterShare to FacebookShare to Pinterest
Labels: Bethnal Green, children, Jake and Dinos Chapman, Magic Worlds, museum, Stuff of Nightmares, things to do, V and A museum of childhood