After severely stuffing myself for lunch, I thought a little pedestrian journey might be a good idea to walk it all off. Considering I was round the back of St Pancras, I figured St Pancras Gardens wasn't too far and I should go round there to have a look-see at the Soane mausoleum.

It's amazing all the tranquil places you can find in London. I have always had a fondness for cemeteries (at least in the daytime) - they're just as good a place to rest as a park and often much less crowded. I wonder how many people even know about St Pancras Gardens as it's as in the middle of nowhere as you can get while still being within London. I came to the back entrance, which doesn't announce what it is, but I was pretty sure it was the right spot. I was correct. A minute in and I knew I'd found what I was looking for, because it was the only tomb in the place with a fence around it. So that was a shame because it would have been nice to get up close. But, being rather grand and a little bit famous, it seemed to have gotten some unwanted attention and thus the fence was necessary.

So who is this Soane guy anyway? He was an architect and designed his own tomb (morbid much?) for him and his family. You may have heard of some of his other works - the Bank of England for example. He also lends his name to the Soane Museum in Lincoln's Inn Fields which is actually his old house and filled with weird and wonderful artefacts that he collected from around the world. Asides from the Bank though, one of the lasting gifts he gave the world of architecture was to inspire the designer of the iconic red telephone booths by this very tomb (hence my desire to see it).  You'll see what I mean when you look at the photo below. 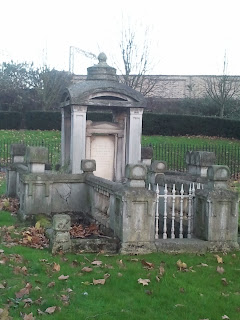 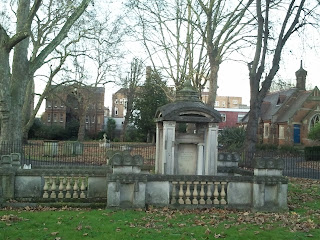 So this is just a short and sweet entry as there's not much to say about it. St Pancras Old Church is actually rather pretty so I took a picture of that as well. 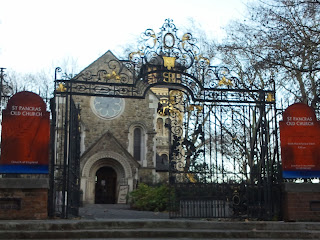 Posted by Ginglesnuff at 9:29 PM