I went to book the London Cocktail Club for 9 pm on a Friday and was told it was all booked up, which I was hardly surprised to see. But we thought we’d pop by anyway just in case there was a cancellation. We were in luck – there were two stools at the bar just waiting for us to perch upon them.

The place was a lot livelier than I had thought it would be. I’ve been to two LCCs now but both times on a weekday when the vibe was very low key. Clearly, if you want cocktails and a party on the weekend, this is the place to come. And it also explains why you can just rock up and chance your arm – people may book tables but there are areas to dance and plenty of standing room as well so you can likely squeeze in.

We were more interested in the drinking than the dancing on this occasion so we just stayed for two drinks before moseying on to another place to cross off the list.  Which is kind of a shame as the party seemed like it was only getting started when we were there yet it was already buzzing. One to return to I think.

We absolutely loved the idea of the sharing cocktails – there was one that came in a boat and another that was served in your very own dispenser sitting on a monkey’s head. These were a little out of our price range though so we just looked on in envy and awe at those who ordered them. Instead we tried some of the interesting drinks on the menu such as the butter beer - Camden IPA, vanilla Stolichnya vodka, caramel, apple and honey Jack Daniels. You’ll know I’m not much of a beer drinker but I could easily gulp this down. 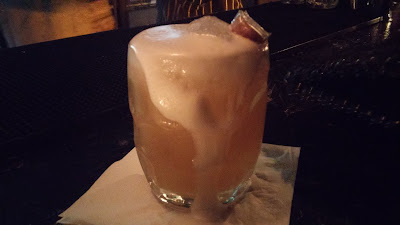 We also made sure to try the fortune cookie cocktail which was served in a bowl with chopsticks and a fortune cookie. This looked cooler than it tasted and I much preferred my old classic of espresso martini. Especially with bourbon biscuit pasted to the side! 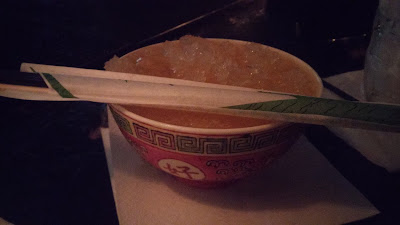 With that caffeine adding a spring to my step, we hopped off our stools and made our way to Hoxton to catch White Lyan before it shut.

White Lyan was the polar opposite of the atmosphere we had just exited. It was quiet to the extreme and we were served by the antithesis to the typical Shoreditch barman. No beard, no tats, just someone who was very obviously into the mixology behind the creations they served and very happy to spend a lot of time going through all the ingredients and processes while we quizzed him about every drink.

White Lyan is cold and clinical  and feels a bit like an 80s boardroom. Not really my style. Especially on a Friday night. I preferred the jumpin’ ambience of the LCC. However, the drinks were incredibly interesting and perfectly executed. The MO for White Lyan is pre-batched cocktails, the idea being they spend enough time getting the measures and combinations exactly right behind the scenes and then they bottle it and preserve it, so you don’t waste time waiting to get served. Considering how quiet it is, that part of it is probably something they don’t have to worry about, but the attention they spend in perfecting the drink is evident.

Each cocktail has something interesting about it and they’re all their own creation which made choosing the ones to have even more difficult than I normally find it. Eventually we narrowed down which sections we wanted to try and made our decisions. First up was something from the Fizz section. I had the seaside, an intriguing blend of tequila, yuzu, sea grass and avocado leaf soda. The yuzu and lime gave it a pleasant and light, slightly sweet and citrussy taste, while the avocado and seagrass made it very refreshing. Carolyn ordered the High Street which had elderflower champagne, blueberry vinegar and vitamin C. It was a bit like an alcoholic berocca and the discernible vinegar taste was actually nice! 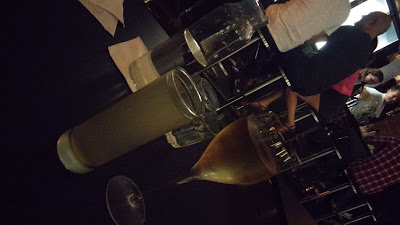 We decided to go cheap for our last ones – something from the £6 hi-ball section. Carolyn ordered the Cherry Cola and I had the Meadow Spritz. Her Cherry Cola was basically, a rum and coke but with a cherry twist and tobacco to give it some depth. My Meadow was also quite an easy drink – the white grape soda making it fruity and the bitters ensuring the meadow flower liqueur wasn’t too flowery and pungent. I was impressed by the range and creativity of the drinks here. Just a shame about the setting. 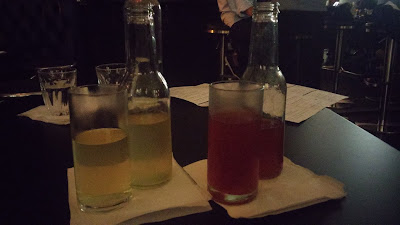