I went to Cuisson’s Pop-Down dinner at the end of June. Held in a basement coffee shop, it certainly had the transient pop-up feel to it, giving it a slightly guerilla atmosphere.

And the cooking was quite impressive, even if unfortunately most of the dishes weren’t to my own personal taste. 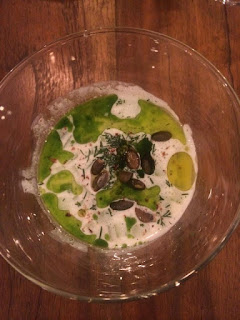 There were six ‘courses’ (if bread be counted as a course??). For each I would say the ingredients and combinations were very well thought out leading to well balanced dishes. They were the perfect idea for a summer’s day – all very light and fresh.

We started with bread and their own made cultured butter. I was so pleased my dining companion was late as it allowed me to eat all her portion as well. It was exquisite. Then came the first real course – described as yoghurt with cucumber and anise, this was served almost as a gazpacho – a very thin soup. I don’t like yoghurt but luckily the other flavours counterbalanced this and I found it did taste quite nice – like a ‘souped up’ (excuse the pun) tzatziki. I couldn’t quite get over the fact I was spooning very thin yoghurt into my mouth however, which wasn’t the most pleasant sensation.

After this was something I could easily tuck into – ratte potatoes with hay, grelot tops and umami, closely followed by duck liver, thankfully served in pate form. This was spread onto a homemade cracker and was a very rich, savoury taste and my favourite (apart from the bread) course of the evening. The chunks of pineapple were a good foil to the deep ducky taste. 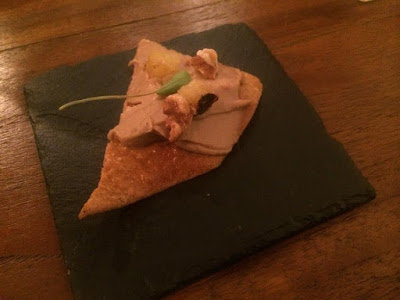 Next up – octopus pil pil with mustard and wild rice. Again something I would never order for myself. I think if you liked octopus then this was probably a good example of it. And it was at least sliced and presented in such a way that it was very easy to forget what it looks like in the natural world. It was now we began to realise all the courses so far had been cold, which we thought a little odd. I don’t think this was meant to be a feature of the night, but perhaps had something to do with the facilities available to them. It meant that I felt vaguely dissatisfied with the meal after, wishing I’d had at least one piping hot, filling dish. 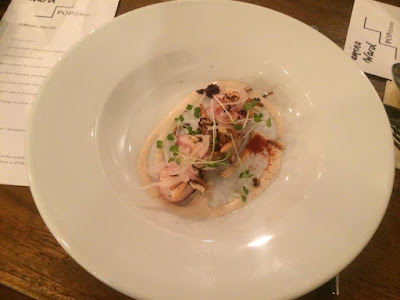 Instead what I had as the final flourish was a lukewarm piece of salmon with horseradish cream/mousse. The horseradish was light and fluffy, and, most importantly to me – subtle. The fish was firm yet translucent. An accomplished dish but not one that rocked my particular tastebuds. 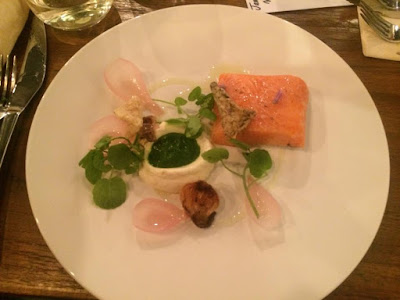 The dessert was similarly light and summery with a lychee and mango bavarois. It was so light and airy I felt I practically inhaled it rather than ate it. Very pleasant and a refreshing finish to the evening’s meal. 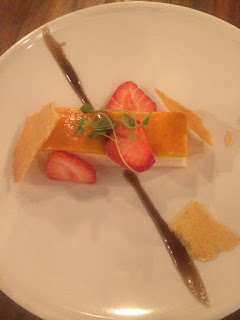 The aim of the pop-down was to create a relaxed and somewhat interactive dining occasion and it sort of worked. The chefs introduced the meal and you were free to take a wander and have a look at what they were doing, as well as them circulating and checking on you. Service was attentive and warm. As a supper club experience it was quite fun, and we chatted to the fellow diners on our table. Cuisson also do a dessert-only version which I think would be worth checking out, and they regularly change the menu so if the one I have described doesn’t float your boat I reckon it would be worth taking a punt on another evening.

After our grown up meal, I went back to Cocktail Trading Co and proceeded to get really quite pissed for the evening. After this we went up to Cherry Cola in Camden to bid farewell to the Purple Turtle. This indie institution was closing its doors forever and Cherry Cola, the indie night were seeing it off. We got there and caught the tail end of the final live band and then they plunged into some very decent indie and indie-tinged pop. Everyone was bopping and dancing and jumping about and I am very pleased to say Cherry Cola hasn't ended with the Purple Turtle - you can find it resurrected in East London at The Macbeth these days.
Posted by Ginglesnuff at 3:01 PM